Kitchens within open-plan living spaces are often pared back so their more functional aspects don't intrude on the space. This kitchen takes the idea one step further. All the appliances are tucked out of sight in an adjoining scullery, leaving the island as the centrepiece, which is just what the owners ordered, says kitchen designer Mal Corboy. "The kitchen is an integral part of the living area in a new clifftop house designed by architect Lindsay Mackie of Archimedia," Corboy says. "The space is framed by travertine marble, and this set the scene for a dramatic island centrepiece. The owners specifically requested an island that would look as though it was floating." Corboy says he took his design cue from the waves in the ocean, which can be seen from most rooms in the house. "I played with the idea of using thermoformed solid surfacing to create the base of the island. After various experiments with the material, the final shape was chosen -- the arc of the wave-like form was designed to leave enough room for people to sit on bar stools at the counter." The designer says the base is illuminated from within, with multicoloured LED lighting able to transform the room. The lighting also enhances the sense of translucency, so the island appears to float. Solid surfacing forms the 8mm island top as well. This is inset with selected South African zebrano wood veneer at the sides, similar to the cabinetry veneer. The joins are mitred to create a seamless finish, and the veneer is bookmatched with the cabinetry on the inside of the island. "There is a lot of fine detail that helps to give the kitchen a very crisp, clean feel," Corboy says. "The rear cabinets, for example, are separated by a pencil line detail of solid surfacing material -- the benchtop appears to turn down on each side like a waterfall feature that abuts right up against the two tall cabinets." The designer says the fine white line breaks up the expanse of wood veneer, helping to define both the base cabinets and overhead units. A white colourbacked glass splashback heightens the sense of contrast.

This kitchen features a multitude of special features and materials, and hides a complete laundry
Bookmark0 Save0 Share0 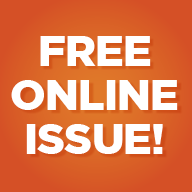