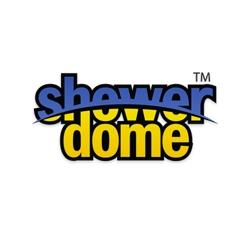 Showerdome is a clear acrylic dome that simply attaches to an existing shower cubicle to prevent steam from forming in the bathroom.

Showerdome was invented in New Zealand by Ken Evans of Tauranga, and is a 100% New Zealand owned and operated company. All Showerdomes are still manufactured in Tauranga, New Zealand.

One night at home in Tauranga, Ken Evans Showerdome's inventor was watching rugby on TV. At half time he got up to make a cup of tea. While the glass kettle was boiling he noticed that whilst there was steam coming out the nozzle, there was no steam inside the kettle above the boiling water.

It suddenly dawned on him that steam isn't created until the hot moist air collides with the cold air from outside. Just like clouds are made when warm air rises up until it reaches a cooler air layer where it condenses into visible moisture droplets.

Then Ken realised that the same principle must apply in his bathroom shower. So he rushed into his basement and found a piece of material to put on top of his shower. He turned on the hot tap and even after half an hour there was no steam in his shower or bathroom. For years Ken had been trying to deal with steam using heated mirrors, extractor fans and heaters. Now he had no need for any of these expensive and ineffectual gadgets because he had found the secret to not having any steam to start with.

Ken never got to see the second half of the rugby, or finish his cup of tea. Since that day, Ken and Showerdome Ltd have developed a very sleek, inexpensive, acrylic dome that creates the same barrier and can be fitted on most home showers.


How does it work?

To create steam 2 components are required. Warm moist air (coming out the shower rose), and cold air (in the bathroom). It is only when these two components meet, that steam is formed. Warm water on it’s own can’t make steam.

By placing a Showerdome on the shower cubicle, the cold air in the bathroom can’t get in to mix with warm moist air that the shower creates, and therefore NO steam is created – either in the bathroom, or in the shower cubicle. You end up with a warm toasty shower cubicle, and a dry steam free bathroom. There are 10 different shapes and sizes of Showerdomes to fit most exisiting and new showers on the market. Each model is blown on to a blank of either 1m x 1m or 1.2m x 1.2m square, and is then trimmed to custom fit at the time of installation. Showerdome is made of a high grade acrylic and is guaranteed to stay crystal clear for 30 years.

Watch: Ross Van Horn from Showerdome on the Beat Goes On