In designing the three bathrooms on these pages, the architect was told to create something unexpected and exciting – a design the client had never seen before.

It's probably every architect's dream to be able to explore a variety of concepts outside the box, and that's exactly how it was for architect Matthew Bremer of Architecture in Formation.

"The apartment is in a New York loft that was once a warehouse – many of the original features still remain," he says.

Bremer chose to play up this aesthetic, using a simple palette of materials for each of the three bathrooms. In the guest bathroom, shown at right, large-format quartzite slabs reinforce the sense of the concrete shell of the former warehouse. These are teamed with pure white wall tiles and a white Thassos marble vanity.

"The owner wanted a guest bathroom that would rival the amenities in a five-star hotel," says Bremer. "So every detail has been addressed. For example, the floor of the shower is seamless. The water drains away through a slot concealed by the curb." 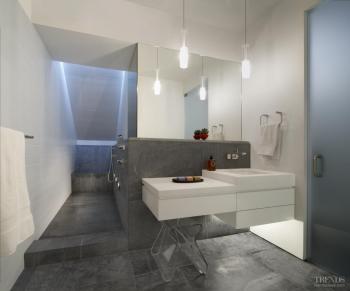 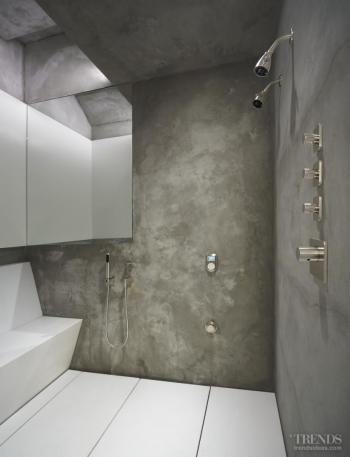 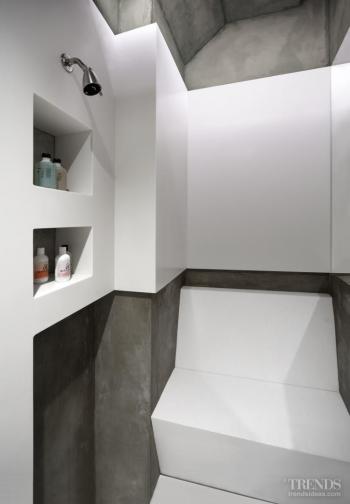 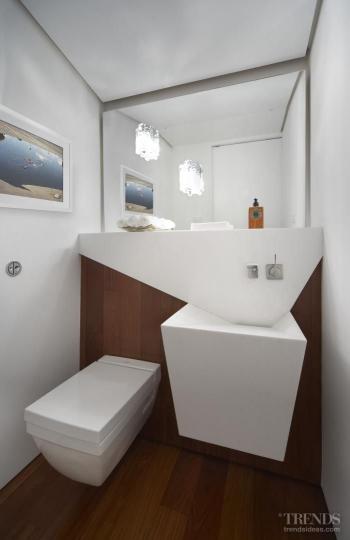 The architect was able to increase the size of the room by extending the shower into a formerly hidden cavity beneath the stairs outside the apartment. This created space for a bench seat and separate hand shower.

Dark gray hand-troweled concrete walls and giant paver-style tiles feature in the shower of the master bathroom, enhancing the raw concrete look. In this room, a ribbon of white Corian from Nieuw Amsterdam wraps around the top of the room, like folded origami, enclosing shelving niches and merging with a mirror.

A separate powder room is also cause for head-turning. Here, white Thassos marble forms a sculptural vanity, with the water falling into an inverted pyramid-style wading sink. This room has a floating ceiling, which enhances the aesthetics while concealing mechanical services.