For many professionals, the advantages of a city residence cannot be overstated. From an historical custom that saw members of the nobility set up residence in the cities during the social season, the modern downtown condo has become a more multifunctional space.

Remodeled for the current owner, a prominent surgeon with his own practice, this residence serves as a place where he can take time out during the day to escape the pressures of his profession, says architect Woody Vaughan of Norwood Architects.

"The original idea behind the remodel was to create a Zen-like retreat that offered a multisensory experience.

"While that lies at the core of the design, a range of other considerations came into play, such as the need for a space that could be used to entertain friends and colleagues during the evening, and where my client could hold meetings with prospective employees or industry representatives during the day."

One of the key factors in ensuring the space works successfully for each of these requirements is the kitchen. Vaughan used the remodel as an opportunity to turn the formerly enclosed area into an open-plan kitchen that could go from casual day-to-day use to catering for large groups. 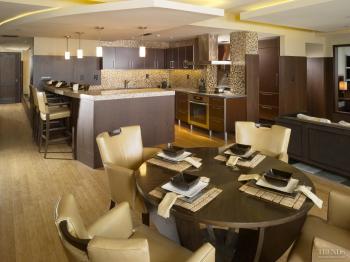 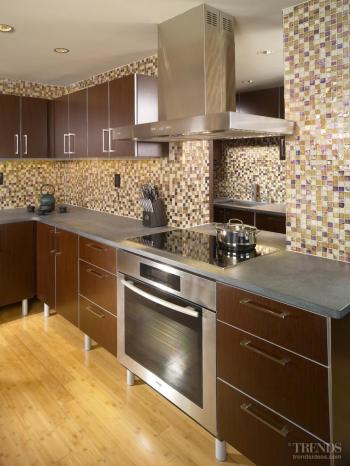 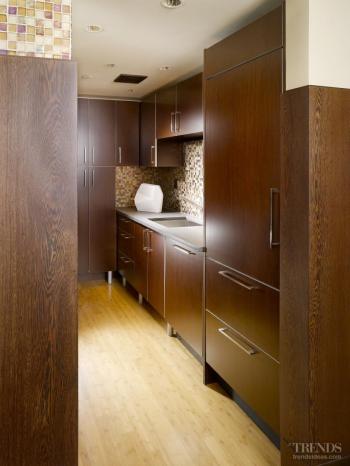 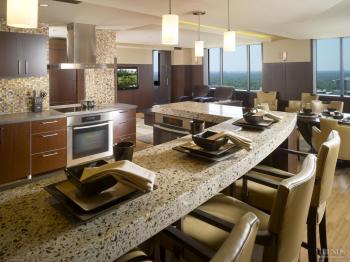 "A large kitchen with ample serving space was always part of the design," says Vaughan. "As we had to work around the existing plumbing, we developed the idea of a catering kitchen that could be used to augment the main kitchen."

While both can function independently of each other, a pass-through enables the two kitchens to work together.

Visually, the use of wenge for the cabinetry in both areas creates an overall cohesion, as do the tiles. These were chosen for their luster as much as to act as a counterpoint to the wenge, says Vaughan.

"The overall aesthetic is executive and masculine, and the use of wood throughout the entire space contributes to the corporate boardroom ambiance – a sleek business vibe that works well when that is its intended use.

"By introducing the tile with its mix of purples and golds and metallic sheen, the space is transformed, especially in the evening, into something more reminiscent of a club, perfect for socializing.

"Teamed with the other surface materials, the wood and the tiles work together to add warmth to a modern, clean-lined space that through the simplicity of its design is actually a very multifaceted environment – by turns a work space, a restful haven and an entertainer's domain."