With exposed brickwork and wooden beams, this renovated apartment has a New York loft aesthetic

With exposed brickwork and wooden beams, this renovated apartment has a New York loft aesthetic Discover this article's resources 0

There are two distinct design approaches to an historic makeover – one is to celebrate period elements and sweep the rest aside; the other is to emphasise the integrity of the entire building.

This renovation, in what was once the second floor of a Brisbane woolshed, frees up the good bones of the original structure built in 1934. Builder Kris Johnson says the owners wanted the reworked apartment to have the semi-industrial character of a New York loft. However, the interior clutter of an earlier renovation first had to be swept aside.

"This space has had several lives – it was a car park for a time, and in 1994 it was fitted out as a unit, with carpeted floors, white walls and a standard kitchen. Our work began by stripping the space back to the studs, retaining the original spotted gum beams and joists. We kept the existing windows, too, and sandblasted the brickwork to restore its bright hue.

"We then introduced distressed wood floors as a character feature that would also call to mind the building's origins. This was a major undertaking. For its role as a car park, concrete floors had been introduced throughout. We fixed battens to this surface and laid the French oak planks over that. To achieve the semi-industrial look, the wood was scraped by hand, stained and finally waxed."

With partition walls removed and the rustic floor installed, the apartment achieves the airy, loft-like aesthetic required. The owners also wanted an industrial-level kitchen as part of the open-plan space. Johnson specified a splashback and benchtop in stainless steel, and cabinetry in charcoal lacquer with a matt finish. 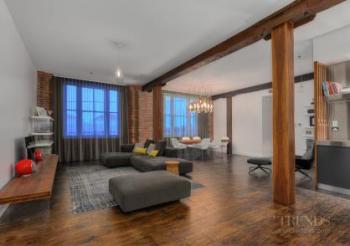 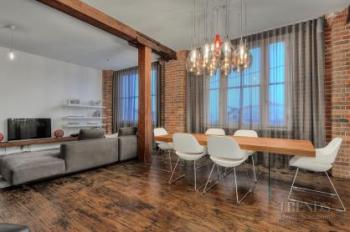 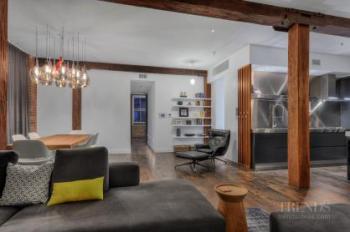 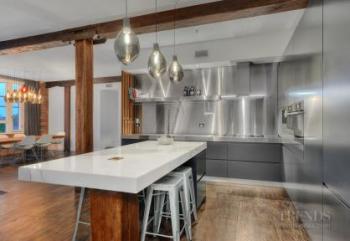 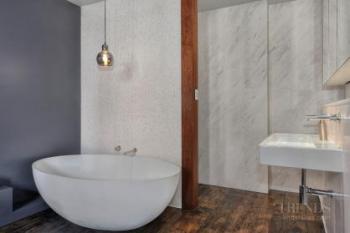 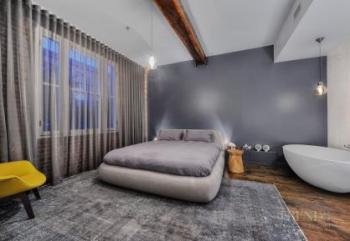 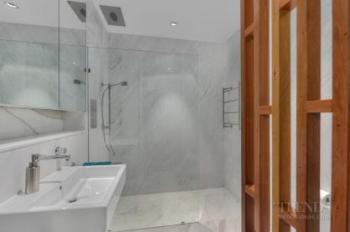 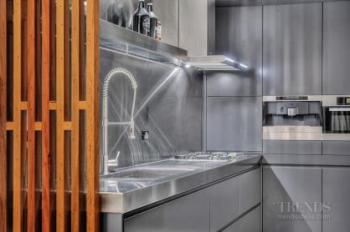 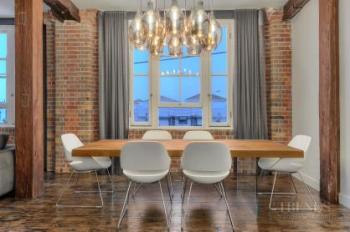 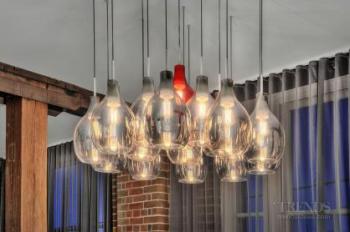 "The steel contrasts the rugged brick and wood, while the island has a foot in both camps. One end is supported by a cabinet and the other by a leg of solid spotted gum. The benchtop is in 20mm-thick Calacatta marble wrapped over a honeycomb panel to look like a 100mm slab.

A custom timber lattice screen stands at the end of the perimeter benchtop, softening the connection between the metal and wood elements, notably the timber floors, table and the spotted gum structural features. It also screens kitchen clutter.

The apartment has two double bedrooms, and a smaller bedroom that doubles as a study. All three are located down a short corridor that the builder aligned with the windows. These spaces also have raw brickwork, wood beams and soaring ceilings.

"Units in this part of Brisbane have become more sought after, but the size of the bedroom and bathroom in the master suite were not in keeping with current expectations," Johnson says. "In response, we took out the dividing wall and merged the two rooms to make one larger space – the sculptural freestanding tub and vanity are now on show to the bedroom. However, not everything is out in the open. You turn left at the vanity and left again to access the hidden toilet cubicle or veer right behind the vanity wall to reach the shower."

The understated interior complements the rugged, semi-industrial shell. The brickwork has touches of purple, as well as red, and the darker colour is picked up in the kitchen's stainless steel surfaces and again on the bedroom accent walls and rugs. Floor-to-ceiling drapes accentuate the height of the rooms and these also have hints of grey.

Industrial-style glass pendants feature above the kitchen island, the dining table and in the bedrooms. These are hand blown, with no two exactly the same.

"Being a corner apartment with five large windows, the finished loft-space is light-filled and welcoming," says Johnson.