With a little pizzazz – kitchen by Brian Snow

Many years of living in an apartment provides plenty of time to work out the best way to remodel the kitchen.

The designer-owner of this apartment, Brian Snow of SemelSnow Interior Design, not only knew exactly what he wanted when it came time to remodel – he had also had the chance to see what did and did not work for other residents in the building.

"The apartment is in a '60s highrise, which is very clean lined and devoid of any architectural frills," Snow says. "But there were structural constraints to consider, notably an existing ventilation grill and a long 6in x 6in beam that protrudes into the kitchen and living area. I didn't want to incorporate these things into the overhead cabinets as some other residents have done."

Snow says the design also needed to double the storage and provide a better connection to the dining-living area.

"The existing kitchen was L-shaped with outdated louver doors and a pass-through that also featured unattractive louver shutters." 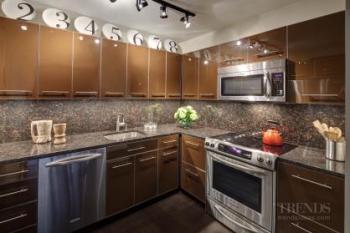 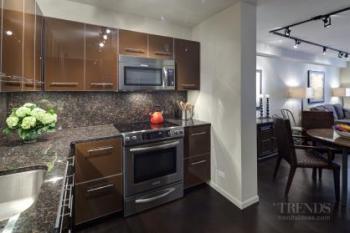 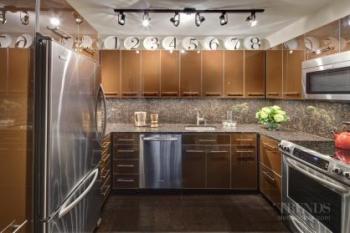 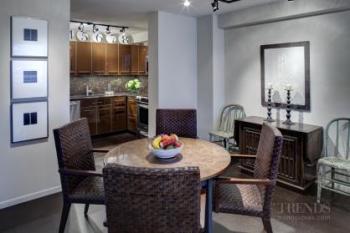 Snow's solution was to close off the original doors into the room and create a much larger, more central opening to the living space. He then wrapped the kitchen around the walls in a U shape, floating overhead cabinets off the wall, 12 inches below the ceiling.

"Keeping everything very open helps to make the kitchen seem larger, and the ceiling higher," the designer says. "The overhead cabinets are also 14in deep, rather than the standard 12in, so they can hold large plates and platters."

The designer specified backpainted glass doors and drawers, in chocolate brown. These are framed in brushed aluminum, which gives the cabinets a very crisp look.

White Melamine interiors have been customised with inserts that reflect Snow's attention to storage detail. Everything is also positioned exactly where it's needed, to streamline food preparation and cleanup for the designer, who loves to bake and cook.

The cabinets are teamed with Café Brown granite countertops and a matching backsplash. The flooring is also brown – Snow says the flecked surface does not show marks.

"The kitchen was fully customized by Tip Top Builders. Howard Dardick and Michael Hall were able to translate every concept."