Contemporary design is often characterized by excessive visual continuity, in which every room in the house is decorated in a similar way. For this refurbished apartment on New York's Park Avenue, the opposite applies – each room has a distinct personality of its own.

But architect Gavin Macrae-Gibson says this doesn't equate to a sense of separation. Rather, there are wide openings to encourage an easy flow between rooms, which is a strong contrast to the original design.

"Like most older Park Avenue apartments, this residence was large, but comprised of long corridors and enclosed rooms. There was no visual connection between any of the living spaces," Macrae-Gibson says. "Opening up these rooms was a way to improve this connection, and at the same time make them lighter and livelier. It also meant we could give each room its own personality – a narrative unfolds as you move through the house."

To achieve these changes, the entire interior was gutted and rebuilt – right down to the base boards and crown moldings. These now have a classical styling that is in keeping with the owners' collection of antique furnishings.

The classical note begins at the entry hall, which has been painted a vibrant Aegean blue. 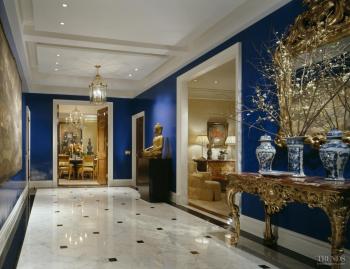 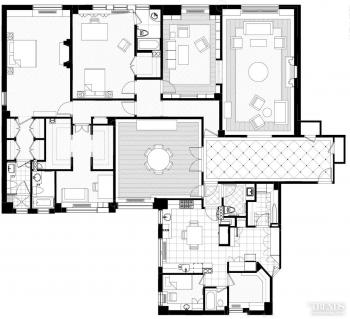 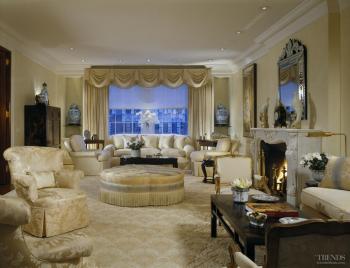 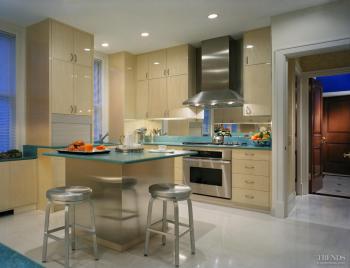 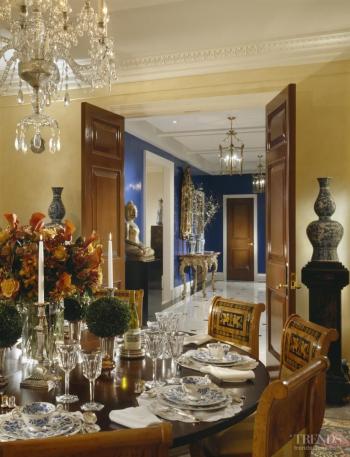 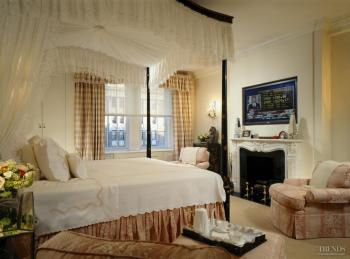 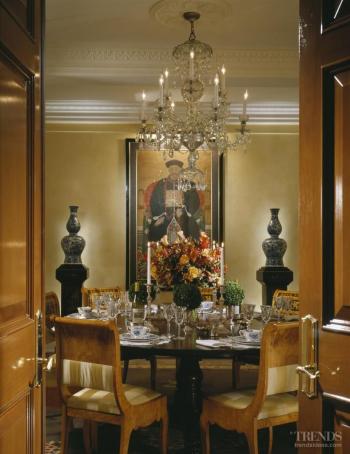 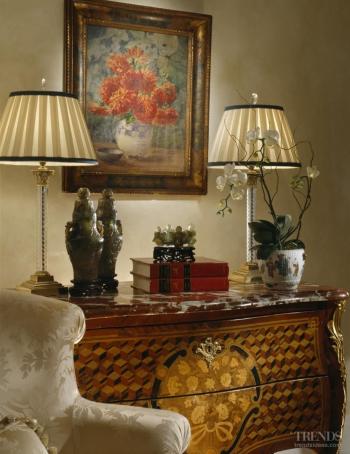 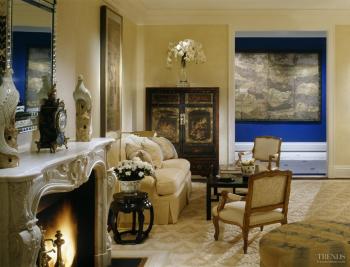 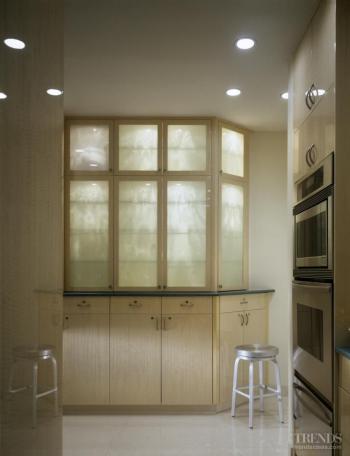 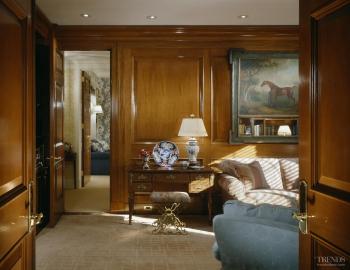 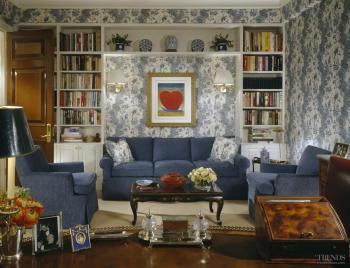 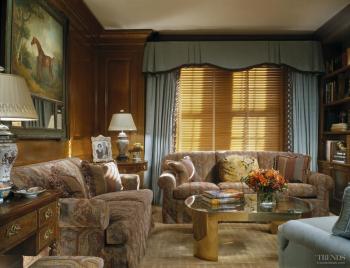 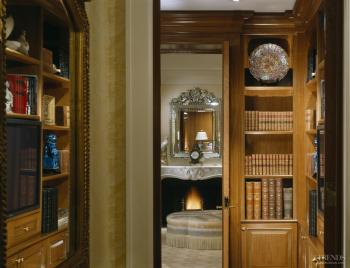 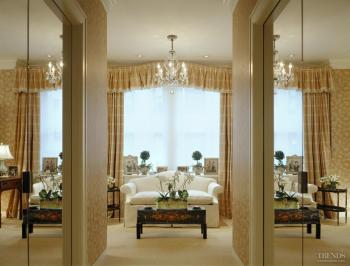 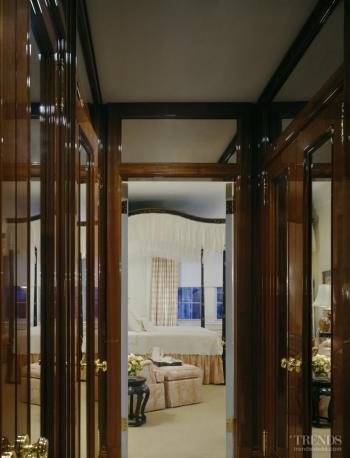 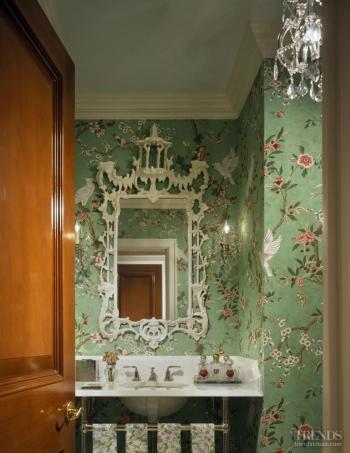 "One of the owners comes from Greece," says the designer. "The blue walls and crisp white millwork are evocative of the Greek islands. The lacquered walls even have a watery sheen that creates a sense of translucency and depth, which is fresh and arresting."

Marble – a classical material – features on the floor, with black and white tiles enhancing the drama. The entry also incorporates a large Oriental silk wall hanging, Buddha statue and an ornate rococo console.

"There is a degree of monumentality in the entry hall, which fits with the classical theme," says Macrae-Gibson. "We took great care with the proportions of the space – the openings to the formal living and dining rooms were enlarged in width and height to provide a more appropriate scale. It was important that people entering the apartment would feel drawn into the spaces. We wanted to create a sense of adventure and anticipation."

Macrae-Gibson says the larger openings allow people to glimpse the rooms beyond and create a visual overlay. The effect is heightened by several interior doors being positioned in a direct line of sight.

Colors in the formal living room are a light, subdued contrast to the bright entry. Shades of pale ivory and cream and lustrous silk upholstery help create an inviting, theatrical space.

"The living room was designed to be a very dramatic and grand reception room," says Macrae-Gibson. "We wanted to play up the wonderful vista of the street below, to create the sense of a social presence on the Avenue. The curtains are almost like a proscenium arch."

Key furnishings in this room include antique Chinese cabinets, a Venetian glass mirror with beveled edges, and blue-and-white porcelain.

"The colors of the porcelain echo the blue and white theme of the entry," says the designer. "The bright blue walls are also reflected in the mirror – there is always that visual link as you move through the apartment. The rooms are not isolated from each other."

In the dining room, at the end of the entry hall, full-height mahogany doors with polished brass hardware reinforce the grandeur of the formal rooms.

"It is amazing the difference between a 7ft door and a 9ft door," says Macrae-Gibson. "The extra height completely changes the scale and feel of the room."

An antique crystal chandelier and a Russian Biedermeier dining table and chairs from the 1820s enhance the opulent look.

The library leads to a small study decorated with blue-and-white wallpaper, white millwork and smoky blue sofas. Both rooms also open onto the entry hall.

"The flow between all these living areas creates a circulation loop, which is ideal for entertaining, as there is no cul-de-sac," says Macrae-Gibson.

For the master suite, the designer chose coral furnishings that match an antique peach-and-white Chinese porcelain collection. The suite includes a boudoir, dressing rooms and his-and-hers bathrooms, including a masculine high-gloss mahogany-lined bathroom.