Surrounded by forest yet minutes from the city, this family home nestles comfortably into its surroundings and out of sight

The renowned architect Frank Lloyd Wright said: "No house should ever be on a hill. It should be of the hill. Belonging to it." This idea sits well with principles of environmentally sustainable design. A building which suits its site so well that it hardly disturbs a single tree makes a smaller environmental impact. When native flora grows uninterrupted, the building seems as though it has always been there.

Such is the concept behind Ross and Melissa Bonetti‘s new family home. They chose a heavily wooded, hillside site with no previous development.

"If the trees weren't there we'd have an amazing view, but we love them. The house is so private," says Ross Bonetti.

"It does feel as though you are in the middle of nowhere," says David Battersby, "yet it is only five minutes from the water's edge and fifteen minutes' drive from downtown. The main building site is set back from the street, which was a significant advantage in our minds." 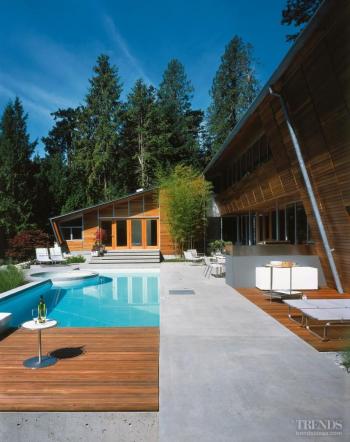 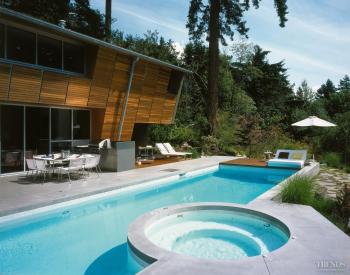 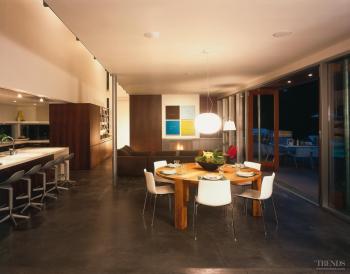 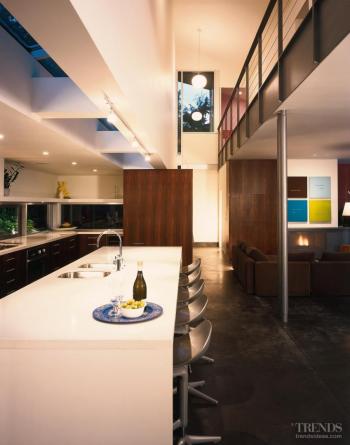 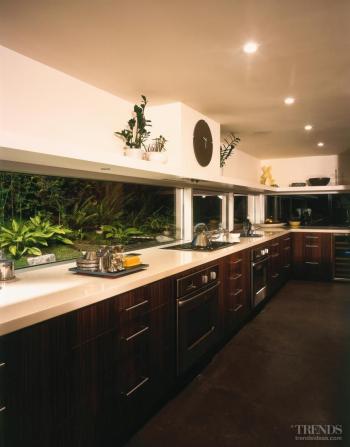 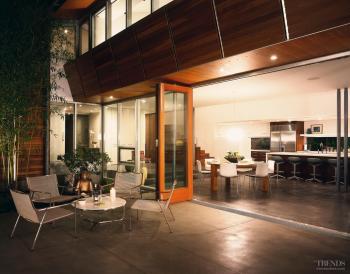 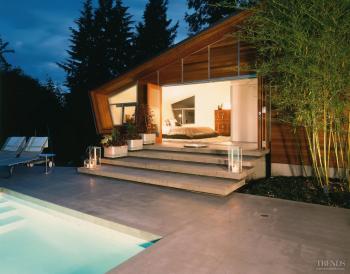 "We were immediately inspired by the scale of the trees, the exposed bedrock, the hillside and the driveway, which runs over an existing stream," he says.

Battersby Howat is aware of the impact architecture has on the environment.

"We try to limit this wherever possible," says David Battersby. "When landscaping is necessary, we try to do it in a way that compliments the architecture, without compromising the existing ecology."

Battersby Howat had a relatively simple brief: design something with a large social space that would also give the couple a degree of separation from their teenage children.

As Ross Bonetti puts it: "Melissa did not want to live in a modern, square box. That pushed the architects to come up with something quite different."

The Eastern references are fairly subtle: a stand of bamboo, mosaic tile around the front door, and rich wood veneer are used. A Buddha statue sits in the courtyard.

The final design is an L-shaped configuration which is two stories high on its long leg, and only one on its short leg. Far from being a box shape, the walls slope outwards, making some rooms feel triangular.

Battersby says, "the house is quite monolithic and modest from the street. Visitors are sometimes shocked when they come through the door, because the street facade belies the glamorous courtyard space. The relationship between the pool area and the interior space of the house is a clear reflection of the clients' social nature."

The walls facing onto the courtyard are clad in custom-milled cedar drop siding. There are aluminum vertical reveals between panels. This method of siding gives a sharp, modern look and allows shorter, less expensive pieces of timber to be used.

The long leg of the ‘L' design fits snugly into the hillside. From the kitchen window the immediate view of the vegetation gives the feeling of looking into a terrarium. In summer, bears come out of the woods – the owners once saw one from the kitchen window. Eagles nest in a nearby tree.

Walking through the living area to the courtyard beyond, you notice that polished concrete flooring is used inside and out, linking the spaces. With the doors open to the barbecue area on a warm night, the entire ground floor becomes a great space for entertaining.

The teenagers' space is up-stairs over the living area, with windows looking out to the pool. The ceiling in the corridor between the kitchen and living areas is double height.

"We thought we would need intercoms to speak to each other in this house, but you can stand in the kitchen and have a conversation with the children upstairs," says Ross Bonetti.

Steps lead down from the doors of the master bedroom, giving the couple direct access to the pool and hot tub.