Square colums, shalllow roof angles and slpit shutters all feature in this American Arts and Crafts-style remodel by Rill Architects that improves connections and natural light

Not every project starts with a grand vision. Sometimes it can be something as insignificant as an appealing angle on an existing home that becomes a catalyst for a complete style revamp.

Such was the inspiration for this renovation. A shallow roof incline on the original house led architect Jim Rill and the owners to choose a Craftsman aesthetic indoors and out.

Low-pitched rooflines are a typical feature of American Arts and Crafts cottages, and the bones of the home suited this style, says Rill.

"In other moves, we painted the red bricks so the revision would not look colonial, and finished the new upper level facades in complementary materials. The old shutters were replaced with new versions, and a trellis adds interest over the garage," says Rill. 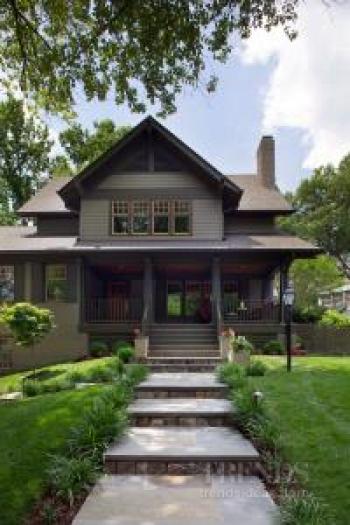 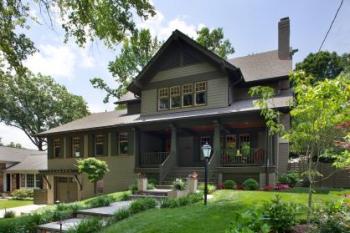 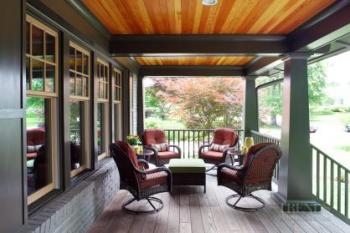 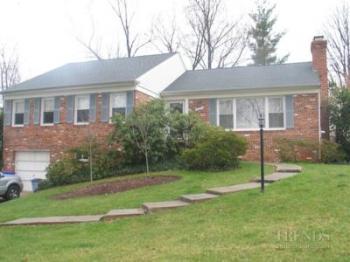 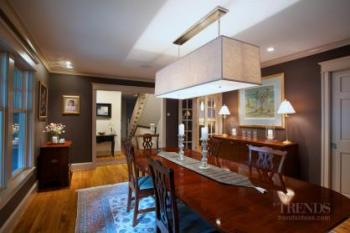 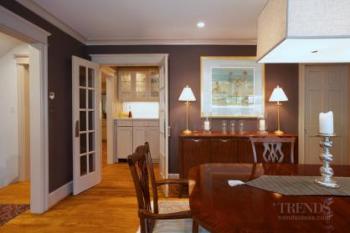 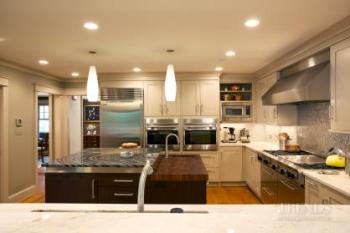 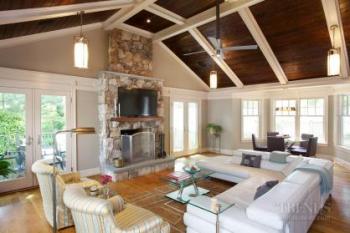 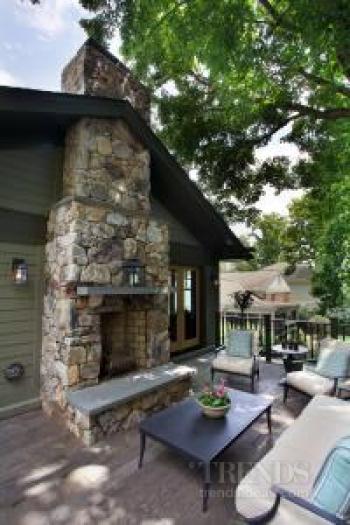 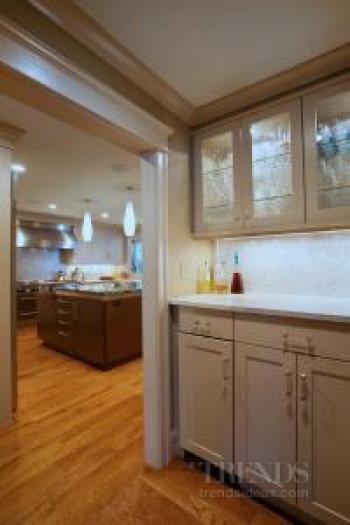 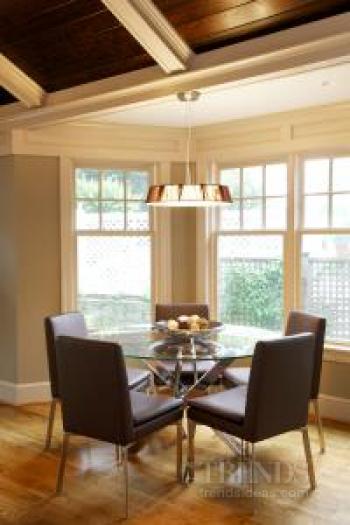 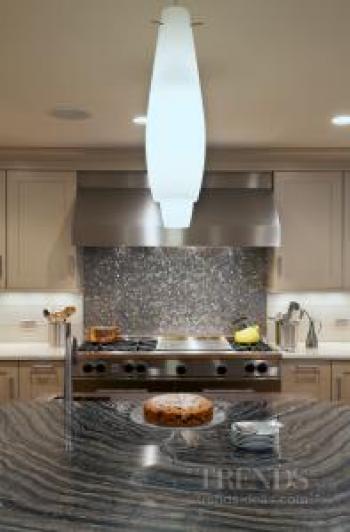 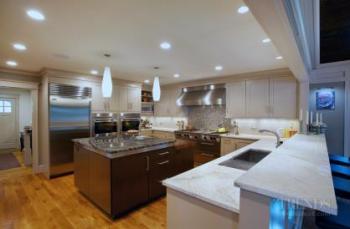 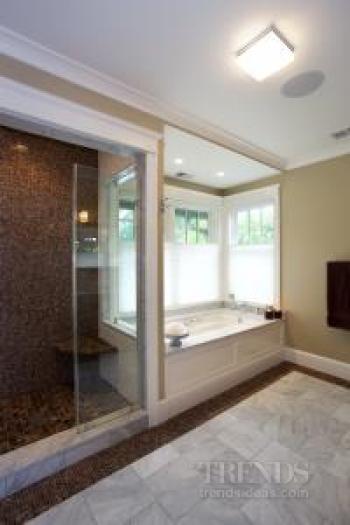 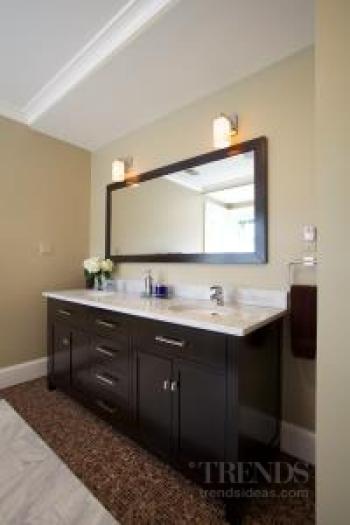 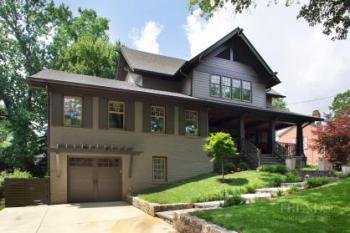 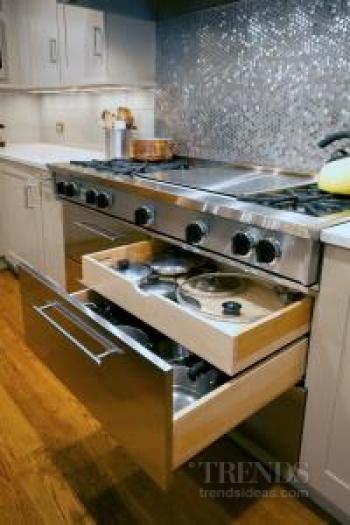 In terms of structural changes, the house now has a deep front porch, with a double-height family room and kitchen added to the rear. The new master suite is upstairs.

Rill says a major benefit of the renovation is the approachable scale of the house, and the way it now opens up to its surroundings. The low massing, facade detail and wide front porch keep the house in proportion to other homes in the neighbourhood.

"Adding a floor could have made the house overbearing, especially when seen alongside its neighbours. To avoid this, the mass of the upper level is broken up by a gabled form, in keeping with the style. The ample front porch acts in a similar way, breaking up the mass of the house at street level."

Indoors, the rooms were reshuffled to better suit the needs of the owners and to optimise flow, natural light and connections between rooms. The entry was reworked to improve the organisation of the spaces, and this now includes a stair to the master suite. The remodelled entry leads directly into the expansive dining area that was previously the living room. In turn, the original dining space is now a casual office beside the new kitchen.

"As one of the owners loves to cook, we created a professional-level kitchen with all the bells and whistles," says Rill. "This opens to the expansive family room, which has a soaring, double-height, stained-wood ceiling and stone fireplace – both typical Craftsman inclusions."

As with the house exterior, the interiors are repainted in stronger colours – a move that required a leap of faith by the owners, says Rill.

In keeping with the shift in design style, the rooms have simpler mouldings and more panels, as well as entablatures and side casings, detailing that furthers the handcrafted appeal.

The redesign also overcomes an oppressive disconnect between the interiors and exteriors. The front porch and the alfresco area accessed via French doors off the family room both offer valuable new connections to the environment, blurring the line between inside and out.

"Prior to the renovation the rooms were closed off from each other," says Rill. "They were dark, and poorly arranged. Opening visual as well as physical links to the outdoors is what really gives the home a fresh lease of life."

"Now, with extended sightlines and wider openings, you are never far from glimpses of green trees or lawn. Connections to nature in materials, views and spaces are all part of the Craftsman design aesthetic."