One of the more startling facts to emerge from laboratory space planning is that a full 80% of all scientific breakthroughs occur through casual interaction, rather than in laboratories or meetings.

Encouraging these connections was a major driver behind the brief for the Howard Hughes Medical Institute. The brief called for a research facility that would encourage a collaborative, interdisciplinary approach to tackle big issues in biomedical science. And as the building was designed before its research focus was decided, it also had to be flexible, says architect Jay Bargmann of Rafael Viñoly Architects.

"It was an intelligently worked out and imaginative brief – the client had thought about how the campus could work as a community. There was a clear sense that very small groups of scientists needed to work together to get results," he says.

The site for the Janelia Farm Research Campus had some limitations. Planning constraints meant that views needed to be maintained across the nearby Potomac River, and no building was allowed on the site's fragile wetlands or flood plains. But the architects had freedom to explore low-rise options on the site's 113ha of meadow and forest.

At the heart of the design solution is the 305m-long curvilinear building known as the landscape building. The building is inserted into the hillside, with three descending planted terraces, and a large green roof that helps it merge into the surrounding meadow. 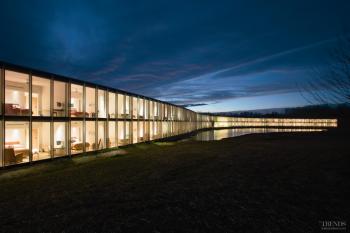 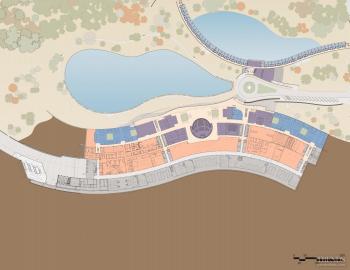 "The site allowed us to follow a key principle of good laboratory design – a long, low building that allows research to be carried out on one or two levels. This allows for much better communication than you typically get in high-rise buildings," says Bargmann. "Operationally and architecturally, we were fostering a flexible community of scientists who would talk to each other informally."

The laboratory building's two large uninterrupted research floors are linked by a single corridor and punctuated by two skylit staircases that lead to the green roof. Scientists can look out through 27m-clear spans to the landscape, or see through interior glass walls to locate colleagues and project leaders easily.

"One of our planning principles was that each lab group was clustered around square pods, with a central space for meetings," says Bargmann. "These are semi-private zones – this project is about collaboration, not privacy. Other subtle clues operate on campus, such as a set time for lunch in the cafeteria that forces scientists to eat together and meet other people."

Flexibility for future research directions was also factored into the design, to avoid the costly refits normally associated with new research projects. Six-metre wide corridors were specified to allow oversized kit to be taken to the relevant area without disrupting scientific activity. Benches, desks and computer workstations plug into a grid that runs under the length of the floor, allowing them to be reconfigured easily. Only bollards with electrical and gas connections are fixed in position.

Another key requirement was for the project to be environmentally sustainable. The campus is pedestrian orientated, which reduces car use and encourages more informal communication among the scientists, half of whom live on site.

The 1.6ha green roof allows 95% of the site's storm water to run off into one of two man-made lakes created for the purpose, thus minimising drainage into storm sewers. The roof was planted with native, drought resistant plants. Two layers of PVC and a network of irrigation pipes trap the rainwater when it rains and irrigate the lightweight growth media.

"We carried out research to determine the minimum soil depth, while still holding the storm water. The whole site is sloped to allow water to run off into the two lakes, and water circulates between the two so that it does not become stagnant," he says. "Having a green roof provides acoustic control and cools the building."

During construction, excavated soil was recycled to create naturalised meadows on site. Excavated rocks were crushed and used as aggregate for the project's concrete. All trees cut on site were recycled for mulch or flooring, or chipped for waste-to-energy plants.

Further sustainable design measures include the custom designed boilers, which emit the lowest possible amounts of carbon dioxide. The building is oriented to the north, to avoid problems of glare. The extensive glazing means that artificial light is not needed for the laboratory benches during the day, thus reducing energy use. As the main building is built into the side of the hill, three sides of the building are surrounded by soil, which makes the building very energy efficient. And throughout the campus, custom-designed LED street lights were installed.

"It's still a very new technology, but the costs are coming down dramatically and LED lights are more energy efficient than before," says Bargmann.