When the heat is on

When the heat is on Discover this article's resources 0

New commercial buildings need to perform on so many levels today. As well as meeting programmatic requirements, they often need to meet sustainable design initiatives while still delivering an appropriate architectural response.

All these factors influenced the design of the new 5-Star Green Star Metropolitan Fire Brigade (MFB) Burnley Complex in Melbourne, a government facility for training and community safety.

Architect Andrew Rutt of Spowers Architects says the client wanted a building that would be readily identifiable with the MFB – a landmark building that would demonstrate a commitment to environmentally sustainable design and provide an innovative solution that would support emerging building and workplace practices. The facility also needed to establish a precedent for urban renewal in Richmond.

"The MFB saw this precinct development as an opportunity for reducing its environmental impact and furthering leadership in fire services training. Remediation of the brownfields site was an important consideration in this process. The site had been used for numerous applications over the years, including an abattoir, quarry and industrial yards."

Rutt says site constraints included a drainage overlay, easement and limited access. It was also hard up against the Monash freeway off-ramp. 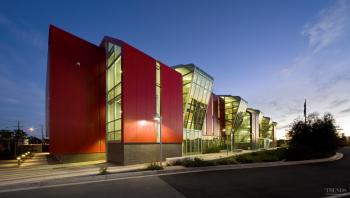 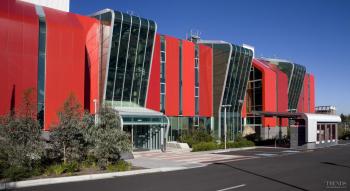 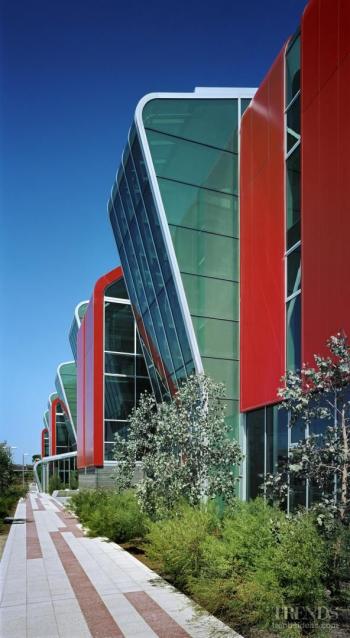 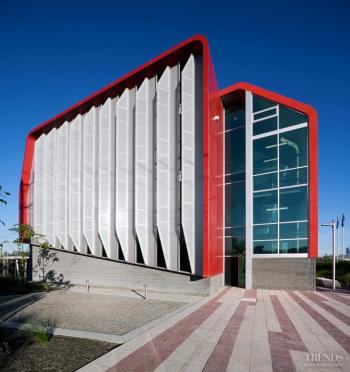 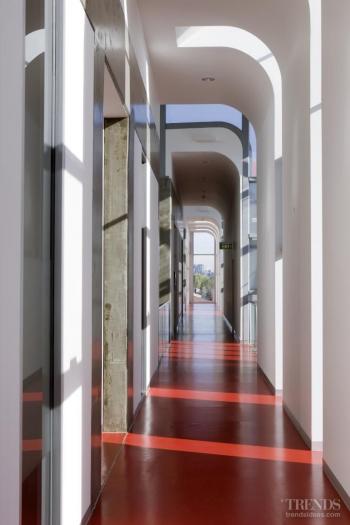 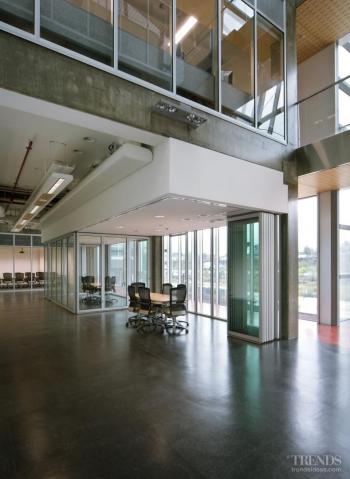 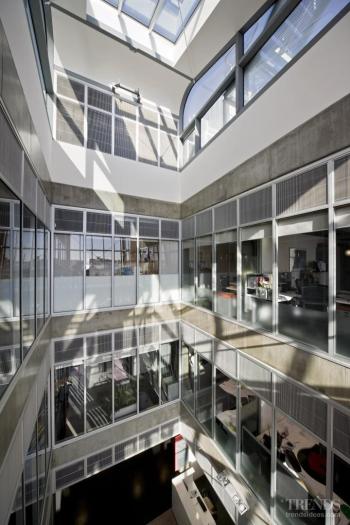 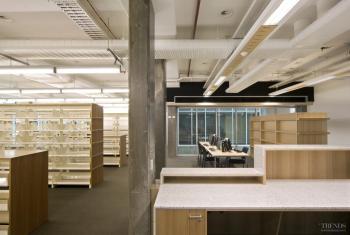 "The client wanted to challenge the perception of this location, by creating something bold and evocative – a building that would not only serve its needs but give something back to the community. It wasn't about fitting in – it was about providing a building that would contrast and contradict its immediate context while simultaneously promoting the presence of the MFB."

Rutt says the building and precinct were the result of a highly intensive and comprehensive integrated design process involving stakeholders and consultants. This process was critical for achieving the building solutions required in a commercial development designed to new performance specifications. The team undertook substantial modelling to determine the final form of the complex, to ensure it would perform environmentally, at both a passive and active level.

The administration building consists of three levels, with a total NLA of 3600m2. The building layout is based on long, narrow rectangular floor plates, extruded along an east-west axis for optimal northern and southern aspects, and to limit exposure to the western sun. The building is punctuated by a series of glazed atria that allow natural light to penetrate the interior. The atria also form part of the circulation system, and with glazed internal walls, provide a transparency between offices. A large corridor running the length of the northern side of the building provides an environmental buffer to the offices on the south side.

The angles of the walls on the north facade also play a passive design role, says Rutt.

"The angle of the atria glazing is a measured response to solar altitude in summer. The design allows light into the building all year round, yet in summer the angle of the glazing is such that the light is reflected off the facade, resulting in reduced solar gain."

A series of strip windows on the north facade helps to visually relieve the bright-red aluminium panels that define the exterior. They also ensure reduced natural light can penetrate the building without overheating the interior. The red panels include walls that are angled back towards the building. These panels enclose the stairwells, defining the functionality of the space within.

"The curved elements wrap the building to provide a simple breakdown of form, so the building is more legible," says Rutt. "They articulate what is happening on the inside."

The designer says the panels are painted in three shades of red to reinforce the corporate identity of the MFB. The selection of a facade system and finishes was a challenge. The design team worked closely with industry professionals to come up with a superior paint application process and finish.

The east facade, which fronts Burnley Street, features large, vertical fixed-glass fins. These have a ceramic coating that increases the shading coefficient and reduces the need for active heat controls.

Many additional initiatives have helped the project achieve a 5-Star Green Star rating for Office Design Version 2 and a 5-Star AGBR rating.

The building utilises a mixed-mode HVAC system, with the exposed thermal mass of hollow-core concrete floor and roof slabs forming part of the cooling system. Cooled air is forced through the cylindrical voids in the slabs, which run north-south across the building. As there is no suspended ceiling, the cooling within the slab radiates into the space below.

The five atria also play an intrinsic role in the climate control, acting as air transfer zones. Heat is funnelled up and out of the atria, which function as thermal chimneys, drawing fresh air through the building.

In keeping with the desire for natural ventilation, windows on the south side can be opened manually. The building management system continually monitors both the internal and external temperature, and alerts tenants when windows should be opened or closed. Windows in the corridor on the north side are automated. There are also automated blinds on the west side of the building, which help prevent overheating.

As the fire training facility on site uses large amounts of water, rainwater is collected from the roads, roofs and landscape. The potable-grade water is filtered through bioswales on site and stored in a 750,000-litre underground tank. The water is recycled after use and returned to storage. There is also a comprehensive solar water heating system provided for the training facility shower block, which preheats approximately 3000 litres of hot water per day.

Other sustainable design initiatives include double glazing and the use of non-toxic materials with no off-gassing. The exposed concrete slabs and columns also limit the need for additional finishes.