Supermarket design is undergoing a significant transformation – sustainability and a desire to enrich the shopping experience are key design drivers, as this Adelaide project shows

It's an established fact that the more time a customer spends in a store, the more money they are likely to spend. However, such wisdom doesn't explain the reasoning behind traditional supermarket design. Rather than encouraging customers to take their time over their purchases, harsh lights and intrusive public address systems are much more likely to make shoppers want to get it all over with as fast as possible.

That concept has been turned on its ear with the design of the new Fairview Foodlands supermarket in Adelaide, which has been developed by the Commercial Retail Group (CRG) and designed by Hames Sharley. CRG general manager Mike Rutherford says the company set out to challenge every aspect of traditional supermarket design – from the lighting and layout to the checkout.

"Enriching the shopping experience was crucial," he says. "To this end, we needed to provide value-added features and an attractive, market-style environment that would encourage shoppers to interact more with staff and spend a longer time in the store. We also wanted to set the benchmark for sustainable design, and provide an attractive working environment for staff that would improve on old-style stores."

Director David Cooke of Hames Sharley says the key design challenge was to provide a more personal market-style shopping experience within the large box format of a supermarket.

"Rather than having a consistent theme rolled out throughout the supermarket, we chose to create different areas that would have their own specific theme, much like you would see in a village market." 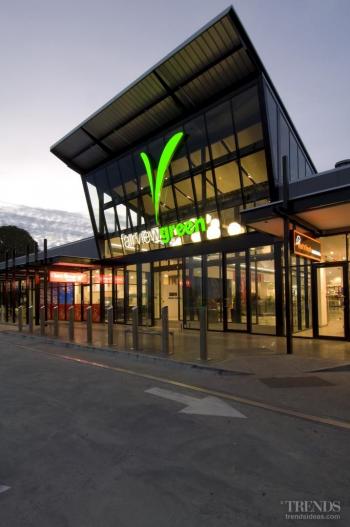 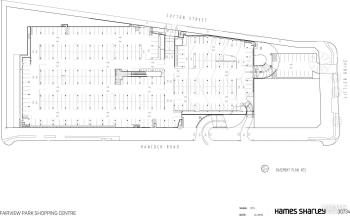 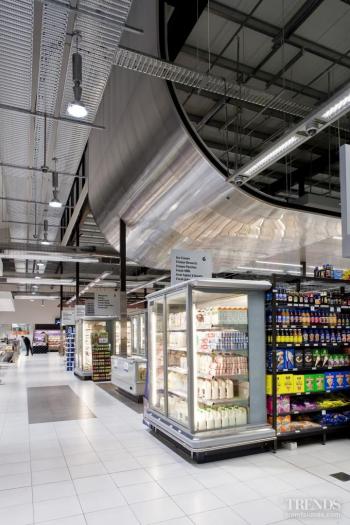 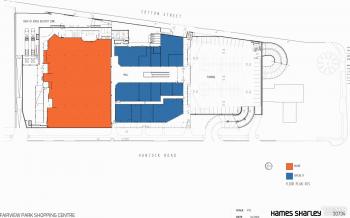 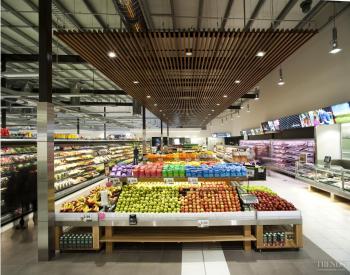 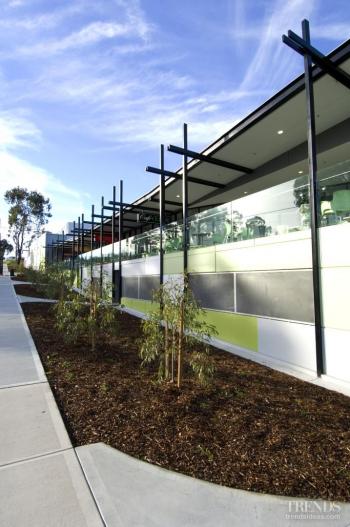 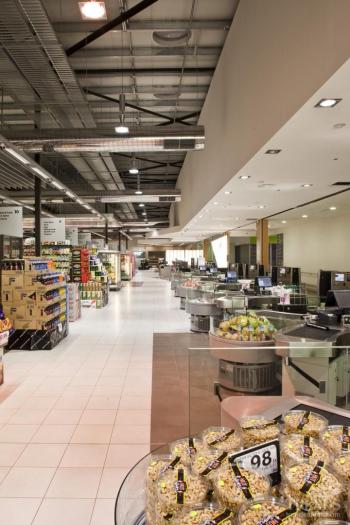 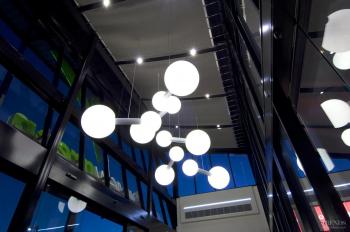 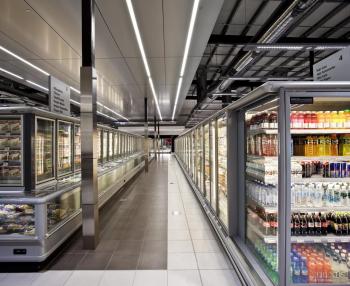 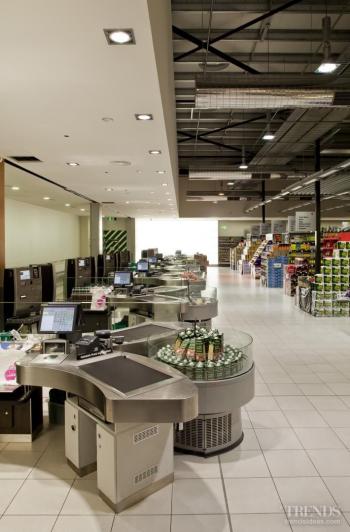 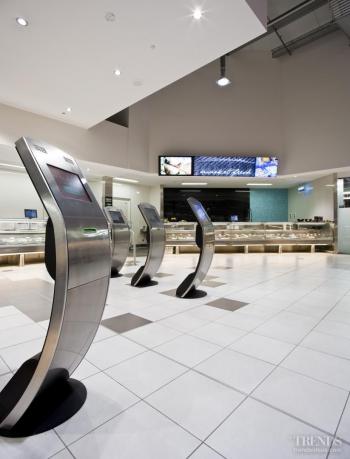 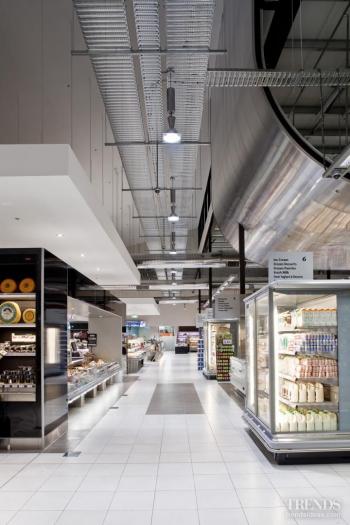 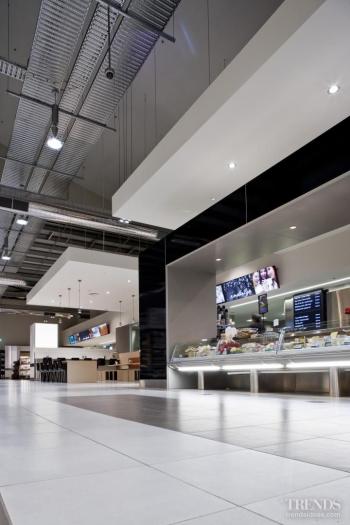 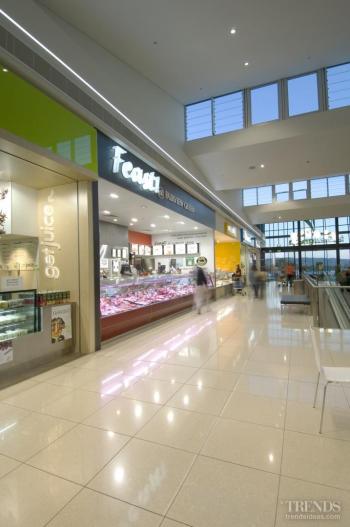 The changes are evident right from the entry, where shoppers are tempted by the welcoming aroma of coffee beans, which sets the mood for the shopping experience. Cup-holders in the trolleys allow customers to sip a drink as they move through the store. There is also a café where people can stop for a bite to eat, or to watch a cooking demonstration.

"We wanted to create a real sense of theatre and entertainment," says Rutherford. "People can watch the chefs cooking, just as they can watch the butcher preparing meat cuts on the butcher's block. There is much more interaction than in a traditional store."

To highlight the different markets within the market, a number of special ceiling treatments were introduced. Low suspended ceilings above the café help create intimacy, and support pendant lighting that brings a more human scale to this space.

Similarly, a suspended wood batten ceiling above the fruit and vegetable stands enhances the natural feel of the produce area. In contrast, a sleek, curved stainless steel ceiling element forges a visual link with the refrigerated goods section. This feature was also designed to prevent glare from the skylights being a problem for customers sitting in the café.

"Ensuring the personal comfort of shoppers was a priority," Cooke says. "From the materials used, the spatial layout and overall height of the ceiling to the amount of natural light and fresh air coming into the building, every aspect of the design was focused on creating a quality environment."

"The produce is still brightly lit, but the lights are much closer to the displays. There was no reason to have a massive flood of light over the entire store. We also ensured there is plenty of natural light coming in from the skylights. Sensor lighting in-store ensures energy is not wasted. As well, there are automated louvres to open and close the windows, so there is a constant supply of fresh air."

Cooke says the fresh air supply works in conjunction with air conditioning, which has also been designed with energy savings in mind – the project is currently being assessed for a four-star NABERS rating.

"Traditionally, supermarkets are heated or cooled to exactly 22°C. We have extended a temperature band in both directions. If it is 42° outside, and the interior is 25°, it will still feel very comfortable. Similarly, in winter, we can drop the temperature in the store by several degrees without compromising customer comfort."

Other sustainable design initiatives include CO2 refrigeration systems and ceramic tile flooring, rather than the more standard vinyl. Cooke says the tiles are easy to maintain and don't require the harsh, toxic cleaning chemicals used for vinyl floors.

New technology was also introduced to improve service and provide a more friendly operation. In-store terminals allow shoppers to pre-order delicatessen items if desired. And new checkout terminals increase the interaction between staff and customers, who stand next to each other, rather than on opposite sides of the counter.

"These are not self-serve machines. We place a high value on service," says Rutherford. "It's a much more friendly way to make a transaction. And with automated cash machines, customers can be confident they are getting the correct change."

Rutherford says customer time at the checkouts is reduced by more than 12%, and the feedback from staff and clients has been overwhelmingly positive.