This kitchen, on an apartment terrace, gives new meaning to the concept of outdoor entertaining

Whatever the weather Discover this article's resources 0

One could be forgiven for thinking that what you see is what you get when you buy an apartment. But, as this project shows, sometimes it's possible to extend living areas outdoors by semi-enclosing a terrace.

When Christchurch kitchen designer Ingrid Geldof was commissioned to design the new outdoor kitchen for the owners of this three-storey apartment, the large terrace had already been enclosed by glazing on three sides. In addition, a new roof with automated louvres and rain sensors had been installed.

"The owners – a family of eight – spent quite a lot of time on the west-facing terrace, but the space wasn't maximised," Geldof says. "They wanted an informal outdoor entertaining area with kitchen and dining facilities, and a television."

To organise the space, Geldof placed a symmetrical kitchen with an island bar in the centre of the terrace, between two sets of bifolding doors that open from the formal living area. A dining table is positioned at the south end of the terrace, and a casual seating area on the north.

In designing the kitchen, Geldof says she took her cue from the white Alucobond panels on the building exterior, which feature black pointing. 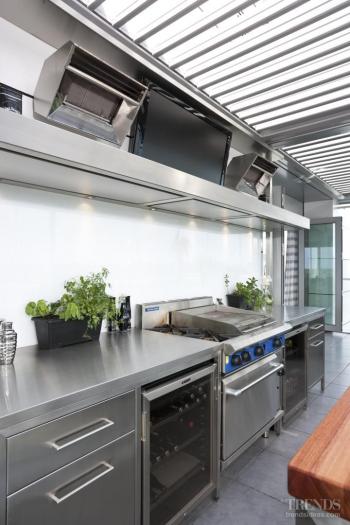 "The front of the island and cabinet sides have a Laminex Polar White surface with negative detailing in black, which integrates well with the building. But we also introduced a commercial look, with stainless steel-fronted cabinets that sit off the ground on narrow steel legs. Similarly, the commercial oven has steel legs.

"The kitchen is almost like a teppanyaki bar – the oven even has a large steel plate for teppanyaki cooking."

The oven, in the centre of the rear wall of the kitchen, is flanked by matching Vintec refrigerator cabinets. A custom-designed steel ventilation unit runs the length of the wall, enhancing the horizontal lines of the kitchen. Both the ducting and the motor of the rangehood are concealed within voids behind the wall and in the ceiling above.

Providing an expansive steel benchtop on the island as well as a saligna eucalyptus bar top ensured there is plenty of room for food preparation and service.

"The bar top is wide enough to accommodate plates and drinks," says the designer. "However, as there is no water plumbed to the terrace, all the clean-up is carried out in the main kitchen."

Waterproofing the kitchen was a priority, although the louvres automatically close when moisture is detected.

The cabinets are made from marine-grade stainless steel, which is wrapped around marine plywood. And the wood bar top and furniture can withstand water.