Change is one of life's certainties, but it's not always easy to accept. This can be especially true of architecture, when contemporary additions to historic buildings may be required.

For the design team at Gensler, commissioned to design a major addition to the neo-Gothic Fourth Presbyterian Church in Chicago, it was clear that a sensitive architectural approach was required. This included extensive consultation with everyone affected – architect Brian Vitale says not one line was drawn until this process was complete.

"Right at the start we discussed with church members the way buildings can tell stories. And we posed the question, what did they want the new building to say about them? They came back to us saying they wanted a contemporary building that would look forward to the next 100 years, rather than back to the past. There was a recognition that the existing neo-Gothic architecture sends a very formal message to people. The new building needed to be more relaxed – it needed to be warm and inviting to young people."

But there was little doubt that a modern design would be a dramatic contrast to the original church, which is the oldest building north of the Chicago River – except for the Old Chicago Water Tower.

The architect says the new building, known as The Genevieve and Wayne Gratz Center, needed to complement, rather than mimic the original church buildings. 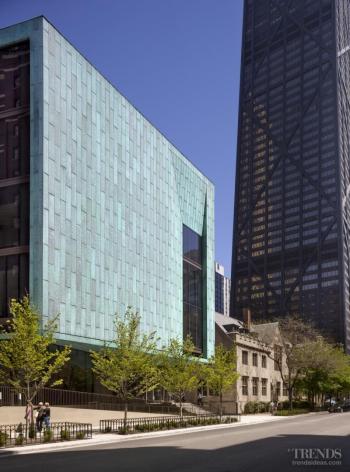 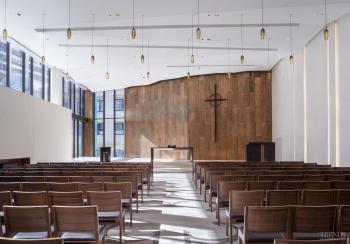 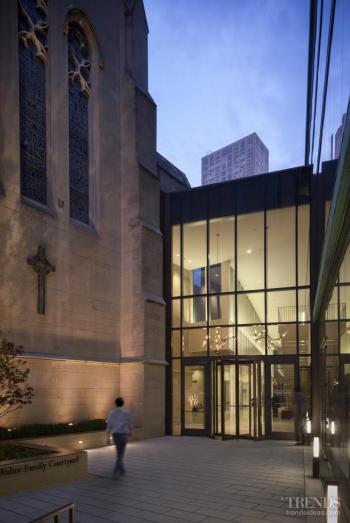 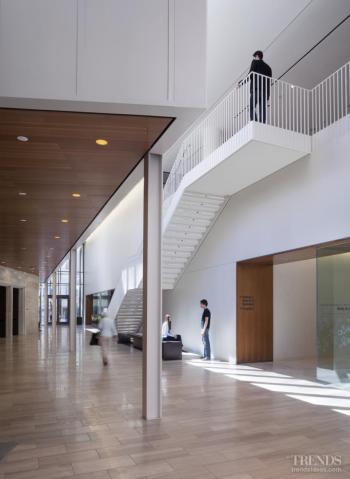 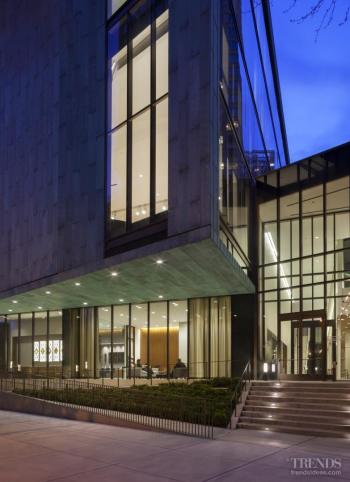 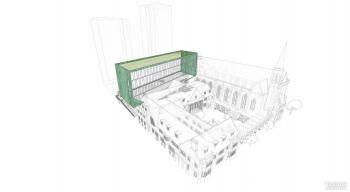 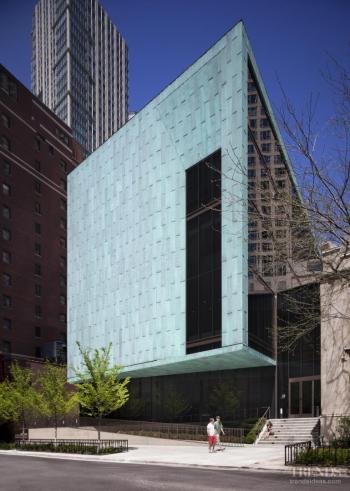 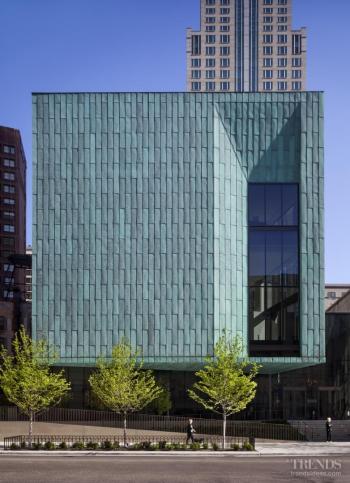 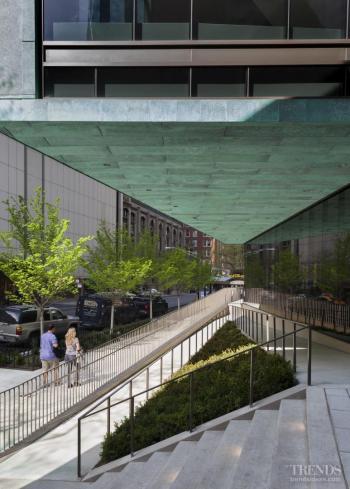 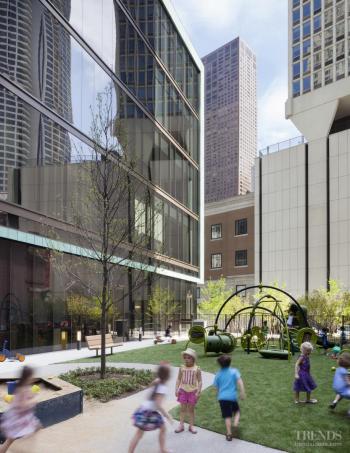 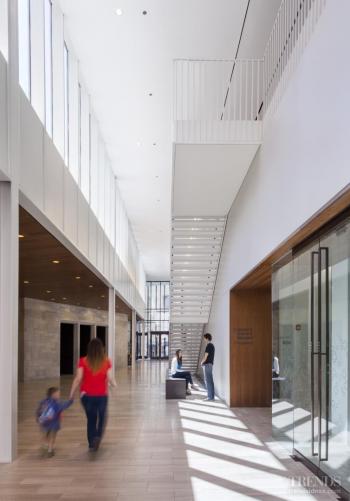 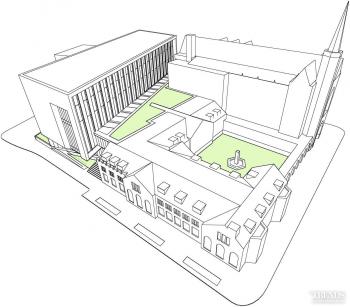 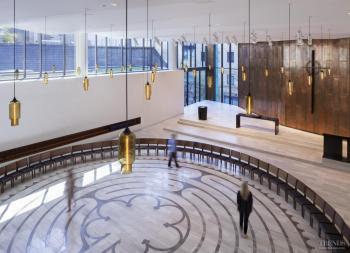 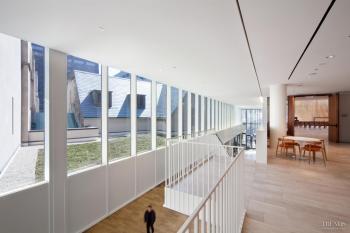 "We did not want to take away from the beauty of the traditional architecture – there was no way the new was going to gobble up the old."

Martin Sherrod, chief operating officer of Fourth Presbyterian Church, says acceptance of the proposed changes was helped by the fact that there was a desperate need for more high-quality space to accommodate the church's extensive outreach and social services programmes, and its cultural requirements. The church provides dinners and vocational training for the city's homeless, and one-to-one after-school tutoring for hundreds of children from under-served neighbourhoods.

"This is a city that really values its iconic architecture," Sherrod says. "But while the neo-Gothic architecture is charming and dazzling in its architectural distinction, it was not well suited to the needs of our programmes.

"Acceptance of the changes was helped by the community being able to see other contemporary additions to historic buildings in the neighbourhood. We also recognised the financial implications. A contemporary building was the most cost-efficient way to accommodate the existing footprint and the constraints of the site. And the consultative process was particularly helpful in giving our people a sense of ownership of the design."

Vitale says the location was a key consideration in the design. The church fronts Michigan Avenue, which is the most expensive real estate in the city – neighbouring buildings include the John Hancock Center and Palmolive Building.

Extensive photographs were taken of the existing church, including views from the 100-storey John Hancock Center.

"Green patinated copper was everywhere – we could see it on the roof, dormers and gutters. Then we discovered it on the downpipes, flashings and even on lanterns and handles. This determined the pre-patinated copper cladding on the new building."

The scale of the old church is also referenced in the new build. The height of the building is deliberately below the roofline of the church, and a recessed window on the front facade replicates the dimensions of the steeple.

"This window, which provides a view right into the chapel on the second floor, is of the same proportions – it is effectively the chapel's steeple,says Vitale. "The cantilevered design of the building is another reference to the work of the church and the way it reaches out to the community. The floating form also conveys a sense of the spiritual."

The architect says outdoor spaces create a buffer in front of the two opposing entries, one off Delaware Place and the other off Chestnut Street.

"This was another way the church could give something back to the community – we didn't build right up to the street. These are inviting, landscaped areas where people can gather."

The glazed entries lead into a double-height transition space, named the commons. This is an area formerly taken by two earlier additions that were removed. Removing these structures opened up new views of the old church, which have been maximised through large clerestory windows.

"It also meant some of the old limestone walls are now part of the inside of the building. The original scars and marks on the limestone are still there – you can even see the remains of ivy embedded in the walls."

The connection between inside and out is further enhanced by a copper wall on the inside of the new chapel. The copper panels echo the size and shape of the patinated panels on the exterior, but have a worn, rather than weathered appearance.

"This space needed to be flexible in terms of use," says Heiser. "The chapel is used for a variety of events in addition to services. And the church has a very robust music programme, so the acoustics were a key consideration. This is the reason why none of the walls are parallel. Even the ceiling has a folded, multifaceted plane."

For this reason also, the west wall could not be completely glazed. Instead, there is a solid wall on the inside of the glazed facade, with narrow slot windows in the wall creating a distinctive patterning. The slots are grouped according to significant days in the Christian calendar. There is also a subtle trefoil pattern in the Venetian plaster that is continuously revealed and hidden as the visitor moves through the space. A limestone labyrinth pattern on the floor is another key feature.

The lower level of the centre accommodates a lounge, dining facilities and a preschool that opens out to a new playground. This is elevated above the street, providing a safe, secure environment for the children. Administration offices and a choir loft are on the third floor, while the upper two levels accommodate lounges and meeting rooms, where tutoring takes place.

In keeping with the need for LEED certification, the centre incorporates many sustainable design initiatives, including a green roof, high-performance glass, maximum natural light and a variety of water conservation measures.

"The changes have been transformative," says Sherrod. "The centre meets the needs of our very ambitious social services programme, and is enabling us to deliver on our cultural commitments to the arts and music. There is so much more we are able to do for the community."