A tropical climate poses a few challenges for architects looking for sustainable design solutions. Adequate cooling is an obvious priority, but houses also have to accommodate rain storms and high humidity.

The owner of this house designed by Wallflower Architecture + Design was eager for the design team to explore natural cooling alternatives, says architectural consultant Cecil Chee. At the same time, it was essential to maximise the great views from the site, which is at the end of a long, sloping driveway.

"We noticed the best views were from the upper level of the original house on the site, which started us thinking about inverting the way the living spaces are used. This led to a plan to put the living room on the second floor."

The deisgner says the team, which is renowned for designing houses that respond to the climate, believed a water-cooled house would be the best option. But the need to have the living areas on the upper level interfered with the idea of a house that would be cooled by the breezes coming off large ponds.

"This sparked the idea of bringing the water right up to the living area," says Chee. "So the second floor takes the form of a large, glass-walled floating pavilion set within a large, rooftop pool. 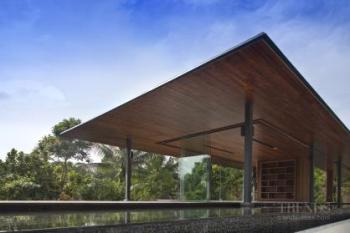 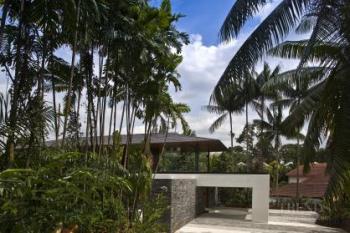 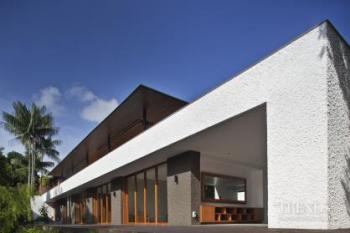 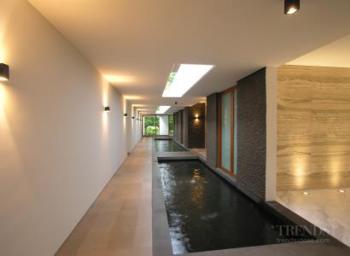 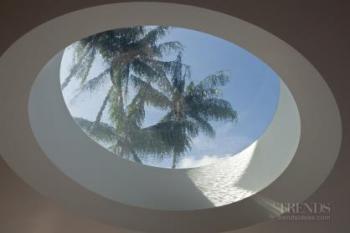 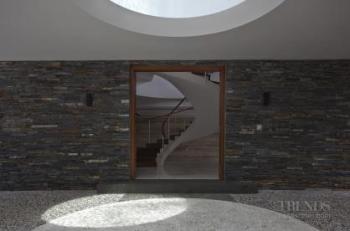 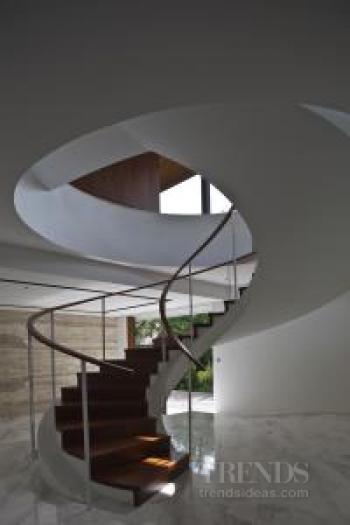 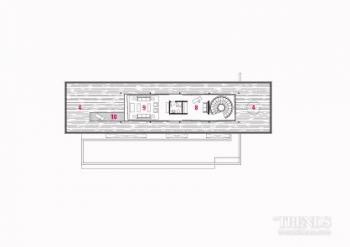 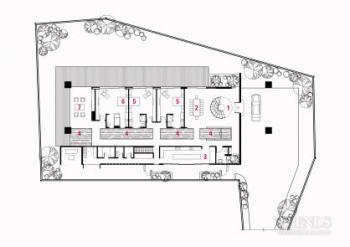 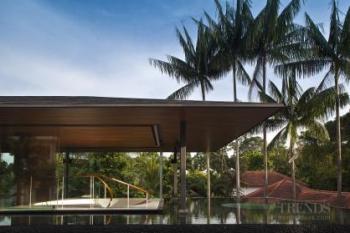 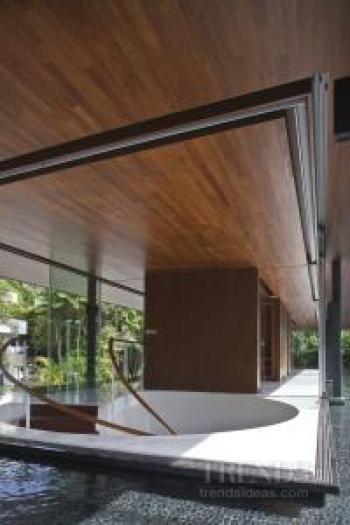 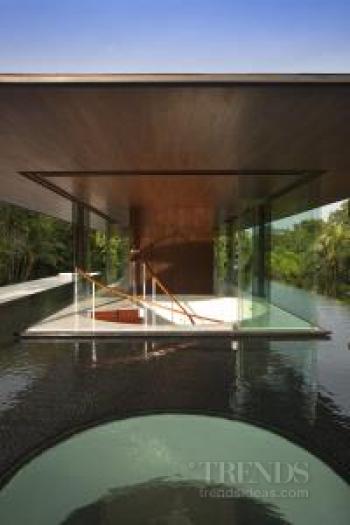 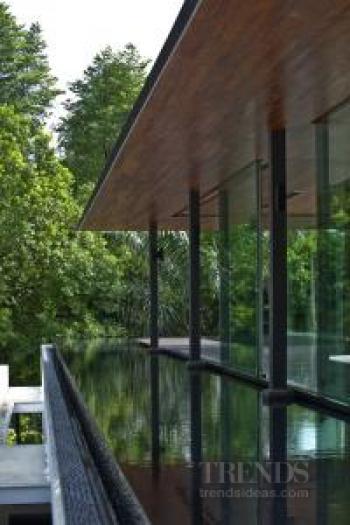 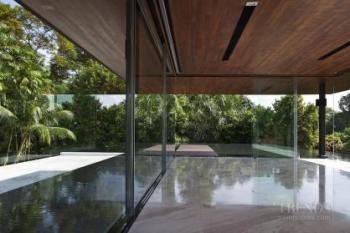 "The water creates a reflective boundary for the building, with the infinity edges blurring to merge with the tree canopy and sky. This focuses the eye on the outlook. At this level the house itself is very transparent – it is little more than a roof over your head. With all the glass walls opened up, the pavilion is cooled by the breezes coming off the water."

Chee says these breezes are created naturally by temper-ature variations between the water and hard landscaping elements, such as the paving and solid walls. These are heated by the sun to a greater degree than the water.

The entry to the house hints at what lies beyond. The design team created a large oculus in the roof of the car porch, directly beneath the pool.

"The sunlight casts a circle on the ground, like a spotlight that defines the entry," says Chee. "It's possible to look up through the water and glimpse the tops of the palm trees and the sky."

Further visual interest is provided by contrasting textural elements. A blade wall of slate crosses the front of the house, intersecting with a white plastered beam.

"We like to use textures to illustrate the different forms of a building," the designer says. "Here the rough-plastered white surface defines the edge of the pool above."

The front door is a simple timber-framed cutout in the slate wall. This exposes a view of the large sculptural spiral staircase leading up to the pavilion.

"Creating a hierarchy in the journey through a house is important," says Chee. "It should be instantly clear where you are expected to go when you enter through the front door. The spiral staircase immediately draws the eye. In contrast, a wall across the back of the entry screens the private areas from view."

The ground floor of the house comprises two long rectangular forms. The wider volume, which is just one room deep, accommodates the entry with dining table, bedrooms and a family living room at the far end. The narrower form houses the service rooms hidden behind the long wall.

The passage between these two volumes incorporates a 40m-long koi pond, with bridges linking the walkway to the individual rooms.

"Because this volume is just one room deep, it's possible to open doors on both sides to get good cross ventilation," says Chee. "Here again, the pond creates cooling breezes. Large air wells in the roof above the pond provide further ventilation. These openings echo the shape of the pools. They also allow rain water to cool the interior. Even in a severe rain storm, the raindrops come straight down, not at an angle, so the doors to the bedroom doors can be left open."

Water run-off from the rain is channelled into a hidden reservoir and used for garden irrigation.

"The pools on both levels enliven the interior spaces," says the designer. "Sunlight reflecting off the water casts reflections on the ceilings, and the wind creates ripples."

Materials used inside the house reinforce the sleek, minimalist architecture. Travertine lines the entry, and the floor in this area is white marble.

"We also used white marble for the floor in the pavilion to enhance this more formal space," says Chee. "In contrast, all the joinery and the ceiling, which extends out to form the sweeping eaves, are in teak. This is a very tropical, Southeast Asian design response."

Balau hardwood was specified for the raft-like platform that extends out above the pool, linking the living areas with the views beyond.

The designer says the house is being cooled exactly as planned. Since the owner moved into the house, she has not often had to use the air conditioning.

"It is not just the breezes that are helping to cool the interior. The water on the upper level also helps to cool the rooms below. Water lost to evaporation is topped up from the hidden reservoir."