The physical barriers separating living, dining and kitchen areas have become less common in the quest for more spacious homes. This has required an entirely new approach to the composition of these very functional areas.

Open-plan living is particularly challenging for kitchens, especially when you consider the sheer number of elements – from large appliances to small cooking tools – this area is required to house.

A popular design option is to treat the kitchen not as a specialised area, but as an additional living space, disguising the appliances and other equipment as pieces of furniture.

In the open-plan living area featured here, architects Todd Ray and John Burke have gone a step further and contained an entire kitchen in a single piece, albeit one that comprises many different elements. Ray describes it as inverting the traditional U-plan of a kitchen to facilitate easy circulation and maximise space efficiency.

"It's a simple composition that is balanced by the tension between the concrete-and-glass cabinet at one end and the large maple cupboard at the other," says Ray. 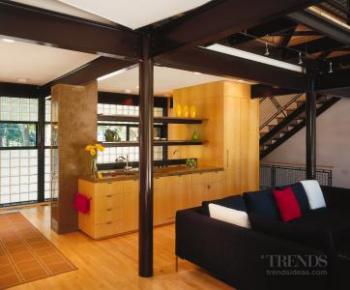 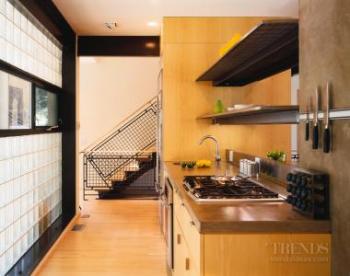 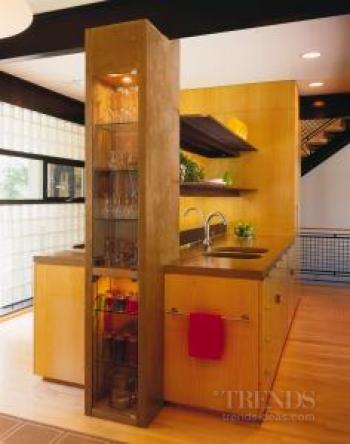 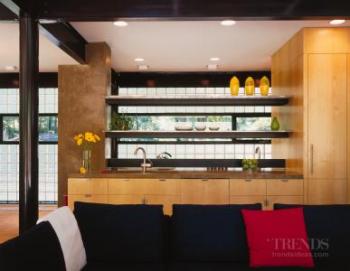 In between these two asymmetrical elements, the polished concrete benchtop is separated by a raised stainless steel splashback. This thin metallic race-way conceals the kitchen's electrical wiring.

"The splashback containing the circuitry is an example of how this kitchen's functional elements are disguised as aesthetic pieces," says Ray.

Above the benchtops, the horizontal shelving is reminiscent of a restaurant's serving area where meals are placed ready for waiting staff to carry them into the dining area.

"The restaurant-inspired layout addresses cooking as a linear process – from storage, to preparation, to cleaning. The line ends at the dining table next to the cast concrete china tower."

Shelving is made from painted steel frames with stainless steel grating, echoing the internal ceiling rafters. They match the long, horizontal window framed by glass bricks on the opposite exterior wall.

Ray says the glass bricks enabled him to take advantage of natural light without compromising the homeowner's privacy.