Many of us have no doubt wondered what it would be like to leave a legacy with the potential to touch the lives of thousands of our fellow citizens. Renowned architects, such as Moshe Safdie, have a rich catalogue from which to choose, but for the rest of us the opportunity may only come once.

In 1994, Muriel Kauffman, a prominent civic leader and philanthropist, began planning for the creation of a performing arts centre in Kansas City, Missouri. Muriel Kauffman passed away a few months later, but since her death, Muriel's daughter, Julia, has worked tirelessly to realise her mother's vision.

The result of the ensuing 16-year journey is the Safdie-designed Kauffman Center for the Performing Arts. Soaring nine storeys above its hilltop site, the Kauffman Center is one of the most technically and architecturally advanced performing arts centres in the United States.

The 26,500m2 facility comprises two stand-alone halls – the 1800-seat Muriel Kauffman Theatre and the 1600-seat Helzberg Hall – both housed within a dramatic overarching shell of stainless steel, concrete and glass.

"I believe that the site of a project always holds the secret for its design concept," says Safdie. "Walking around, I was compelled by the dramatic view to the south. Thus, I placed the two performance spaces to face in this direction, integrated and connected by a single lobby – an expansive glazed porch contained by a glass tent-like structure. 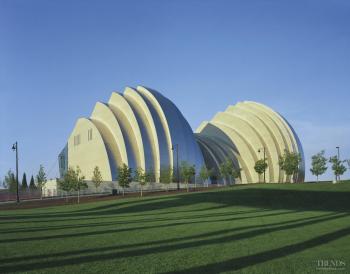 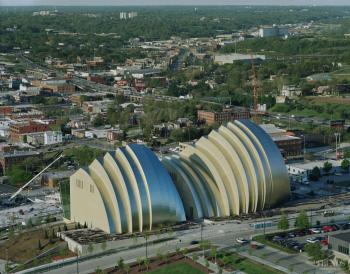 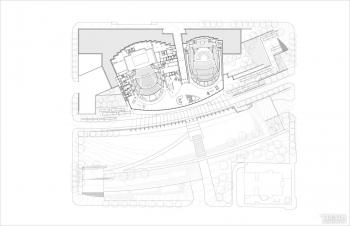 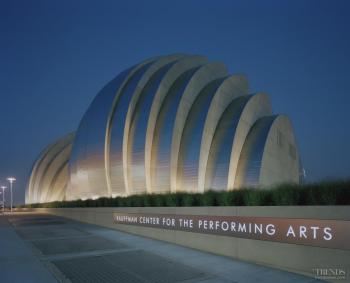 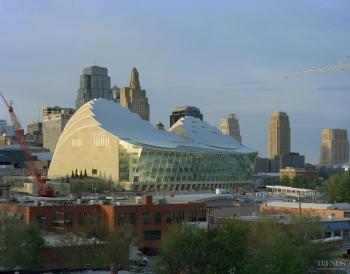 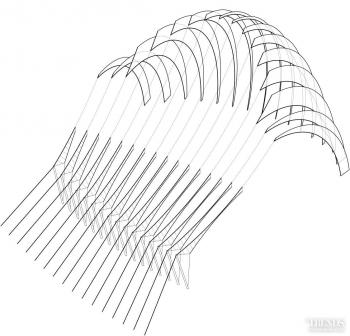 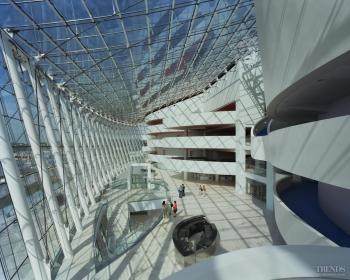 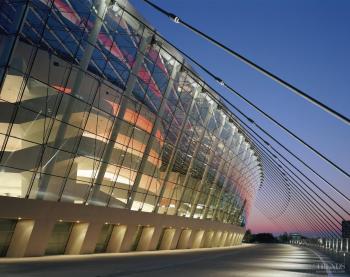 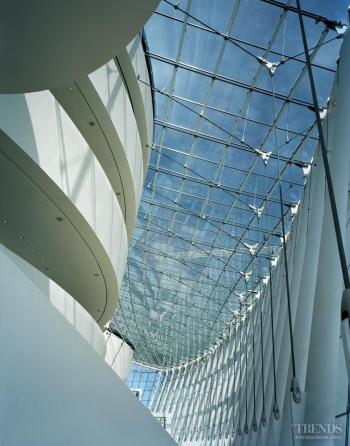 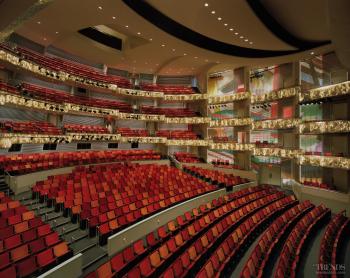 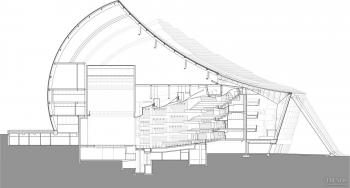 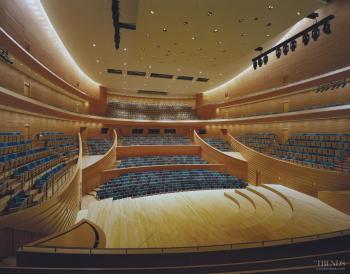 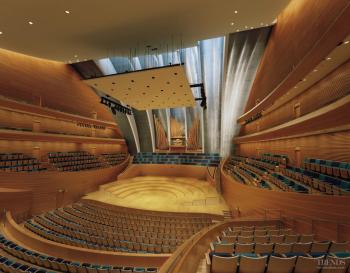 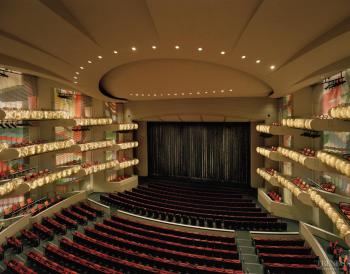 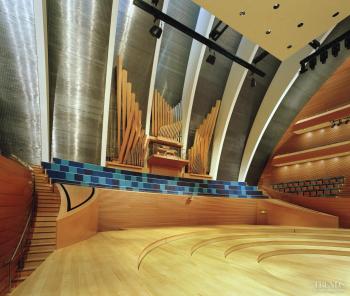 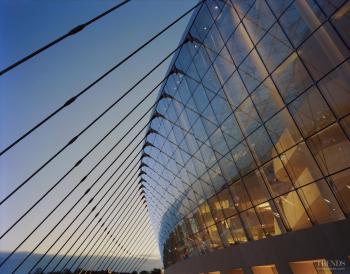 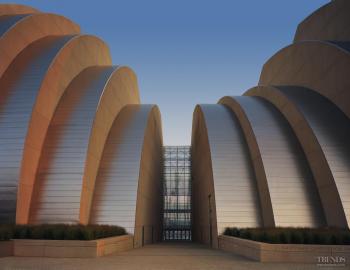 "The drop in the land towards the south allowed us to include a new road that serves as the drop-off point and leads to a large underground parking garage, on top of which sits a park. From the garage and the drop-off levels, the public ascends the grand stair to the lobbies, with public gathering areas and the individual theatres on each side. Recognising the significance of downtown as an additional access point, the north entrance was aligned on the axis of Central Street, penetrating through the building into the theatre lobbies."

Patrons are taken on a journey from truly public spaces, beginning with the city itself, to the close intimacy of a seat within one of the performance halls via the lobby and its sculptural balconies, and in doing so, become a part of the performance as well, says Safdie.

"The halls are served by a series of access balconies fronting on the lobby – Brandmeyer Great Hall – forming two conical stacked rings of white plaster. The thousands of people mingling before and after performances and during intermissions are visible theatrically to one another.

"Thus, the great hall with its surrounding balconies is a counterpoint to the theatres within; the theatre of the public realm, where the public are visible to the southern sweep of the city."

The Kauffman Center's two performance spaces, Muriel Kauffman Theatre and Helzberg Hall, are two distinct structures, each existing in their own acoustic envelope. Safdie collaborated with Richard Pilbrow of Theatre Projects Consultants and Yasuhisa Toyota of Nagata Acoustics America on the design of both halls.

"From the outset, for Helzberg Hall, we wanted intimacy – to allow the public to engage with the musicians as in an embrace," says Safdie.

"Rather than the traditional frontal relationship of stage and audience, we surrounded the music makers with the public. With the 1600 seat count, which makes great intimacy possible, we strove to have each person experience the music without a balcony or ceiling above them. We also wanted the spatial experience within the hall to evoke the exterior design of the building. Thus, the fanning geometry of the northern facade is echoed in the interior. It supports the sculptural arrangement of the organ within it; as it reaches towards the ceiling it branches apart, to create skylights that allow the daylight and sun to penetrate and form reflections on the organ.

"In counterpoint to the warm intimacy of Helzberg Hall, the Muriel Kauffman Theatre is festive and exuberant. A series of murals, conceived and designed by the students of the Kansas City Art Institute, are painted and illuminated directly on the acoustical structures. The overall effect is of a dynamic mural, rich in reds, greens, blues and yellows, fused into the geometry of the room."

The balconies in the theatre contribute to the artistic composition of the room, says Safdie.

"The balcony balustrades are a contemporary reinterpretation of the gilded, glittering, candle-lit balconies of 18th- and 19th-century theatres. The lights reflect through the glass-like enclosure to form an ever-changing chandelier-like surface."

But it is not only what the Kauffman Center offers on the inside that resonates with audiences. Situated on 2ha of park-like grounds, the centre bridges three of Kansas City's most dynamic downtown neighbourhoods – the high-rise urban core of downtown to the north and east; the Crossroads Arts District, to the south; and the Power & Light District, an entertainment precinct to the northeast.

"The Kauffman Center will be a beacon for Kansas City – a transparent and welcoming place that radiates warmth and invites the community to come together," says Safdie. "And as a hub for Kansas City's performing arts, the centre will play a vital role in the social fabric of the region, linking both people and neighbourhoods. This sense of connectivity continues in the halls themselves, which have been designed to create unparalleled intimate experiences for both artists and audiences."