When a home is built to make the most of the rugged mountain scenery and tranquil lake setting, the bathroom should be no exception.

In this house, architect Michael Wyatt used a glass wall to maximise the homeowners' view from the bathroom, while still providing an element of privacy and protection from condensation.

"It was imperative for the homeowner that the scenery was visible from all rooms in the house, but due to the cooler climate of the location, we needed to find a way to contain the humidity. The glass partition does that, while also letting in more natural light into an otherwise dark room."

Like the rest of the house, the bathroom colour palette matches the surrounding landscape, using dark earthy tones. A skylight above the bath boosts the natural light, as well as providing a window to the stars at night, says Wyatt.

Large mirrors that reflect the light cover much of the dark exposed concrete wall, which has been extended from the bedroom beyond the glass wall, reinforcing the idea of the rooms being one. 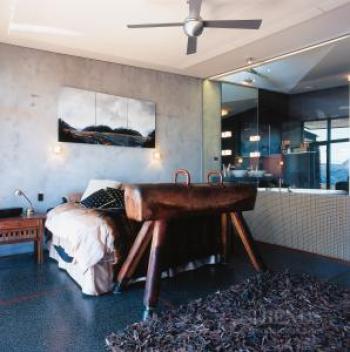 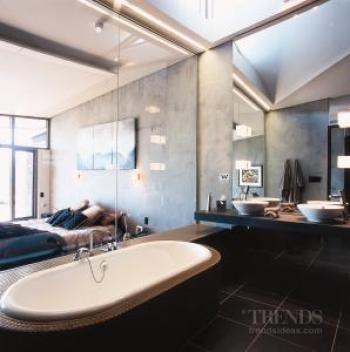 To enhance this spatial continuity, mosaic ceramic tiles are inset in the bath and in the wall below the glass in the master bedroom.

"It is as though the tiles waterfall from the bath into the bedroom, visually integrating the two rooms," says Wyatt.

To better see the panorama, the bathroom is raised up half a metre higher than the bedroom, enabling someone in bath to see over the bed toward the lake, which was created with the home.

The view can also be enjoyed from the shower, which is enclosed by a concrete wall and transparent screen to contain the water spray.

Despite the cool climate, the bathroom remains at a comfortable temperature all year round, thanks to the insulating effect of the concrete and underfloor heating.