This master bathroom, in a new addition to a Victorian house, replicates the original traditional wall casings and marble floors in the home

Traditional houses are often full of character, but they were not always designed to make the most of a great location.

This new master bathroom is in a new addition to a Victorian house on a picturesque inner harbor. Project designer Steve Harrington of Carpenter & MacNeille says the existing master suite was on the other side of the house, facing the street rather than the view.

"By adding an extra story to an earlier addition at the rear, we were able to create a new suite that maximizes the water views."

Harrington says the owners wanted the suite to be in keeping with the era of the house. Consequently, the bathroom replicates the existing millwork, right down to the casings and the cap on the high wainscoting.

"Because the new addition was limited to the size of the existing footprint, the furniture-style cabinetry and custom built-in paneling was used to maximize the space and create a cohesive look." 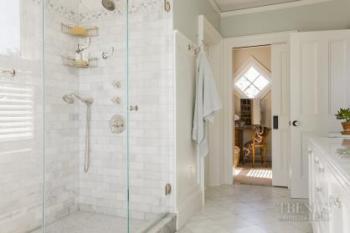 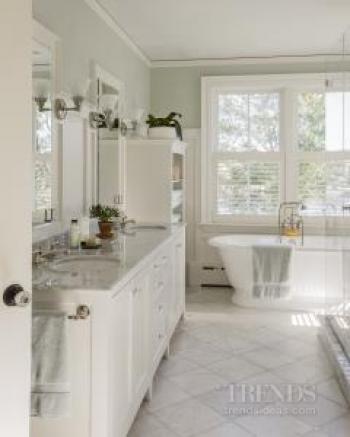 The sense of tradition is reinforced by a Victoria & Albert freestanding tub positioned beneath the window. White painted shutters on the lower part of the window further enhance the look and help to maintain privacy.

Honey Collins, the interior designer on the project, teamed the white vanity with a soft green paint shade on the walls.

"The client wanted a beach feel, since they live on the coast. The green is reminiscent of the ocean. The color is also picked up by the small green tiles inset in the larger Carrara marble tiles on the floor."

Collins also specified Carrara marble for the vanity tops and shower tiles, albeit in a different scale for added visual interest.

"Carrara marble is very versatile – it works in traditional and modern settings."

In this bathroom, the floor tiles are laid on the diagonal, which breaks up the long, narrow axis, helping to make the space seem larger.