Some of the fundamental starting points when designing a new home include the shape and size of the site, a consideration of views or interesting aspects, and the separation of entertaining areas and private rooms.

When architect Ron Sang was asked to design this family house for a relatively small parcel of land on a steeply sloping suburban street, he worked from a completely different point of view.

"The site was elevated and had an unusually generous height limitation of 30ft. So, we decided to maximize its potential by building right up to this point," Sang says. "We planned the house from the top level down, and excavated as required to build a four-level home. Because the master bedroom is on the top level, it gets panoramic views of the city."

From the street, the house looks dramatic, with floor-to-ceiling glazing looking down towards the city. Both the color and the proportions of the front door add to the impact. Painted bright red and 16ft tall – almost two stories – its size is in keeping with the scale of the house. "Any smaller, and the door would look dwarfed," says the architect.

"Externally, a narrow, four-story house could be uninteresting to look at, so to avoid this, we created a penthouse effect on the top level." 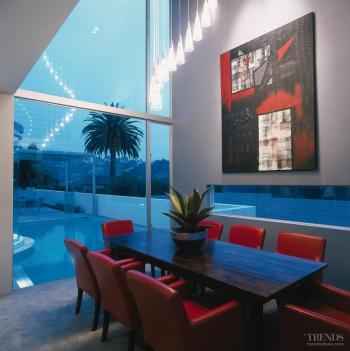 Sang has utilized a strong, arched form to provide a feeling of stability. The penthouse appears to perch on the arch of the main structure. The same arch shape has been repeated above the front door and in various forms throughout the house.

Sang says he and the owner discussed whether to highlight the arches with color, but decided instead to paint the exterior surfaces white to create a more precise and pristine look.

"With such a prominent site, we had to decide whether to minimize the impact of the house, or go to the other extreme and make a strong statement. Because we chose the latter, we opted for a very dramatic lighting configuration that makes the house appear to glow at night," says the homeowner.

Another dramatic feature of theexterior is the use of aluminum louvers. These extend 16.4ft to the edge of the property on the sunny side of the house, providing outdoor areas with shade and protection from the weather. They also reduce glare and control the amount of solar gain.

To integrate the outdoor and indoor living areas, the pool wraps around one side of the house, so it can easily be seen from the living spaces. To emphasize the connection, the outer wall beside the breakfast alcove curves so the table appears to be floating over the pool.

Inside, the house is open plan on each level. To ensure the spaces are practical and functional for family life, separation between formal and informal living is achieved by furniture groupings and by breaking up the space visually.

For example, the formal living and dining areas at the front of the house overlook the street, separated by the kitchen from family living spaces at the rear of the property.

"We have divided the space, so although it is open, different parts havedifferent vistas and you cannot see the whole living level from one vantage point," the architect says.

The kitchen was designed to be the focal point of the family living spaces. Being in the center of the house ensures it is convenient for both outdoor entertaining and more formal occasions.

"Its central position helps the house to work both from the family's point of view and for entertaining," says the owner.

The clean, crisp lines of the exterior continue into the house, with details such as square aluminum doors handles and silver window joinery. Internal walls are painted in neutral tones and two of the side walls are glazed.

To add warmth to the interior spaces, the architect has introduced elements such as dark-stained oak furniture, ceramics displayed in niches in the front entrance and living areas, and splashes of red in furnishings and in specially commissioned paintings.