It's rare to acquire an entire city block for redevelopment, but when it does happen there's an unparalleled opportunity for developers and architects to make a significant contribution to the fabric of a city.

The former Chippendale United Brewery site on the western fringe of the Sydney CBD has been transformed by a masterplanned joint venture between Frasers Property Australia and Sekisui House Australia.

But it wasn't simply a case of throwing out the old for the new. While the developers of the 5.8ha site were looking to raise the benchmark for innovation and sustainability, they were also wanting to preserve key heritage elements and give something back to the city.

"This was an opportunity to reinvigorate an entire precinct in what is essentially a city of small villages. Connectivity was crucial – for so many years the old brewery site had been closed off to the public. We needed to open up the entire space, hence the idea of a park-like development that would provide through links along key axes. The site is close to Central Railway Station and two universities, so pedestrian traffic is high. 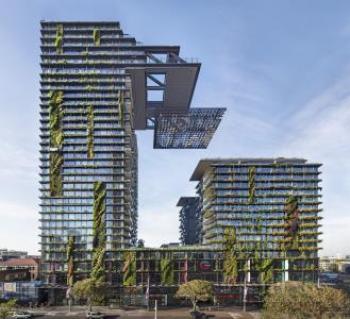 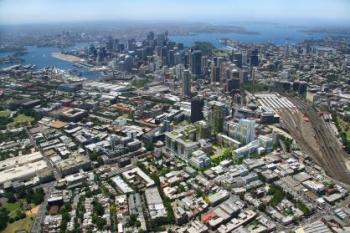 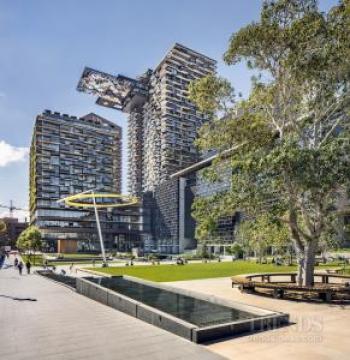 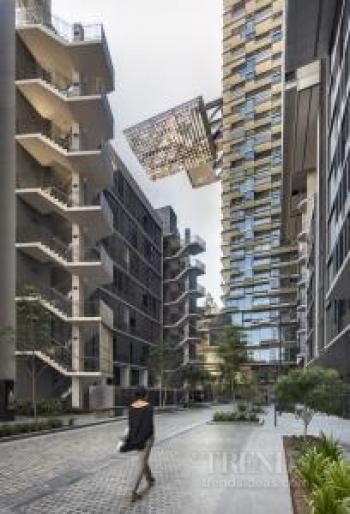 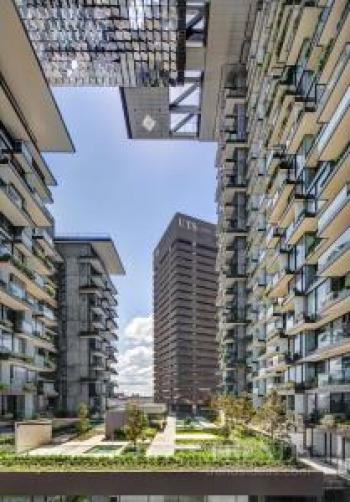 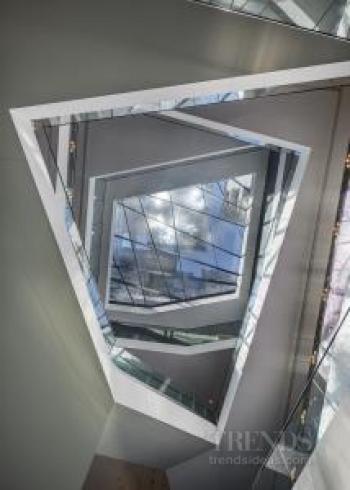 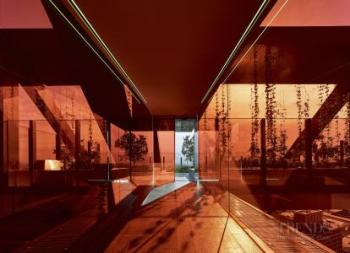 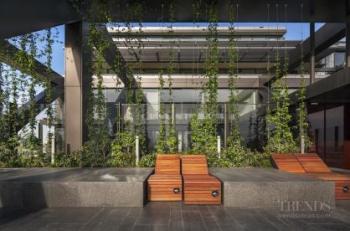 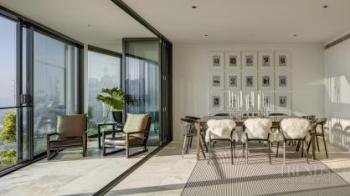 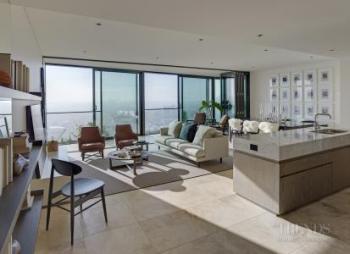 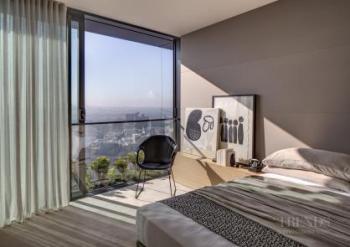 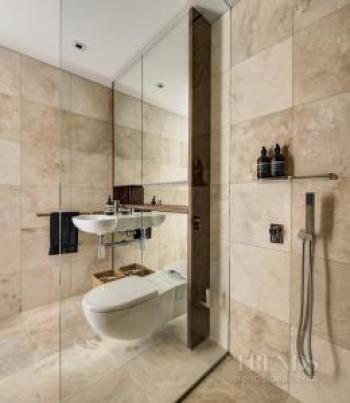 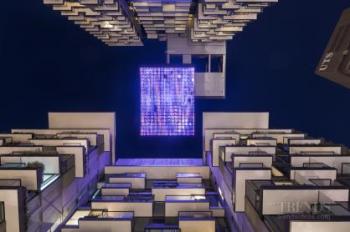 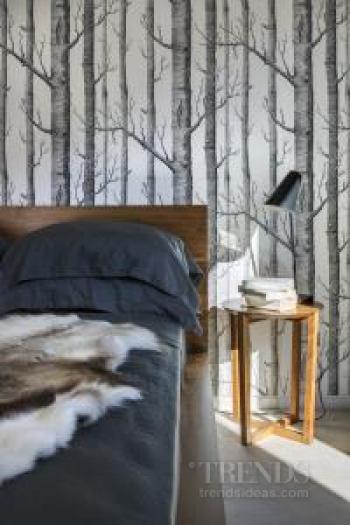 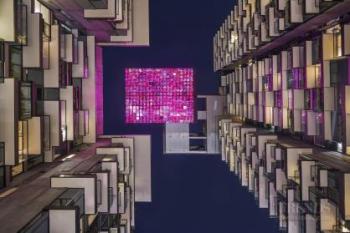 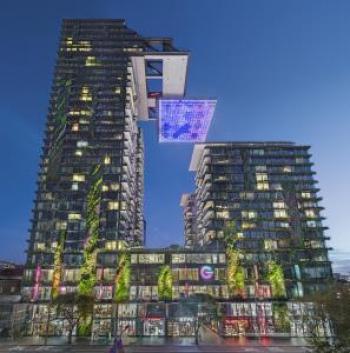 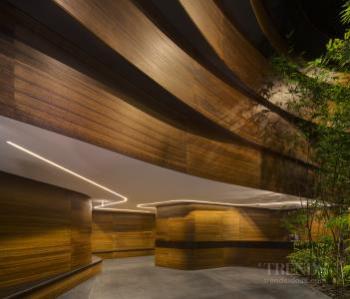 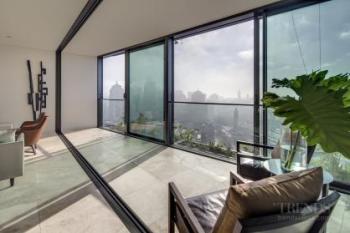 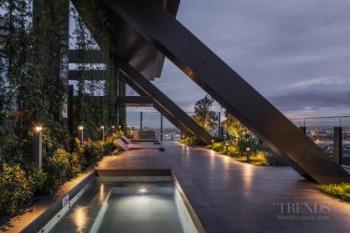 "In designing the tall east tower, we took into account the height of the existing UTS building on the other side of road, where Broadway becomes Parramatta Road, a key arterial route. We chose to match this height so the two towers together create a gateway to the city from the west. There is also a strong urban edge to the development on this side.

"In contrast, the residential nature of the Chippendale area to the south is reflected in an undulating facade treatment to the south of the two towers. There is also a liveliness to this elevation, with the balconies stepping in and out – this creates a softer facade."

The development also boasts a five-level 16,000m2 shopping centre beneath a landscaped podium, a Sky Garden at Level 29, a 6400m2 landscaped public park at ground level – Chippendale Green – plus new public pocket parks. Thirty-three heritage elements have been retained and are being restored for adaptive re-use. These include a prominent tiled archway at Carlton Street, terraces and warehouses, three pubs, the Brewery Yard buildings and brick stack, and the original brewery administration building.

However, it is the East tower's striking form, with its cantilevered platforms, that has transformed the skyline. The platforms have a highly functional role in terms of bringing natural light down into the park, and the retail centre below.

"The smaller west tower has 40 6.2m2 heliostat panels on top, which track the sun during the day," says Giles. "Sunlight falling onto these reflector panels is bounced back up to 320 0.8m2 fixed reflector panels cantilevered off the taller east tower. These panels reflect the light back down, with 40% of the light falling onto a large skylight over the retail centre.

"This skylight has a shallow pool of water over it, so the light shimmers down into the atrium, giving it an ephemeral look. Plants in the atrium thrive on that reflected light. The remaining 60% of the light from the reflector frame is directed down into the southern plaza."

The heliostat is believed to be the first of its kind to be used in a residential context in Australia, and the largest of its type in the world used in an urban environment. By night, the reflector frame becomes a giant LED-illuminated multicoloured artwork, titled Sea Mirror, by artist Yann Kersalé.

The monumental form of the tower is further enhanced by the green walls that feature throughout One Central Park. Designed by French botanist Patrick Blanc, the vertical gardens cover more than 1200m2, across 23 panels.

"Every side of the building has a different microclimate that needed to be taken into account with the plant selection," says Giles. "Plants were also chosen to flower at different times of the year, which is why there are 383 species, both indigenous and imported. These all help to create a discernible tiering of green, like a ribbon that winds up the building. The plants are watered by a gravity-feed system that pumps recycled water up to the top of the building, where it is enriched with nutrients, then drip-fed back down the facade."

The greening of the building continues on the top of the podium, which is a recreational area for residents. This features landscaped gardens, a long swimming pool and a number of Jacuzzis.

The Level 29 Sky Garden on the cantilevered deck is another amenity for residents of the Sky penthouses and sub-penthouses. The garden is accessed through a darkened passage that opens into an area washed with bright orange-red glass.

"This is a transition zone that heightens the sense of anticipation," says Giles. "The natural daylight is a burst of colour at the end of the walkway, where you emerge to find yourself out on the cantilevered platform at the top of the building. This area is also beautifully landscaped, with gardens and a Jacuzzi."

A similar attention to detail can be seen on the interiors. Giles says every apartment, from the smallest studio to the penthouses, has a similar design approach and material palette.

"The design needed to be of a signature quality that is consistent right through the building. Smart, articulate design has always been a priority for the joint venture developers, and this is a key part of the One Central Park experience."

Sustainable initiatives were another key driver of the design. One Central Park, Central retail and Park Lane have all achieved 5 Star Green Star ratings from the Green Building Council of Australia. While the vertical gardens are one of the most visible expressions of the commitment to sustainable urban living, other eco-friendly features are much in evidence. One Central Park houses its own central thermal plant and tri-generation power station, using low-emission gas to produce electricity and thermal power for heating and cooling. Rainwater is harvested, and grey water and black water retained for re-use in laundries, toilets and gardens.

Other initiatives include a 44-vehicle GoGet car share service, and 94% recycling or re-use of materials removed from the site during demolition.

Giles says the developers' commitment to the community is already paying off, in terms of enlivening the precinct. The retail centre, hospitality venues and Chippendale Green are in constant use. And the apartments themselves have been highly sought after since day one.

"The variety of units on sale ensured there was something for everyone, to the extent that Frasers was selling one apartment every minute during the launch," says Giles.

Central Park development director Mick Caddey says the completion of One Central Park is a significant milestone for the joint venture partners.

"This is an outstanding achievement with the visually striking design representing the core values of Central Park in delivering an innovative, environmentally sensitive and sustainable design of high standard."