Tucked within the gabled roof line of a Cape Cod cottage, this master suite is a peaceful sanctuary

Dormer windows and gabled roofs add character to a home. But they can create a design challenge when it comes to planning the interior layout of bedrooms and bathrooms.

The master suite featured on these pages is tucked within the attic space of a large, refurbished Cape Cod cottage. Its position makes it an ideal sanctuary away from the rest of the house, says architect Tom Catalano. However, the shape of the rooms and the position of the eaves made it difficult to create one large, open space. Consequently, the bathroom is long and narrow, with a barrel vault ceiling that helps provide a sense of volume.

"The spaces, which were once the servants' quarters, had a lot of character," says Catalano. "We wanted to enhance this feeling and also create a room that would be a refuge, a place where the owners could escape for a little peace and quiet."

Positioning a large, traditional-style tub at the end of the bathroom, in front of the window, draws the eye and adds to the character of the room. It is also positioned to maximize the sea view – the windows are low enough to provide a view from the tub.

Symmetrical mirrors on the walls adjacent to the tub increase the amount of natural light in the room. Similarly, glass shelving at the end of each vanity unit helps to keep the rest of the bathroom light and adds a sense of transparency, says Catalano. 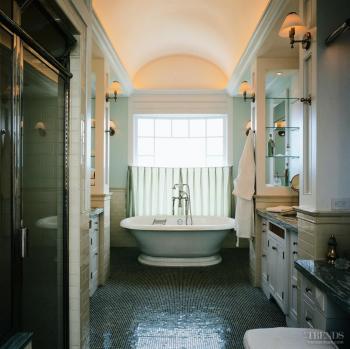 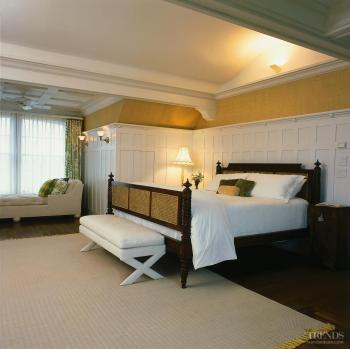 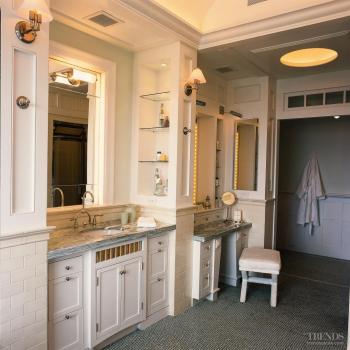 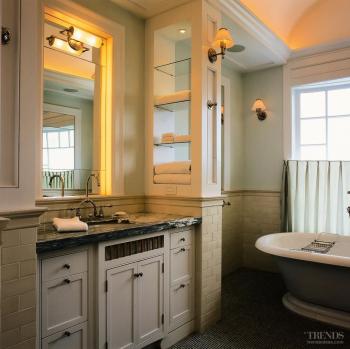 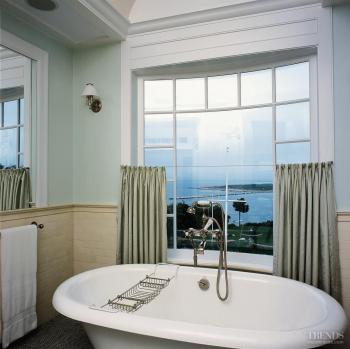 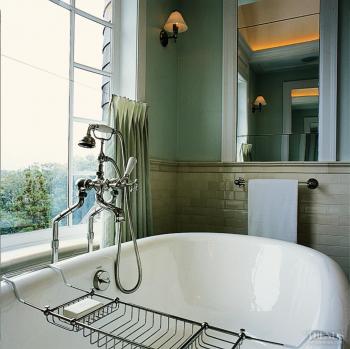 Matching vanities and a dressing table are positioned on either side of the narrow space leading into the room. These feature painted millwork, which reflects the home's 19th century origins.

"The cabinet doors have a customized design, which is in keeping with the less formal character we wanted for this part of the house," says Catalano.

However, a touch of glamour was introduced with marble vanity tops and the faucets and fittings, which add a traditional feel to the room.

Heritage aspects were also considered in the choice of flooring. Marble mosaic ¾-inch tiles are reminiscent of flooring that once featured in bathrooms of classic Cape Cod homesteads. The tiles also reflect light, helping to brighten the interior of the north-facing room.

Lighting plays an important role in creating the right ambiance for a room designed to be a retreat. The barrel-vault ceiling features subtle cove lighting, which highlights its curved form. Wall lamps add a warm, traditional feel, while mirror lamps provide essential light above the vanity units.

Details that create a sense of pampering include make-up lights around the dressing table and a large, luxurious shower. There is also a separate dressing room between the bedroom and bathroom.