While the demand for inner-city housing increases, the availability doesn't always follow suit. Sometimes, the best solution is a little lateral thinking – can a building be altered to fit a modern, urban lifestyle?

The owners of this apartment could see the potential of the run-down space. For starters, its inner-city corner location was perfect. And, with its exposed trusses and factory windows, it was clear the apartment could be converted into a spacious New York-style loft.

Designers Tobin Smith and Case Ornsby of Form Architecture could also see the potential of the space, which was originally a Skellerup warehouse.

"Although this is a heritage building, it had fallen into disrepair," says Smith. "It had been converted into residential apartments 20 years ago and used as student accommodation. Many original features, including the trusses and brickwork, were concealed beneath layers of paint."

Smith says the building's heritage status meant there were restrictions on what could and could not be done. 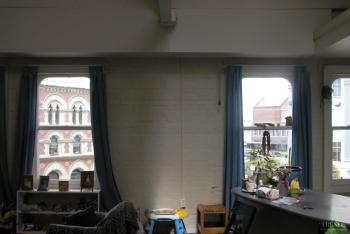 As sandblasting the brickwork would have compromised the old mortar, the walls were hand-scraped to reveal the original bricks. The painted wood trusses were also stripped back to reveal their aged character.

Smith says the entire floor was gutted. The main living space, which had been partitioned to provide an extra room, was opened up to provide a spacious, open-plan kitchen-dining-living area. Crude bulkheads, which had been built to conceal the building services, were also removed.

"Rather than hide these elements, we chose to expose them and paint them black," he says. "We also painted the steel beams and columns black and exposed the original tongue-and-groove sarking on the ceiling. New purlins and insulation were installed behind the sarking."

"We added a lot of uplights to ensure the ceiling would be a key feature," says Ornsby. "These provide reflected, rather than direct light."

The building's character was further enhanced by the restoration of the original factory windows and kauri floorboards.

The history of the former warehouse is also evident in other areas – a large steel beam and pulley were restored and painted black. The original loading bay beside the pulley is now screened by a large pane of glass, which can be covered by a sliding timber-board door.

An additional two skylights were installed in the living area. As the apartment faces east, the extra light helps brighten the interior in the afternoon.

To provide storage and a focal point in the living area, the designers created a large, freestanding wall, which houses a modern gas fireplace and a television behind a pocket door. The joinery wall also conceals a small study area.

The kitchen, at one side of the living space, features cabinetry of a similarly large scale, designed to balance the room's proportions. One side of the large 4.5m-long island is anchored visually by a basalt stone upstand.

"To balance this heavy look, the other end of the island sits on small legs that provide a floating look," says Ornsby. "The island and the flush wall of cabinetry are more like joinery you would find in rooms that are not kitchens. For this reason, many of the appliances are integrated. We also specified a downdraft, rather than a hood, which would have compromised the roof and trusses."

An 1800mm black-painted pivot door behind the kitchen opens to the master bedroom suite.

"This was designed to sit open like a fin rather than a traditional door in a frame," says Smith. "As the apartment interior is such a massive volume, everything is oversized. Small items would have been lost in the space."

The contemporary treatment extends to the master ensuite. Here, the bricks have been repainted in a dark-grey shade, continuing the neutral palette of the rest of the interior, which was chosen to highlight the natural wood, brick and steel elements.

A linear mosaic wall around the shower cubicle and cantilevered basins add a fun, contemporary feel.