Up in the air

Minimal decorative elements were needed for this bathroom, perched on a clifftop and cantilevered over the sea

Up in the air Discover this article's resources 0

Some of the strongest influences on the design of a space come from the elements surrounding it. Rooms with spectacular views are often best furnished simply, while internal spaces need more decorative features to give them character and interest.

A surfeit of views faced Novak and Middleton Architects when the company was asked to design a new home on a cliff overlooking a busy harbor.

Architect Richard Middleton says the steep nature of the site meant that the house appeared to float off the cliff.

"When it came to planning the master suite, we wanted to create a space that would have a real sense of drama," he says. "Rather than push the bathroom into the background, we decided to make it an extension of the bedroom, ensuring both spaces were equally enjoyable to be in."

As a result, both areas have similar views and there is no door between the bedroom and bathroom. An ozone glass panel provides privacy, and filters natural light into the bedroom. 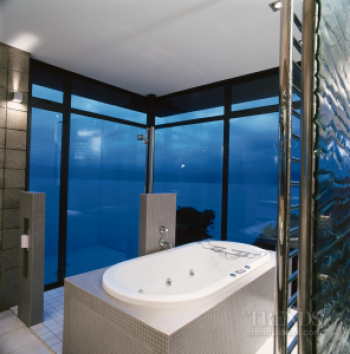 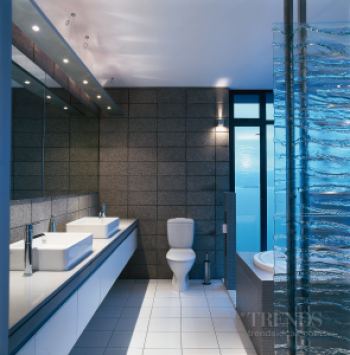 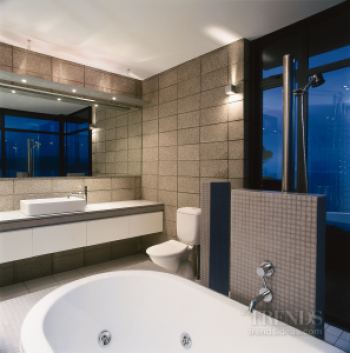 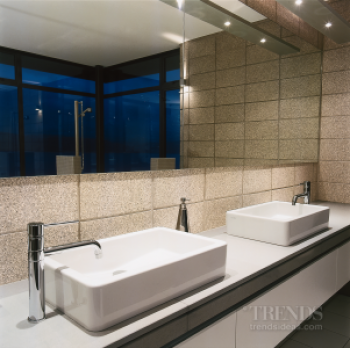 To make the most of the spectacular position, the bathroom had to be simple, with the layout carefully designed to take advantage of the views. The two walls on the seaward side of the space are fully glazed from the floor to the ceiling.

These windows form the sides of the shower, ensuring the bath in the center of the room also has unobstructed views of the sea.

Instead of using walls to contain and conceal the plumbing, a slim vertical rod conceals the pipes and supports the shower head. For the same reason, the faucets for the shower and bath are located on either side of a tiled plinth. A second small, tiled upstand separates the shower from the toilet.

The vanity along the rear wall of the bathroom provides a horizontal element in the space. A large mirror above it brings additional light into this part of the bathroom, reflecting the view back into the bedroom.

Gray concrete blocks behind the vanity and toilet, white floor tiles and a gray Quarella vanity top complete the simple palette of materials. Their neutral tones help to keep the emphasis on the view. A freestanding, floor to-ceiling chrome towel rail compensates for the lack of wall space in the room.

Despite the extensive glazing, privacy is not an issue. Middleton says the height above sea level and the distance from the shipping lanes ensures window treatments are unnecessary.