With tilted roof plates and solid schist walls, this house reflects its magical setting beneath the mountain peaks –

Majestic high-country landscapes are best left untamed – their beauty lies in the rugged grandeur and intimidating scale of their mountain peaks and valleys.

To live in such an environment is to take a back seat to nature, which was precisely the approach taken by architect Michael Wyatt when he was commissioned to design this country retreat.

"The house needed to nestle into the land, rather than sit awkwardly on top of it. Sensitivity to the surroundings was essential for the design, the choice of materials and the siting of the house within the 40ha block."

The owners' desire for an artificial lake also helped determine the site.

"We chose a location that would virtually hide the house from view," says Wyatt. "And with the existing land forms, we could see there wasn't going to be a need for a vast amount of earthworks to create a dam." 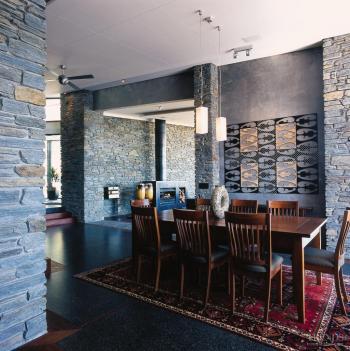 In keeping with the need to link the house to the landscape, the main building materials were limited to stone, wood, and raw concrete.

"These materials are in tune with the surroundings. Even though concrete is man-made, in a philosophical sense it is very similar to rock."

The design of the long, low-lying house also takes its cue from the landscape, with the shape of the roof echoing the lie of the land.

"There is a sense that the roof flows downhill, like the rocky outcrops," says Wyatt. "We also kept the roof edges as slim as possible, so the overall impression is one of lightness, while deep eaves shade and further camouflage the structure."

From a distance, the roof appears to hover above the glass walls, while solid schist dividing walls help to visually anchor the house to the landscape. A long wooden jetty extending into the lake further connects the house with its surroundings.

The use of similar materials, inside as well as out, helps cement this link. Polished concrete floors, which are tinted grey and include dark chips, feature on the terraces as well as inside.

The edge of the formal living room is defined by an inset of schist in the floor, which appears as a continuation of a solid schist wall.

"The schist that appears to divide the rooms on the exterior, becomes a solid mass behind the fireplaces," says Wyatt. "Schist walls also feature on the other side of the house, ensuring the house isn't simply perceived as a glass box."