It may have its design origins in the traditional corner pub, but this home provides for a very contemporary lifestyle

Under the influence Discover this article's resources 0

Proximity to the city is just one reason why some inner-city suburbs are currently undergoing a building renaissance. Many people also appreciate the lifestyle and sense of community. Another more aesthetic reason is the character that comes with the mix of traditional Victorian terrace houses, old store fronts and the streets with a pub on every corner.

This architectural mix influenced the design of the home featured on these pages. Architect Craig Rossetti says the house, at the rear of a Victorian terrace house, evolved from a brick wall that wrapped around the corner of the site. Although the space was tight, there was an opportunity to maximize the land by building additional accommodation.

"There are many heritage buildings in the area and the house needed to fit in with these," says Rossetti. "At the same time, it was important that the design wasn't a slave to reproduction Victorian architecture."

Rossetti says there is a roundabout on the busy street corner, and several old pubs with Victorian corner pediments. These buildings also feature solid concrete façades and a series of regularly placed windows. There are also retro-style ‘60s commercial buildings with free-form bases and crazy-paving on the walls.

"The owners of the house wanted a modern interpretation of the buildings in the area. While there is a cacophony of different styles in the street, we wanted to pick up the essential elements. For example, we have opted for a solid base to the house and reinterpreted the Victorian pediment as the corner feature of the building. 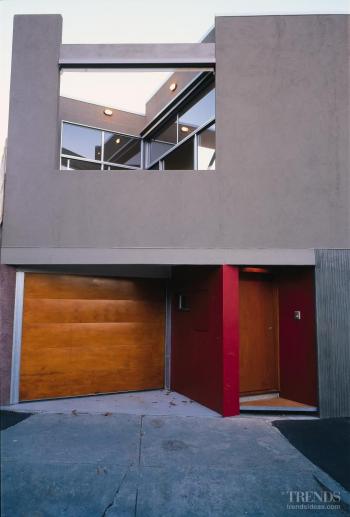 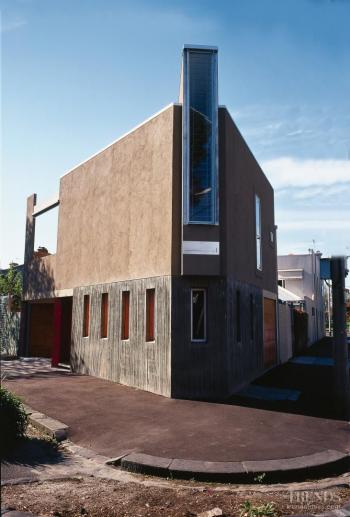 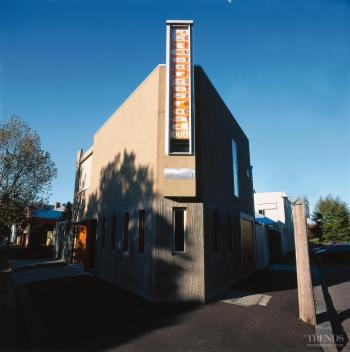 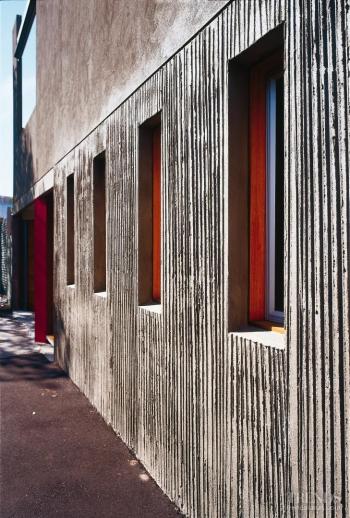 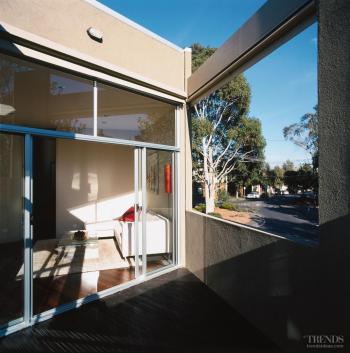 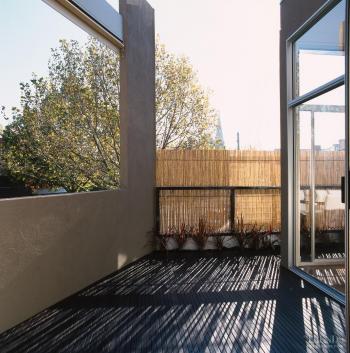 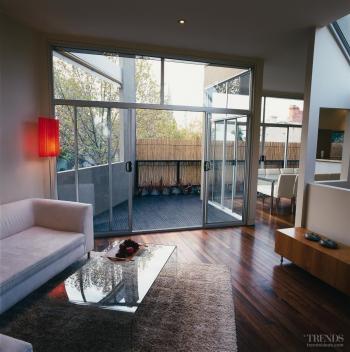 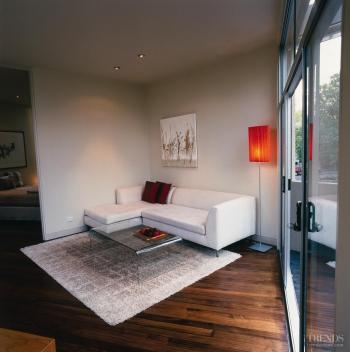 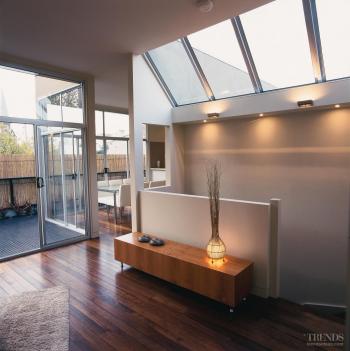 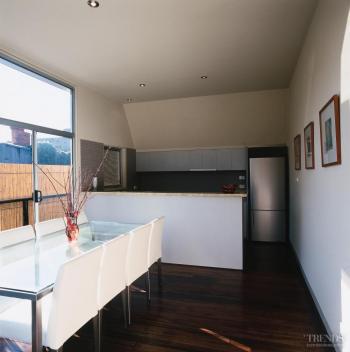 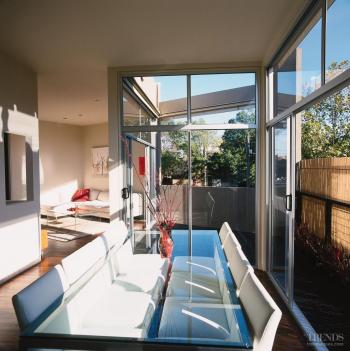 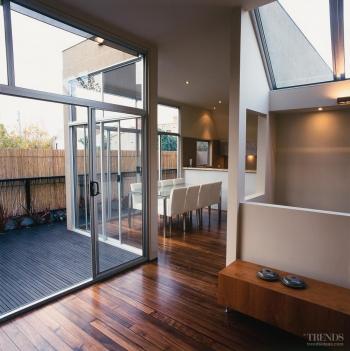 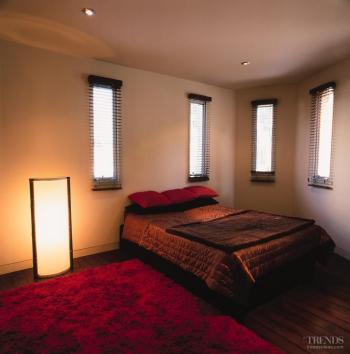 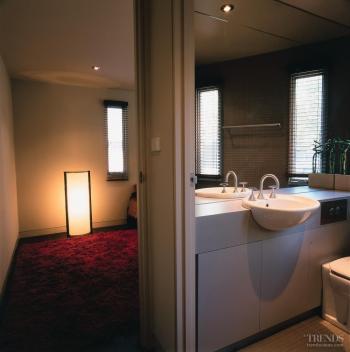 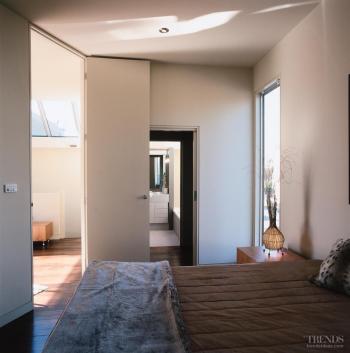 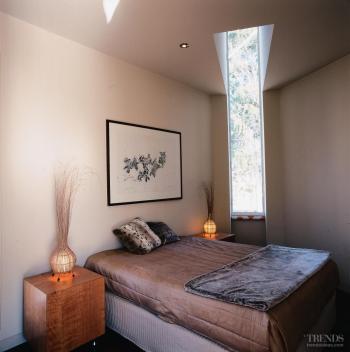 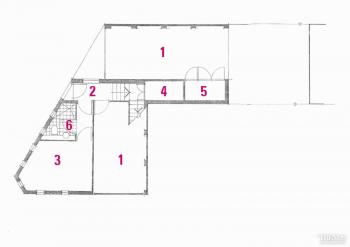 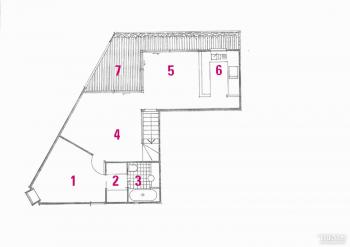 "This corner helps to bookend the street and provides a degree of uniformity that was previously missing."

Like the old pubs, the house is built from concrete and features a series of narrow windows along its base. The brickwork at the base – formerly the boundary wall – was rendered, scored with random vertical lines, sandblasted and painted with anti-graffiti paint. This created a weathered look, and helps to integrate the building with the surrounding environment.

Bright red paint highlights the entrance to the house and also provides a colourful trim to the windows. A freestanding red wall extends into the house, with the red colour continuing up the stairwell to the main living area on the first floor.

While the house appears to turn its back on the street corner, on the other side it opens right up to the light and views.

"Introducing skewed walls and ceilings to the top floor was a way to gain ceiling height where it mattered – in the main living areas. As you move up the stairs from the entrance, the walls and ceilings make the interior appear to explode outwards to the light," says Rossetti. "At night, up-lights help to emphasise the height of the ceiling and enhance the spacious look."

Glazed panels in the ceiling also bring plenty of natural light into the house. Further light is provided by cut-outs in the walls, which are lined up to create a visual flow through the house. They also repeat a theme from the exterior where a large cut-out in a wall frames a view of the street.

A smaller 200mm-square window in the shower of the master ensuite gives the appearance of a cut-out and is positioned to frame a view of the city lights.

Additional light in the master bedroom comes from the tall, louvred window that forms the pediment-style corner feature of the building. A customised pull-up blind is printed with street names, a further acknowledgment of the building's prominent corner position.