Tuscan with a twist by architectural and interior designer Luis Ortega,

This remodel by Luis Ortega evokes an old Italian villa

Tuscan with a twist by architectural and interior designer Luis Ortega, Discover this article's resources 0

Create the look of a rustic Italian hillside, said the owner. Only if I can use materials and forms true to the original, replied the designer. Authenticity – and an accent on open-air spaces – delivers the desired Italian-style villa, and means it will be a joy to live in for decades.

When architectural and interior designer Luis Ortega, in collaboration with Jose Fernandez, came to this project the owner requested a rustic Italian idyll – and capitulated when Ortega wanted to build the house with limestone walls, aged clay roof tiles and wood beam ceilings. In addition, the owner wanted the new ‘old' home to appear to have been remodelled in a contemporary language, says Ortega.

"Most of the old house was swept away before work began, with only the foundations remaining. However, one existing feature that the owner wanted replicated was an open three-vehicle carport at the front of the residence. To assimilate this essentially modern feature into a 100-year-old house style was problematic.

"We hit on the idea of introducing a Corten steel support beam that would develop a patina in keeping with the rustic architecture and also provide the touch of modernity requested. This accent was then used to punctuate the exterior."

In many ways the design centres on the private rear area that encompasses the classic loggia, modern pool house, deck and pool. 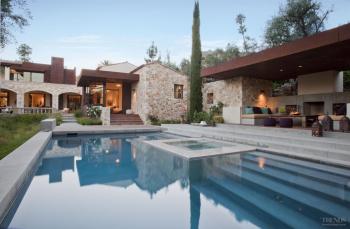 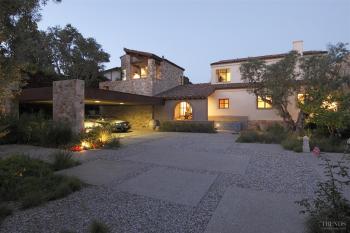 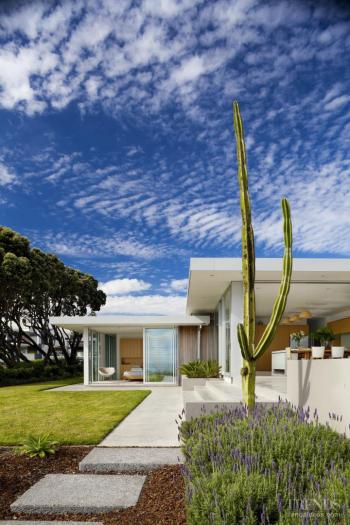 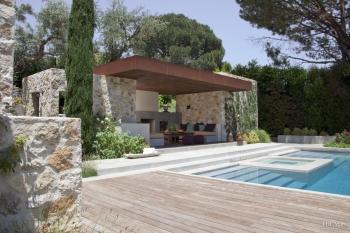 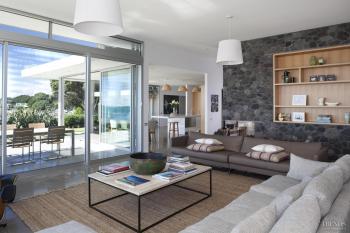 "The owner wanted a relaxed outdoor living area where he could virtually roll off his bed into the pool – hence its proximity to the master bedroom at the rear of the house," says Ortega.

Like the Corten steel elements, the pool is a modern inclusion, but was built in the same limestone as the house – blending old and new.

The pool house design was an offshoot of the carport at the front of the house. Ortega wanted to repeat its form, but as a stand-alone sculptural architectural statement.

The cabana comprises two structures – the form to the right is for pool equipment, while the block at left has an opening in the stone wall that connects visually to the pool. Behind is a stone benchtop, a farmhouse sink, a refrigerator and storage for bar and kitchen utensils. A changing area with toilet room completes this user-friendly, multifunctional space.