Good design doesn't date – it endures and is just as relevant fifty years on. That could well be the motto for this 1960s house, which was designed by award-winning architectural firm Newman Smith Associates.

The new owners of the house say they could see the potential of the property right from the moment they first set eyes on it.

"We had virtually given up hope of finding a suitable property when we stumbled on this modest house sitting on a large, private, north-facing plot. The house was very tired and in desperate need of modernisation, but it had great structure and good bones. It was one of those houses that you know immediately is something special."

The existing L-shaped house incorporated an internal garden beyond a glass-walled entry. It also featured extensive rimu shiplap panelling with negative detailing where the panels met the ceiling. Much of the rimu had been painted, however, and other interesting detailing had not been maximised.

Over the years, the house had been altered substantially. Additions included an inside pool on a lower level, but there was no internal access. 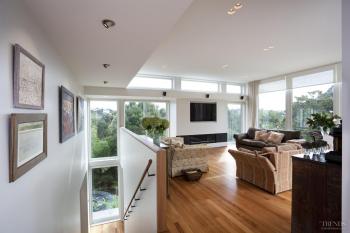 The living room was also very small, with no windows to open up views to the west.

"We wanted to make the house better suited to modern living," says one of the owners. "And we wanted to enlarge it with two more bedrooms, a study and bathrooms. However, it was not immediately obvious how best to achieve this. To knock down the house would have been architectural vandalism, and to build on top of the house would have meant losing the vaulted roof windows that allow light to flood the living space and master suite."

The solution involved removing the internal pool, which the owners felt was a waste of space. This decision was reinforced by the fact that the living room above had developed a lean down the slope and needed to be rebuilt.

In the first phase of the renovation, the existing cement render, blue-painted cedar boards, white-painted rough-sawn cedar planks and maroon window frames were replaced with western red cedar shiplap and white wood joinery. The owners also extended a horizontal band of cedar boards that runs along the top edge of the cladding – the band continues inside the entry where the restored natural rimu panelling matches the colour of the cedar on the exterior.

"It's a seamless transition that mirrors the original 1960s design, which had the cedar trim wrapping right around the roofline and coming through into the entry hall," says the owner.

Limiting the palette to three key materials and colours – natural cedar wood, Ironsand roofing and cream-toned travertine – has also helped to calm the house visually and enhance the connection between inside and out.

A long corridor leading from the front door to the living areas was shortened, creating a more welcoming entry and a more spacious kitchen-dining area. The original long window in the kitchen that looked back at the internal garden was widened, and the garden cleared to provide a more structured landscape. New full-height bifolding doors were also added to the kitchen where it flows to a large, sunny terrace.

The kitchen itself was replaced and moved to a more central position in the open-plan living area. Designer Morgan Cronin introduced a 5m-long island, with a white Corian top.

"We had considered a stone island bench, but the simplicty of form, and practicality of a plain white Corian surface fitted more easily into a '60s house," says the owner. "We used marble for the splashback – the veining adds visual interest and matches the overall palette."

Retaining a row of high clerestory windows was essential, so the overhead cabinetry was designed to sit beneath this. Two ovens appear suspended below these cabinets, enclosed within a steel housing.

Negative detailing is a key feature of the kitchen – a look that is carried right through the house, just as it was in the original design.

A new, larger living room was built, with full-height windows maximising the views and sun to the north and west. The space that had been occupied by the pool below is now given over to two new bedrooms, bathrooms, a laundry and storage room. The bedroom wing, to the right of the entry, was also remodelled extensively. Bathrooms were replaced, and now incorporate cantilevered vanities and sunken bathtubs. On the lower level, there is a remodelled pool room with a bathroom. A travertine walkway leads through the room and out to the marble pool decks. The stone floors and walls give an impression that the space has been carved out of a stone quarry.