Reflective stainless steel panels ensure this new botanic gardens visitor centre is almost invisible, which was precisely the brief given to the architect

Architects are frequently asked to design buildings that will stand out, but that's not the only way to make a strong architectural statement. The project featured on these pages was designed to be near invisible, but it also achieves the seemingly contradictory aim of presenting a challenging new architecture for the tropics.

The design of the new Cairns Botanic Gardens Visitor Centre was put out to tender by the Cairns Regional Council, and the contract was won by architect Charles Wright. The architect says the council wanted an iconic new gateway to the gardens and Tanks Arts Centre.

"We set out to design a green building that would represent a paradigm shift for Cairns," Wright says. "We were interested in moving away from conventional building vernaculars, toward a new and progressive solution that could be applied anywhere on a tropical latitude. And the council was looking for fresh and challenging ideas – there was a collective desire to attract both national and international attention."

Wright says the council wanted the building to be long and low and it needed to blend seamlessly with the surrounding environment, so as to be essentially invisible. The brief consequently demanded a fair amount of lateral thinking.

"We presented several ideas and the council chose the reflective option, whereby the building is clad in highly polished stainless steel panels. The building literally reflects the gardens and rainforest, creating a camouflage – the visual effect is similar to the suit worn by the alien hunter in the original Predator film." 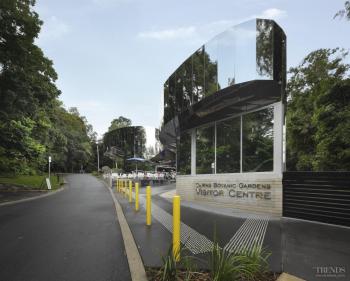 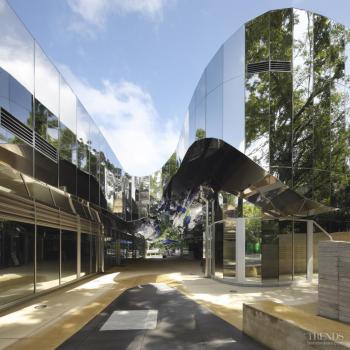 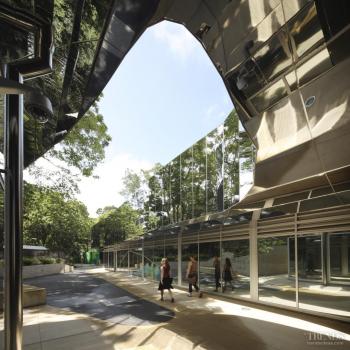 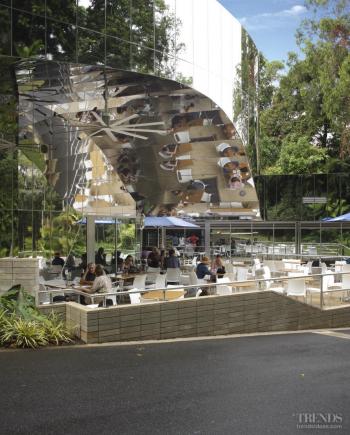 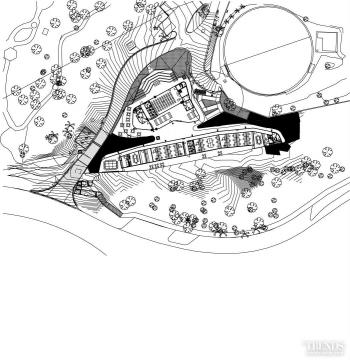 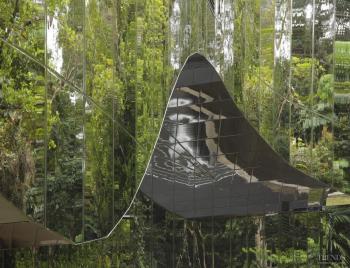 Wright says his company needed to engineer a suitable facade system that would withstand the weather extremes of the tropical climate, which can be highly corrosive on materials.

"Every facet was individually engineered by our team," he says. "The mirror-polished stainless steel panels, which have an anti-corrosion coating, needed to be as thin as possible to minimise the weight of the cladding. They are backed by aluminium panels of the same thickness. This has produced the precise effect we were looking for."

The architect says the organic form of the new building was designed to complement the location.

"We wanted to get away from typical tropical architecture, which often features sandwiched planes, skewed roofs and a lot of downpipe detailing. Not every building needs to be so geometrical – we wanted a more fluid form that would echo the natural environment."

Wright says the site was constrained by the existing paths, roads, easements, inground infrastructure, mature trees and a gradient that compromised access. The team consequently designed the building to straddle and activate the pedestrian promenade that links the gardens with the arts centre.

"This created an open and flexible conduit to the interpretive and performance spaces. It also provided a way for the public to engage with the building – visitors can have a lot of fun with the reflections as they pass through the building."

The team utilised the natural gradient to create an outdoor amphitheatre beside the building, with tiered bench seats at one side negating the need for a retaining wall. This area can be used for small concerts and exhibitions in association with programmes at the Tanks Arts Centre.

"Contrasting paving colours articulate the form of the building, playing with the idea of light and shadow," says Wright. "The paving design is the reverse of the shadow created by the building at certain times of the day."

The northern block contains a café terrace and opens to the major interpretative display and information space. The southern block is an office building for council staff, with a naturally ventilated corridor serving a sequence of cellular office spaces that open out to a shared staff terrace on the south.

"This thin-plan configuration encourages passive cross ventilation, which is augmented by ceiling fans," says the architect. "Individual air conditioning control, combined with an insulated internal thermal mass, helps to minimise energy use through a mixed-mode operation."

"The building is close to carbon neutral," says Wright. "And although the budget did not extend to applying for a certified green rating, the building is equipped with all the sustainable features that such a rating would require."