A company's public profile can be somewhat unexpected. Consider a Danish conglomerate that is over 100 years old. While you might anticipate rather staid interiors, in the new Australian head office of Maersk Line – one of the world's largest shipping and container operators and suppliers – nothing could be further from the truth.

"They wanted a complete departure from what they had previously. In response, we created a dynamic new setting that would facilitate interaction, reflect the company's personality and showcase the company's business in a bold manner."

The front entry space to the large office is the first clue to this approach. Behind the reception counter, the wall calls to mind the ribbed facade of a shipping container, painted in the rich blue of the Maersk Line brand. Cutouts in the metal reveal backlit shelves displaying models of some of the firm's container ships. Maersk Line has links to Danish toy company Lego, and a ship made from Lego blocks is included amongst the miniature fleet.

"Beyond the reception desk, a door to the boardroom looks as if it has come off a shipping container. This is actually one of two photographs of a Maersk container door, treated and vinyl-wrapped to resemble the real thing," says Morelli. 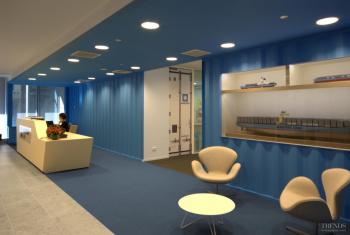 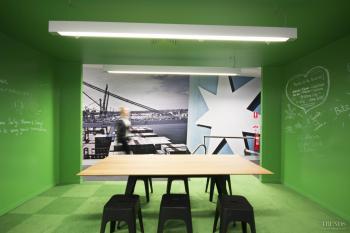 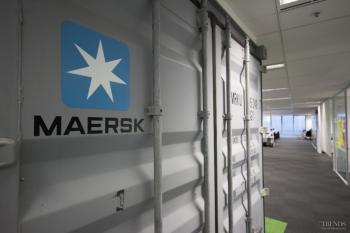 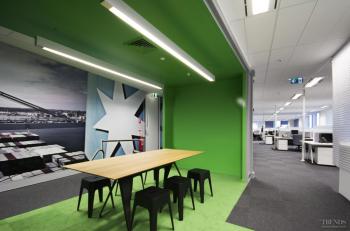 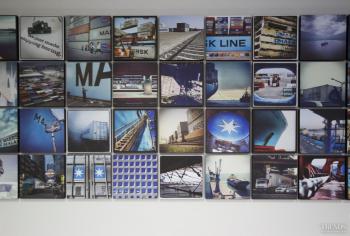 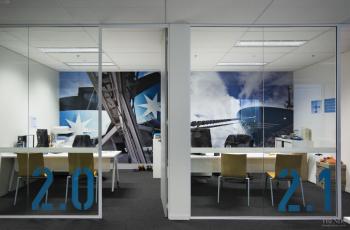 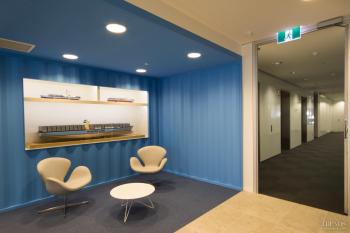 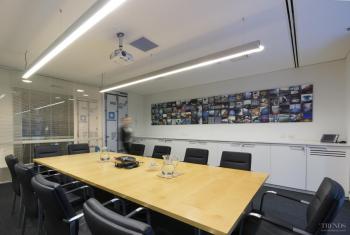 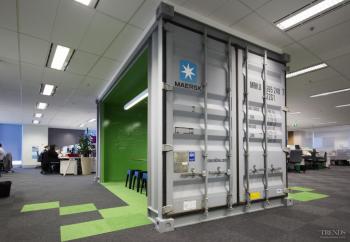 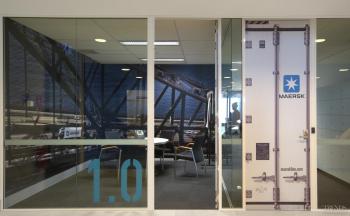 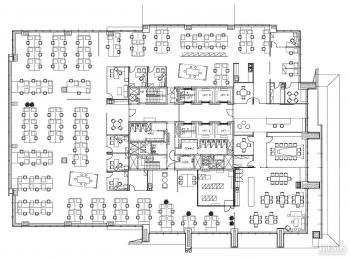 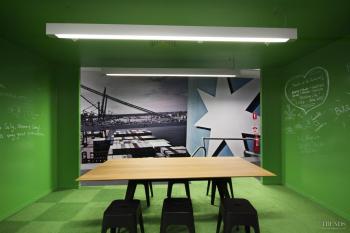 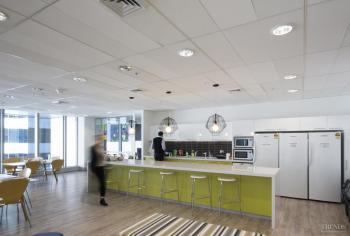 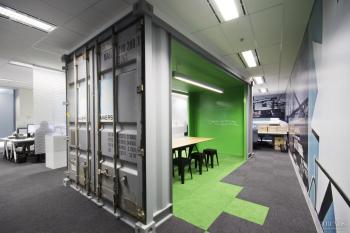 Taking the concept a step further, perhaps the most dramatic inclusions by Siren Design are two authentic shipping containers, deconstructed for the journey by lift up to the eighth-floor space. Open on two sides, the containers have writable surfaces on the interior.

"These are casual meeting spaces, which were designed to allow for collaboration away from individual desks," says Cong. "They're intended to appear as inserted objects within an office that was built around them. We opted for green in the workspace to delineate the heavily branded front-of-house from the back-of-house areas. It also helps to create a fresh and welcoming work environment."

Over the years the shipping giant has amassed an extensive library of shipping and freight images, and the designers made good use of this resource.

"We selected images that show Maersk Line ships and staff, and the firm's presence in Australia," says Morelli. "These include an image of one of the trucks on the iconic harbour bridge. The images were enlarged and set on adhesive vinyl to form colourful backdrops to many offices.

"You know the concept works when the general manager doesn't want wall cabinetry in his office, as it would obstruct part of his ship mural."

With a large, internationally successful company that has such a strong brand identity, perhaps it is not so surprising that Maersk Line has a significant presence in social media, with over half a million followers on Facebook.

"In response, we introduced an Instagram wall in the boardroom. Pictures snapped from all over the world and posted on Maersk social media streams have been fixed onto the magnetic wall and can be changed any time," Cong says.

"The open format and low desking units allow staff from the two original offices to come together here in a spirit of fun and easy communication."