In need of increased office space and a contemporary outlook, a company has two choices – relocate or update. A fresh start might indicate an opportunity to create a bold new statement. However, with architectural insight and an experienced fit-out company, an existing space can achieve a caterpillar-to-butterfly transformation.

"After in-depth feasibility studies, it was decided to transform their existing warehouse and office space into an open plan office complex," says Gracie. "Creating a dynamic new look for the premises was addressed on several fronts. Ivan Ravlich, of RDT Pacific, project managed the fitout for the client, with Amstar Interiors carrying out the work and managing the large number of subcontractors involved."

As part of a hi-tech global industry, the client wanted an up-to-the-moment look that reflected its business – inside and out.

With Navman's navigation systems playing an important maritime role, it was suitable for the new entry to the building to reflect a nautical theme. 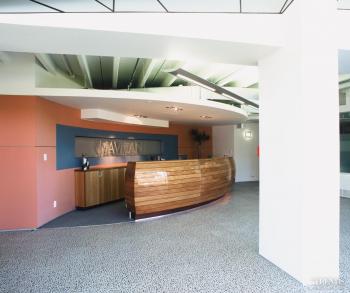 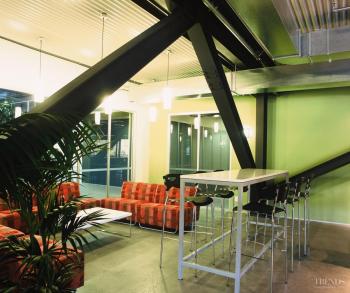 "To this end, we introduced an elliptical overhang in modern materials of glass and alucobond panels," he says. "Reminiscent of a ship's sail and rigging, the feature appears to float over the entrance."

Inside, the reception desk is built in wide-strip kauri and jarrah planks with corking, much like a ship's hull.

"Amstar had to deal with a diverse range of disciplines for this job," says Gracie. "They installed the external canopy and were mindful of the reception desk's nautical flavour when outfitting the rest of the reception. Overhead, exposed concrete beams provide a hint of the treatment of the building's deeper interior."

The building's original interior had been largely demolished and the refit started anew. In structural terms, a mezzanine floor had been introduced through the rear double-height warehouse. These two levels were then married to three levels of office space at the front of the building.

"While much of the interior was stripped, we decided to accentuate the original industrial look of the warehouse at the rear," says Gracie. "Amstar was asked to retain exposed steel beams and some precast concrete panelling, and also polish existing areas of concrete floor."

Clear-treated plywood panels were introduced on walls to extend the industrial look, and ducting, cabling and other services were left exposed. This created an open feel, avoiding the tired look of suspended ceilings, says the architect. However, tricky configurations were required in terms of leaving so much exposed and at the same time making it all pleasing to the eye.

"With such a complex undertaking, a lot of decisions were made on site," says Gracie. "Amstar's team were able to think on their feet, creating minute by minute solutions that saved the client money and helped us keep the whole project within a very tight time frame."

"What was on paper was constantly being reviewed and as needs changed Amstar stayed in step," says Edkins. "With a plethora of subcontractors on site, Amstar kept everything on track, liaising with our project manager, RDT, at every stage."

As with any company refit, impressions are drawn from a number of quarters.

"Clients, visitors, and staff have all had a positive reaction – the new space offers more room, increased flexibility and better staff connectivity," she says. "The entrance has also drawn very positive feedback."