Tranquillity base Discover this article's resources 0

The shift to open-plan living may be conducive to a more free-flowing lifestyle, but it has put paid to any notion of personal space. Perhaps that is why we are seeing an increase in master suites that offer a feeling of sanctuary.

For the owners of this suite, the desire for a soothing, totally private haven was the impetus for an extensive remodelling project, says designer Jennie Dunlop FDINZ, principal of Dunlop Design.

"The clients approached me with a view to creating a luscious master suite that would also address a number of deficiencies in the existing design layout.

"Foremost was the proviso that there be a large bath to luxuriate in, as well as a dressing room – as access to the existing wardrobe was constrained somewhat by the sloping roof of the attic."

Dunlop stripped back the space, knocking down walls to turn two bedrooms and a bathroom into a single master suite. The shower and toilet are in their original positions, as is the master bedroom – although the designer borrowed half a metre from the room to allow for a more generous bathroom and dressing area. 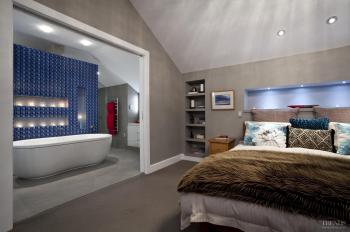 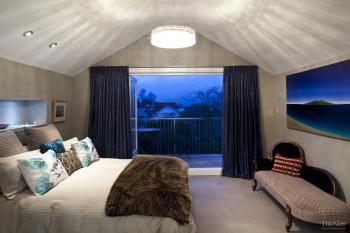 "My main priority for the design was to create expansive, functional spaces, with an overall atmosphere of comfort and relaxation," says Dunlop.

"As the house is close to the sea, I chose a palette that combined marine tones with the warmer hues found in other rooms of the home, with touches of red as accents."

Glass mosaics in shades of blue and green form a custom feature wall, built to the exact millimetre so that none of the tiles had to be cut to fit.

"The wall was the most time-consuming element of the project, in terms of achieving the exact proportions, as well as the final arrangement of the tiles. However, the seamless result makes the painstaking effort worthwhile."

Another of the designer's successes was in repurposing an existing void in the wall cavity to include a cantilevered cabinet. This meant separate vanities replaced the existing – and cramped – double vanity.

"It took a little finessing to bring all the elements together, but in the end we achieved the clients' wish for a veritable spa temple," says Dunlop.