With many homeowners wanting their new bathroom to be a haven of peace and quiet, a spa-like aesthetic is often high on the design agenda. The emphasis is increasingly on texture over color, for a more soothing effect.

Such was the case with this serene bathroom by Diane Taitt, managing principal of De Space Designs. With the existing bathroom stripped out and extra space gained from a linen closet, the designer showed the owners some image boards to give them a feel for the new design.

"They had initially wanted a Caribbean connection, and strong, bold colors. Instead, I suggested we use a more restful palette, adding interest through texture, surface finishes and by manipulating wall planes for a 3-D effect.

"They went with this concept and a simple, understated palette, informed by geometric forms, texture, and surface finish."

To this end, the designer introduced several interlocking planes and niches that form an abstract, textural composition. Some elements are practical, such as the ledge on the side of the tub that conceals plumbing and acts as a seat. 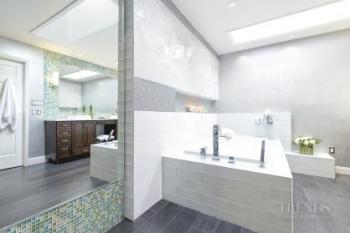 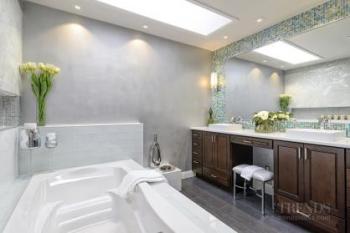 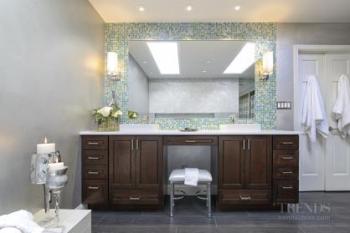 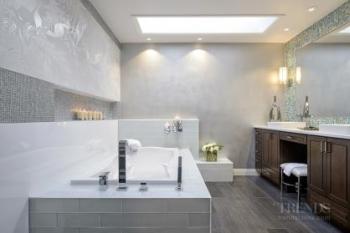 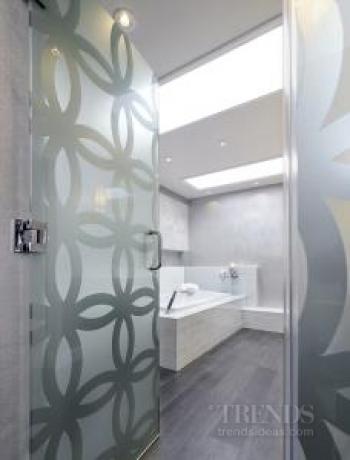 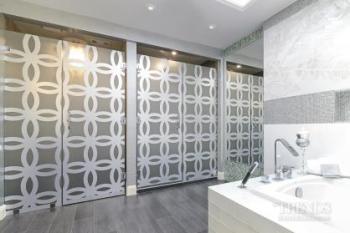 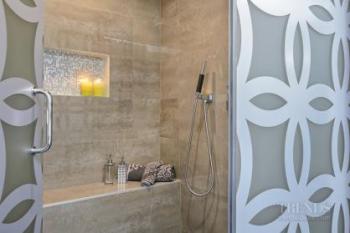 Complementing the sculpted millwork, the bathroom has a modern palette of gray, silver, and white. Large-format tiles behind the tub are etched in a palm frond pattern and the sea is evoked in the blue-green mosaics behind the vanity – both nods to the owners' heritage.

"Texture and pattern are everywhere in this bathroom," says Taitt. "The walls are hand-painted with crisscross brush strokes to create the look of plaster, and the subway tiles around the tub are in an unusual large format, bridging the gap between traditional and modern. A band of reflective silver mosaic tiles runs into the niche behind the bath, connecting with the colorful tiles opposite."

The shower and toilet had to remain in the same place due to plumbing constraints. To give the alcoves privacy but also add their volume to the greater space, a patterned glass privacy wall partially screens both areas.

The borrowed space allowed room for the elongated double vanity. Together with the floor tiles, this furniture-like wood cabinet helps ground the mainly pale-colored bathroom.