Designed for professional chefs, this renovated kitchen also meets the needs of a growing family

Location is everything when you buy a house, but it can mean making compromises in other areas. For this house, in a picturesque setting on a golf course, it was the interior that needed serious attention.

Interior designer Jamie Herzlinger says she was initially called in to tweak the furnishings, but the true scope of the project quickly became apparent, and it started with the kitchen.

"The owners are in the food business, and frequently entertain using caterers and exhibitions chefs who may be flown in from anywhere in the world," Herzlinger says. "There was no way the existing kitchen could meet their needs. It was dark and dated, and it didn't have the required functionality for the family or for entertaining. And like much of the house, it was an unattractive potato brown colour."

The designer says the existing kitchen was gutted, and extra space gained by pushing it out towards a patio at the front of the house.

"Because of its position, the patio was not used for outdoor living. This gave us another 3m of space to use inside." 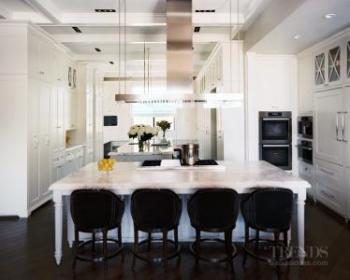 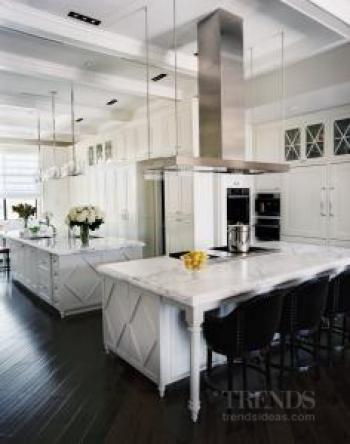 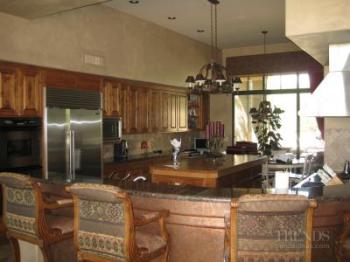 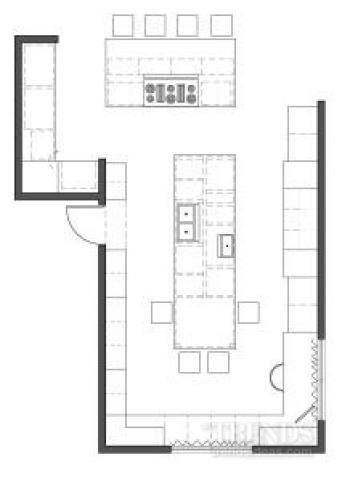 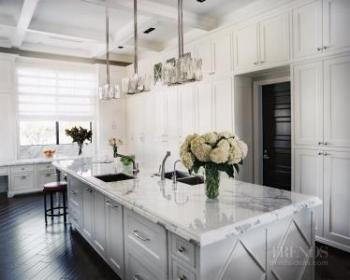 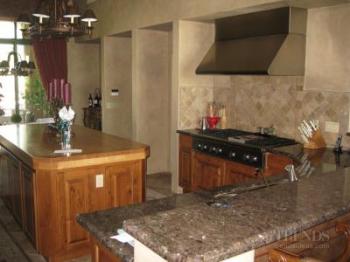 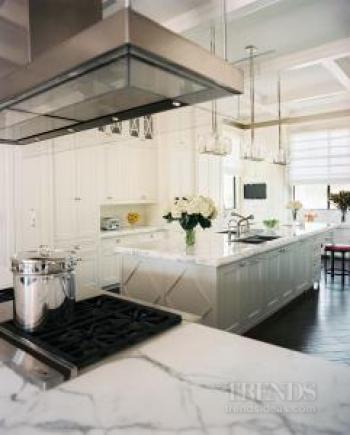 Herzlinger says it also meant the kitchen was very long, but relatively narrow. To expand the apparent width, new walnut flooring planks were laid on the diagonal. New beams were introduced to the ceiling to help contain the kitchen visually within the overall space.

However, the starting point for the design was the need for a chef's station – a massive cooking island that is like a demonstration kitchen with bar stools for guests.

"The kitchen also needed to accommodate a sous chef on occasions, so the second island with the sinks is perpendicular to the first," says the designer. "The workstations are arranged so the chefs won't collide while working. We also put the bank of ovens to one side, so they can be used independently by a pastry chef. This was one of the most challenging aspects of the design – how to keep all the chef stations linked, yet separate."

At the same time, Herzlinger needed to cater to the family's day-to-day living. So the second island incorporates a table at the far end, where the family can enjoy casual meals and snacks. The design also caters to daily rituals, such as coffee making, with a dedicated area for this activity. And there is a small home office area at the family end of the kitchen, with a place to charge phones, tablets and laptops.

Much of the visual drama comes from the design of the cabinets, which resemble refined furniture pieces. Traditional panel doors and diamond motifs on the ends of both islands complement the home's classical architectural style. They also reflect the owners' desire for a space that is less like a kitchen and more like a living area.

"The kitchen needed to be very inviting, yet not too formal," says Herzlinger. "Just like we are taught to layer clothing for added interest, so the kitchen design is layered to create plenty of visual depth. Reflective elements, such as the glass display cabinets and pendant lights, also help to make the space more lively."

The designer says she suggested an all-white kitchen because "food always looks best against a white background." The painted cabinets are teamed with Calacatta marble benchtops with a traditional profile. Contrast is provided by the dark walnut floors and black bar stools.