Remodeling a bathroom is a lot easier to do on paper than in real time. So it was just as well the redesign of this bathroom happened before the house was built.

Designer Mark Williams was asked by a long-time developer associate to change the plans for the master suite in a house that would be put on the market.

"The existing plans didn't maximize the space," says Williams. "They showed a rather choppy layout with cramped vanities and a dark little cave for a shower room. Space was lost to the circulation areas."

But the designer says the project wasn't a blank canvas. The bathroom was constrained by the building envelope and gabled rooflines.

"It was clear the space needed to be opened up, so I figuratively tore down every wall and started again. I was also able to change the master closet layout to make better use of the entire space available to the suite." 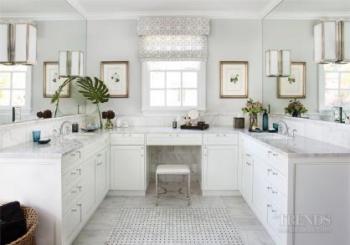 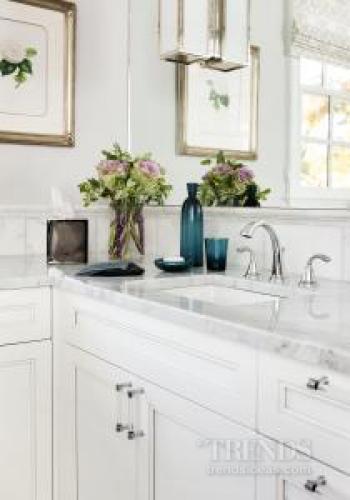 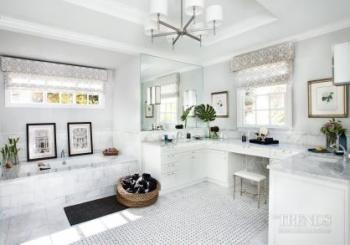 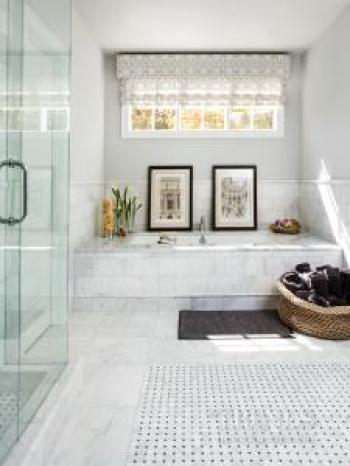 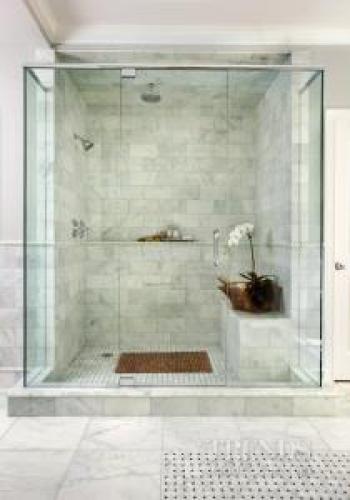 Williams says his aim was a bright, sunny bathroom that would set the right mood.

"The bathroom is where we go to get ready for the day ahead, and the last place we spend time in at the end of the day. It makes sense to ensure this is a very pleasant experience, so we can feel calm and centered."

To this end Williams teamed Carrara marble with white lacquered cabinets and walls with the softest hint of green.

"In some respects it has a slightly feminine look, but it is restrained enough to appeal to all," the designer says. "History shows us that bathrooms, like kitchens, sell houses, and most often it's the woman who gets most passionate about these rooms."

Williams positioned the tub under high windows that sit above a roof gable. The vanity wraps around three walls at one end of the room. Full-height mirrors above the vanities reflect plenty of light from the only other window in the room.

"We flanked the vanity area with sconces set into the mirrors, and also added a beautiful pendant light," says Williams. "All the lighting is on dimmer switches, which makes it easy to choose the right light level for the time of day."

A huge double shower sits at the other end of the bathroom. With glass walls jutting out on three sides, it is reminiscent of a pavilion.

"The shower is very luxurious, and it's a complete change from what was originally proposed," the designer says. "The glass walls popping out change the way you see the shower, and how it feels."

The shower is lined with Carrara marble, and includes a marble bench and shelf. The floor of the bathroom is a similar marble, with an inset basketweave mosaic resembling an area rug. This helps to connect the separate spaces.

Further attention to detail is evident in the hardware on the cabinets – the handles are polished nickel with glass inserts that give the room an added sparkle.