Nothing exists in isolation, especially not a kitchen in an open-plan living space. While user-friendly work triangles and appliances are essential, a kitchen can also play a part in the overall design, leading an interior scheme or reconciling disparate elements.

This kitchen, by interior designer and owner Dana Lane, does a little of both. The house shows an old-world face to the street and has traditional front rooms that give way to more contemporary spaces to the rear, says Lane.

"The concept is a cottage-style home with a modern addition, although everything is new."

The expansive family living and kitchen-dining area at the back of the home has several French doors and windows that open to the garden. With so much focus on the outdoors, this space is understated and light on detail, with white walls. There are no crown mouldings on the ceiling, and connections between the rooms and the niches in the kitchen are also clean lined.

Exceptions to this are the high skirting boards. This traditional touch is continued from the front rooms, as are the ornate mouldings on most doors and windows, including the doors to the study just outside the kitchen and to the butler's pantry at the rear. 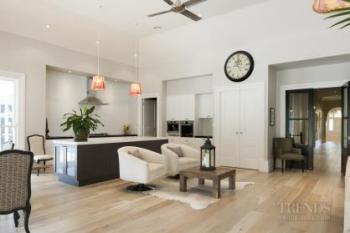 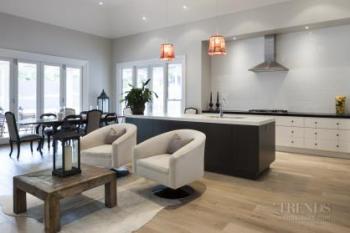 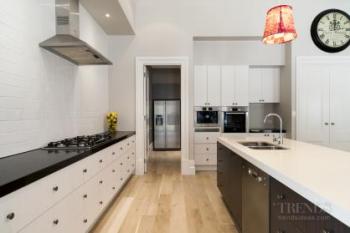 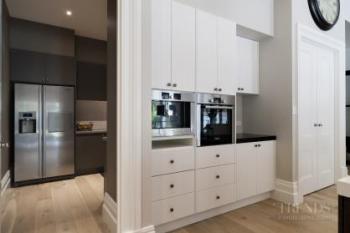 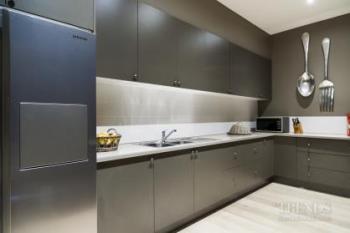 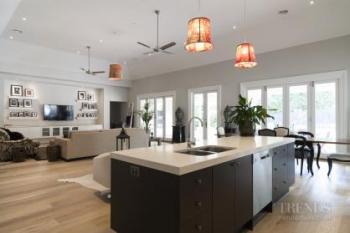 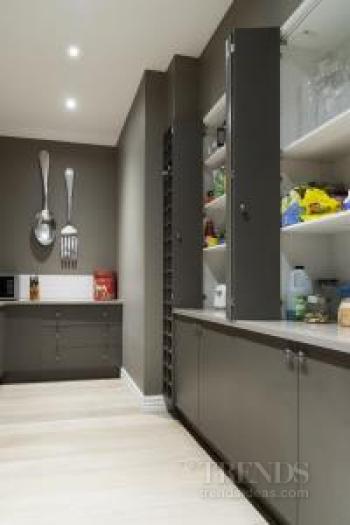 "The cabinets on the perimeter of the kitchen feature a different kind of classic treatment – a beadboard finish, much like door fronts in a French farmhouse kitchen," says Lane.

"But the kitchen is really a microcosm of the concept of the whole house – the modern and the traditional come together in this key space. For example, the island is a highly contemporary element, in a dark-stained timber that has an accentuated grain and frosted glass door panels at one end."

One link between the two different styles can be seen in the neutral door pulls used on all the kitchen cabinetry. In another crossover, the classic subway tiles have been given an updated treatment in this design, running right up the almost full-height splashback and turning it into a prominent feature.

This kitchen celebrates other contrasts, too, says Lane.

"The black benchtops and white cabinets of the perimeter cabinetry are inverted on the island, which has a dark wood base and white stone benchtop."

The island also has a furniture-like appeal, appropriate to its role as a visual buffer between the living spaces and the benches and cooktop at the rear of the kitchen.

In practical terms, the kitchen also works well. Ample cooking, prepping and cleaning surfaces are backed up by a generously sized walk-in butler's pantry with plenty of storage.

This behind-the-scenes workspace has a modern look, with flat-panel cabinet doors and minimalist handles, although the subway tile splashback is continued here, providing a visual link with the kitchen.