Everyone gravitates to the kitchen, and that's precisely why it has become the relaxed social hub of the home. Invariably it's also a room that opens to the outdoors, which adds to the sense of informality.

The kitchen in this new Georgian-style house is such a gathering place for the family. It overlooks a pretty garden, which has influenced both the material and colour palettes. But despite the informality of the setting, the owners wanted the kitchen to tie in visually with the more formal elements of the house, says architect Anne Adams of Stuart Silk Architects.

"Because this is a Georgian house, there is a formality that extends through all the rooms on the main floor. Ceiling heights and decorative mouldings are consistent from the entry hall into the living and dining rooms. So it made sense to continue this detailing in the kitchen, which can be seen from the dining room."

In keeping with this theme, the cabinetry features traditional white-painted panel doors with an inset detail, and an antique nickel finish on the hardware. The mouldings on the island mimic the detailing of the crown moulding, which helps to unify the space.

Wherever possible appliances are integrated, says Adams, who worked on the project with interior designer Kylee Shintaffer. 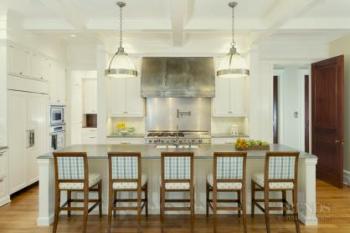 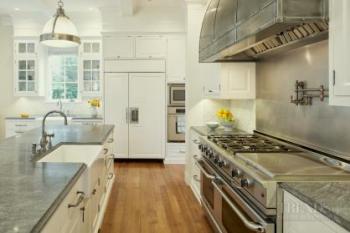 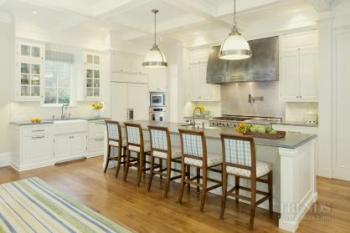 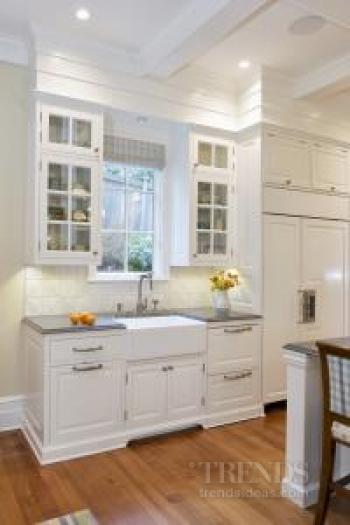 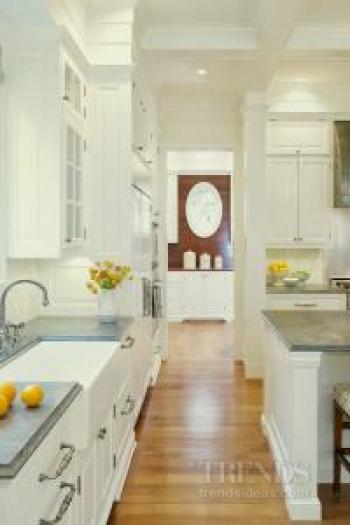 "The largest appliance was also the biggest challenge," the architect says. "The owner wanted a freestanding range, but the subtlety of the interior design meant there was a risk it could dominate. To avoid this, we placed it behind the island where it is partially hidden, and added a custom shroud-style rangehood.

"The hood is fabricated from steel, but has been treated so it has a patina resembling aged zinc or pewter. With its bands of steel, it looks like a very old fixture that has been salvaged."

Two matching farmhouse sinks are another traditional touch – the sink on the island is used for food preparation, while the sink on the perimeter cabinetry is the clean-up area. There is also a large pantry that has another sink and plenty of bench space. This room, which can be glimpsed from the kitchen, features a reclaimed mahogany splashback and benchtop.

"We have taken into account the fact that the owners love to entertain," says Adams. "There is a side door that can be used by caterers, and the kitchen has been designed so it is easy for more than one person to work at the same time."

Benchtops feature Pietra Del Cardosa, which is durable sandstone that looks a little like bluestone. This provides a visual link to the bluestone paving on the terrace, which helps to bring the outdoors in.

Other materials include white splashback tiles with a raised relief pattern.

Adams says much of the detailing in the kitchen is subtle, but it helps connect the space with the surroundings. Varying tones of blue, green and soft lemon also help, by creating a strong visual link with the garden beyond.