AS FINITE ENERGY resources shrink and our planet's population rapidly expands, ecologically responsible architecture seems the only possible way forward. Buildings of the future will need to be sensitive to energy use at every turn, from the swish of their rooftop wind turbines to the click of sensor-activated tapware found on every floor.

The proposed Cor mixed-use highrise in Miami is set to provide a benchmark for ecologically sustainable design. Conceived by Oppenheim Architecture + Design, every aspect of the green tower's striking exterior provides a valuable design function. At the same time, its eco-friendly makeup optimises renewable energy, boasts reusable resources and even promotes economy of space and energy in the way it invites its occupants to organise their lives. Cor will have 113 condominium units, 1867m2 of office space and 502m2 of retail space at ground level.

"We hit on the idea of creating an exoskeleton for the tower – a framework that would not only free up internal space at basement and ground level but also fulfil myriad other structural and design functions," he says.

What appears as a whimsical lattice structure was actually a direct design response by the architect and engineer to the constraints of architectural physics – with the exoskeleton maximising both vertical and horizontal strengths through diagonal stresses. 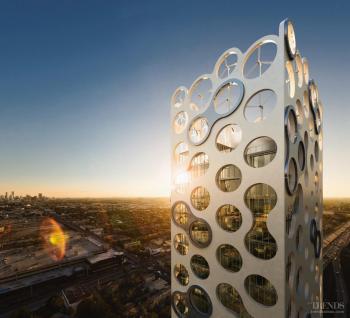 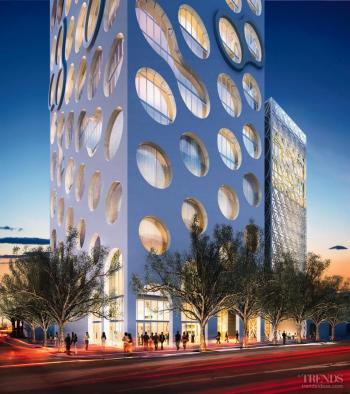 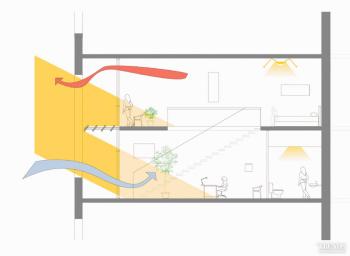 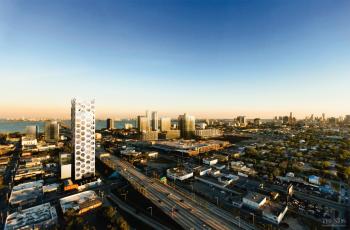 "The exoskeleton's circle elements could equally have been squares and retained the same structural integrity," says Oppenheim. "But the idea of shaping the uppermost apertures to frame energy-reaping wind turbines was mooted and the distinctive exterior appearance was born."

As the design evolved, Cor's exoskeleton became a model of design efficiency – set to provide building structure, thermal mass for insulation, shading and cooling, enclosures for terraces and loggias for congregating at ground level. Then there are the uppermost apertures with whispering wind turbines tucked in behind them and raised photovoltaics ringing some of these soft-circle apertures.

"Advanced turbine technology has allowed us to design a building that can make the most of high altitude winds." says Oppenheim. Ergonomically superior wind turbines, 27 storeys high, generate pollution-free electricity from breezes off the ocean. These will supply most of Cor's central building electricity demands.

Reflective rings on some of the uppermost circles of Cor are comprised of photovoltaic cells, or giant solar panels. In Miami's sunny climate, these will pick up solar energy day in day out – another significant energy source to be channelled back into the building services. Similarly, solar rooftop panels will supplement the condominium tower's water heating requirements. The lazy circles of Cor's distinctive facade are also designed to help control the impact of wind and solar gain for the apartments.

The exoskeleton is a sheer concrete wall structure, providing thermal mass and solar shading for natural cooling and reduction of solar gains – the south interior facade, for example, will be set back two metres from this to lessen the sun's impact. An organic look belies the highly strategic spacing that optimises climate-influenced living conditions. The reflective, off-white facade further resists solar gain and, similarly, glazing specifications across different orientations will reduce solar gains and maximise daylight penetrations. South and west facades will have darker, reflective coatings and all glazing will have a Low-E coating, reducing energy loss or solar gain by as much as 30-50%.

"Standing on terraces, residents can actually come to grips with the building's exoskeleton, literally, as the soaring walls also form part of the terrace bannisters. This hands-on proximity will add to owners' physical impression of Cor's mass," says Oppenheim.

The concrete skin itself will have a high fly ash content, a waste by-product from coal-fired power plants. This utilises what would otherwise be a pollutant to increase the concrete's strength and life expectancy.

Cor will offer green roofs that provide stormwater run off and a buffer for both solar heat gains and the urban heat island effect – where on warm summer days, air in urban areas can be 10-12°C hotter than surrounding areas. This can place increased demand on air conditioning needs and raise pollution levels. Green roofs help to off-set this phenomenon. Cor features rainwater and other greywater runoffs to irrigate exterior landscaping features. Water runoff is simply stored in a tank and recycled on demand.

That Cor is lean as well as green is another important ecological plus. While building upwards may not be something new, it is an appropriate response to urban density. The alternative – urban sprawl – provides an ever-increasing drain on land and the massive amounts of energy required to drag people to and fro from suburb to city centre.

Attendant to this is Cor's mixed-use makeup, with residences and offices in harmonious coexistence. Energy-savings on a mass-transit scale, together with a heightened sense of local community, are at least two urban advantages. Retailers and eateries at Cor's ground level contribute to its focus as a social centre for residents, office workers and passers by.

Cor will be as green on the inside as it is on the outside. Forest Stewardship Council (FSC) certified wood has been specified for the interior's wood products, particularly flooring. Bamboo, an eminently renewable source, makes up its corridor floors and recycled glass tiles are used on the condominium bathrooms. Low-flow bathroom fixtures and appliances combine with sensor-activated tapware to bring more precious water savings. Energy star appliances and energy-efficient lighting will feature throughout the apartments, while Cor's paints, carpets and glues attract a low-emission volatile organic compounds (VOC) rating.

The three elevators that service the tower work on a complex, optimising computer programme, advising you which elevator will speed you to your destination the fastest and with the least stop-start electricity drain.

Much of the eco-friendly makeup of this building utilises age-old energy savings that became discarded in the face of the industrial revolution, says Oppenheim.

"Windmills in Denmark, adobe brick houses soaking up the sun's rays for night-time comfort, even the hanging gardens of Babylon – essentially the first green roof project thousands of years ago – all of these represent thoughtful, energy-saving responses to the environment. These age-old awarenesses are being reinvented today with the optimising input of modern technologies and science."

Oppenheim says Cor represents a vanguard for building design in a climate that is ready for it – in political as well as ecological terms.

"The United States Green Building Council is fast becoming a force to be reckoned with, and likewise the Leadership in Energy and Environmental Design (LEED) Green Building Rating System – a nationally accepted benchmark for the design, construction, and operation of high performance green buildings," the architect says. "The near future will see a rapid increase in ecology-focused constructions. Driven by government regulations and market trends, green technologies and materials will become increasingly more affordable and even a marketing imperative to attracting both tenants, and in turn developers' bank managers."

While buildings such as Cor are kind to the environment in every way, the ultimate goal will be their total self-sufficiency. However, this is still a difficult ask in a humid climate like Florida's where energy-hungry air conditioning is still a prerequisite to making life liveable.

"We've seen many revolutions in recent years – first the internet-information revolution, then the communication via cell-phone revolution – and now the green revolution, particularly the green building revolution, is fast gathering strength," say Oppenheim.

"The way I see it, and the way an increasingly large body of architects, urban planners and government legislators see it, is that as time passes we simply have no other choice."