This house extends across an expansive rural site – linear wings lead off in four directions, bringing sectioned vistas and shelter from the elements

Natural beauty, fresh air, the peace and quiet – rural sites offer all of these, but the greatest attraction of the countryside for a homeowner is that feeling of space, and plenty of it. When designing a house on a generous block of land it makes sense to celebrate this advantage.

The owners of this residence had lived in a city apartment for many years. The couple wanted to relocate to the country in a house that would provide plenty of living space for their four adult children and their families when they came to stay. Naturally, they wanted to make the most of their two-hectare rural property and chose the multi-winged house design suggested by Sheppard + Rout Architects over two other submissions that had outlined more traditional approaches. Project architect Jonathan Kennedy says the house makes the most of its situation in many ways.

"The basic form of the residence is a central core – containing the kitchen, dining and formal living spaces at ground level – with four wings leading off in four directions," says Kennedy. "These variously shaped arms effectively divide the immediate surroundings into four separate courtyards."

These comprise an arrival court in one, a lawn or sculpture courtyard in another and a large parterre garden in the third. The last quarter is occupied by a stand of 30 maturing red-bark gums.

The wings offer degrees of separation for occupants as well as dividing the courtyards. Most have at least one bedroom and bathroom. The garage and laundry are found in a small single-storey wing extending off the gallery hall in the central block of the house. This also contains a small bathroom for gardeners and for anyone working in the garage. 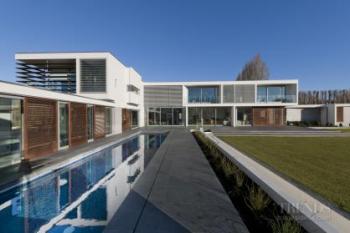 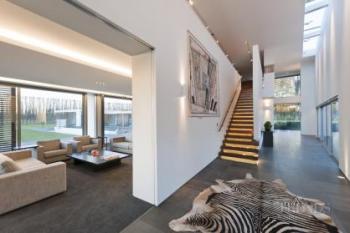 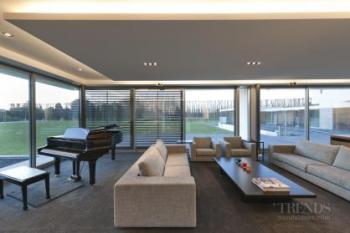 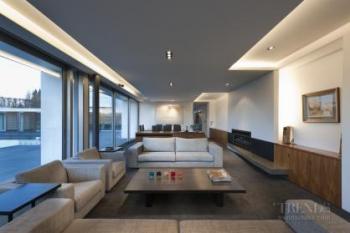 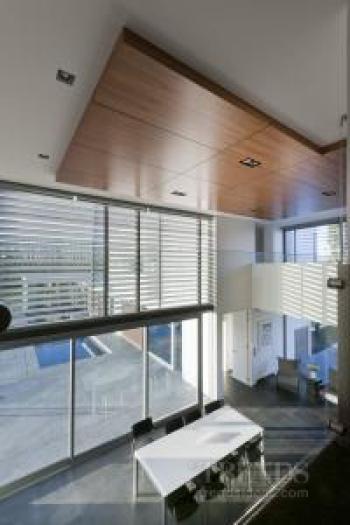 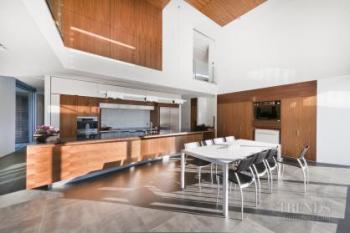 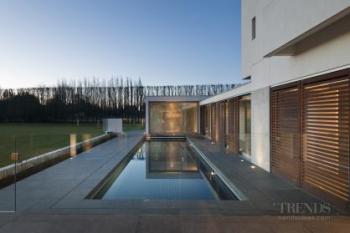 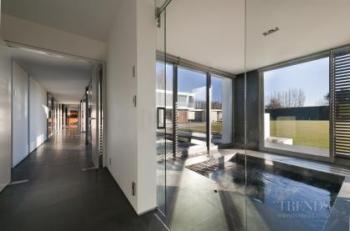 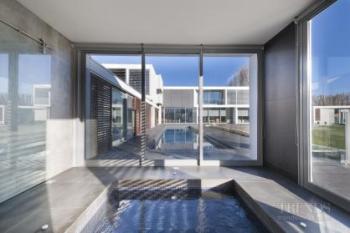 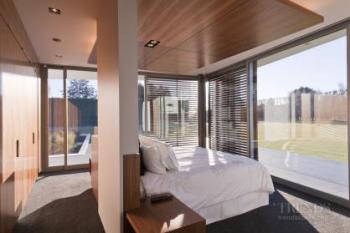 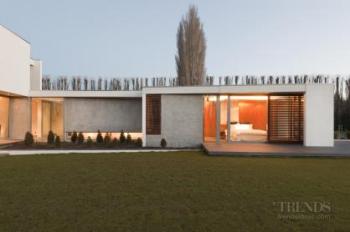 A longer single-level wing has a large guest bedroom with dressing area, and an ensuite bathroom. Together, these wings enclose the entrance court.

The fourth wing – perhaps the home's most dramatic – houses a den and gallery corridor on the ground floor with the master bedroom, dressing and ensuite above. The end of the wing extends further out into the garden and is home to a fitness area, comprising a spa, steam room, sports gym and small bathroom. This arm of the house provides wind protection for the swimming pool, which runs between the kitchen-family room and the fitness amenities.

As the house stretches its limbs out in all directions, the facade treatments further emphasise this horizontal orientation, making the structure seem even lower and longer than it actually is. Louvre slats – there are four different types – feature prominently on the exterior.

"Introducing shutters on both sides of most wings also gives them a permeable quality," says Kennedy. "The operable blades, combined with extensive floor-to-ceiling glazing, expand the available views, allowing the owners and their guests to look right through from one courtyard into the next."

On the interior, views are celebrated from every angle. The house is designed to lead the eye from the core, or kitchen, right out along each wing, through end windows to the rolling countryside and treescapes beyond.

The sense of spaciousness is not limited to the horizontal – the entry and central kitchen are both double-height spaces. Clerestory windows flood additional light through these volumes. The open bridges that lead to the upstairs master suite and a library behind the kitchen add to the visual appreciation of the upper volumes. Apertures allow views down and across the kitchen and entry.

An understated colour and material palette features grey marble tile, black carpet, white walls and black walnut panels – which are actually a rich brown. This is in keeping with the minimalist-gallery aesthetic and makes the extended sightlines seem even more impressive.

The home attracts and holds heat due to its orientation, the provision of shutters that admit or block heat transfer and the thermally efficient tilt-up panel construction. Double glazing and in-floor heating also play their part.

"This home makes most areas visible from the core while offering privacy between wings – it is a house designed for many and for few," says the architect.