To the point – NAB building by Woods Bagot

Large firms and multinational corporations have an increasing awareness of their broaderresponsibilities – not just to their own workforce, but also to the wider community. And it's an outlook that is reflected in the design of many new corporate premises.

The NAB office at 700 Bourke St in Melbourne's vibrant Docklands precinct is a prime example. Developed, owned and managed by Cbus Property, the 16-storey Grade A office building needed to set a new global benchmark for sustainable workplace design – that was the brief given to the architectural team at Woods Bagot.

It was a benchmark that had to be reinforced by the architecture, says Monica Klyscz, head of commercial property for NAB.

"We wanted the building to make a strong visual statement," Klyscz says. "Because the site is next to the Southern Cross train station, there was an opportunity for the development to establish both a landmark and a gateway to the Docklands precinct. We envisaged an all-access area for the public, with cafés, retail outlets and an NAB store."

Authenticity was also critical – the building needed to be true to the site in terms of its context and the materials used. 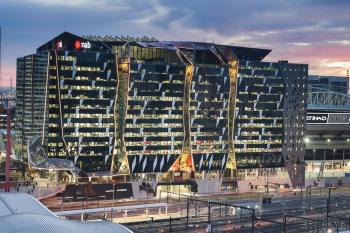 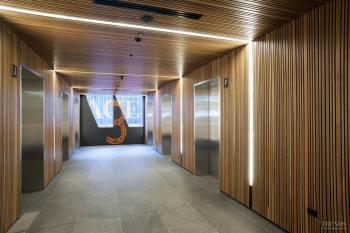 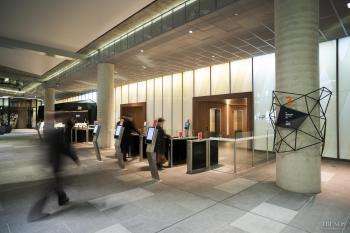 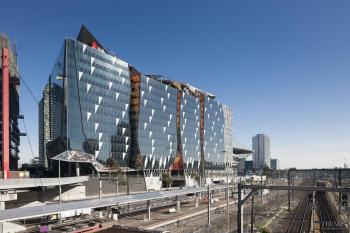 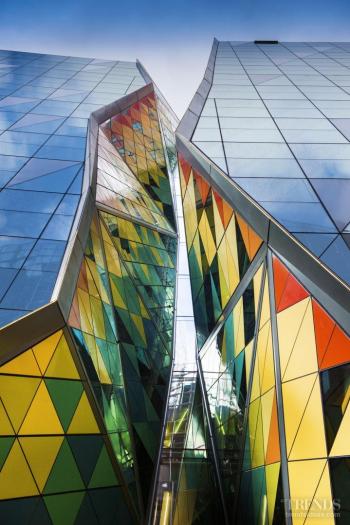 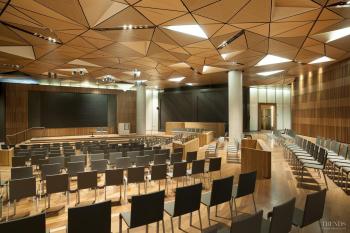 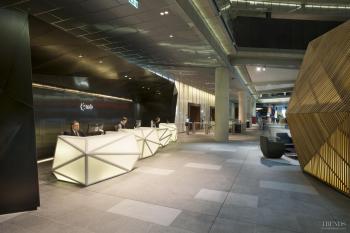 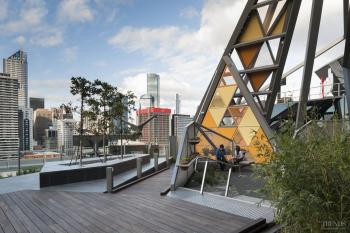 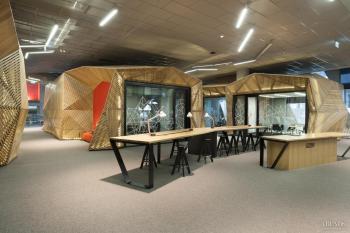 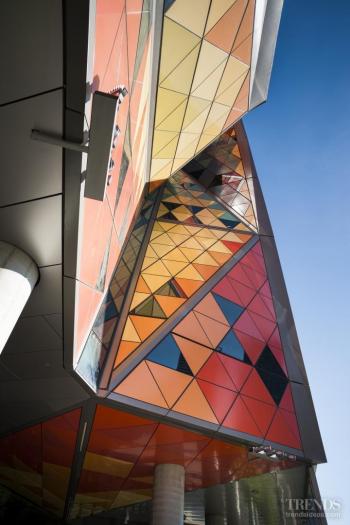 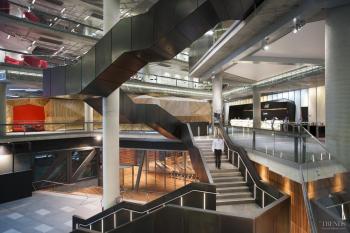 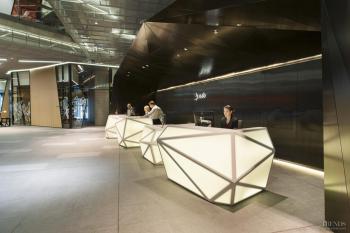 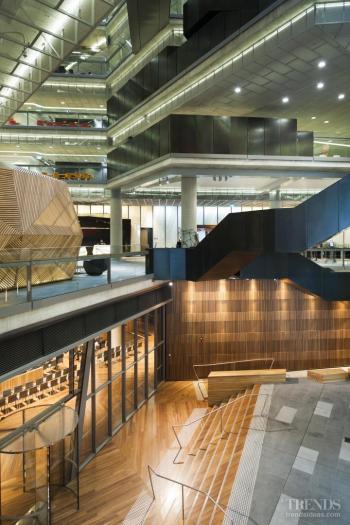 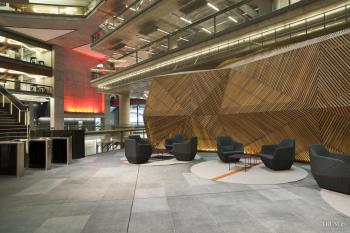 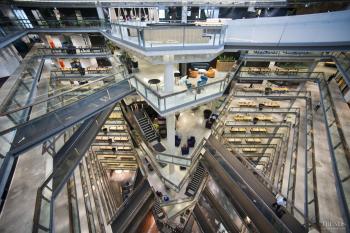 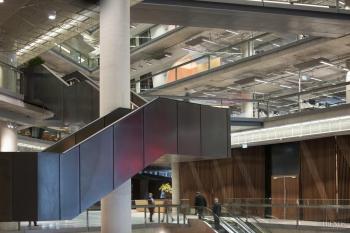 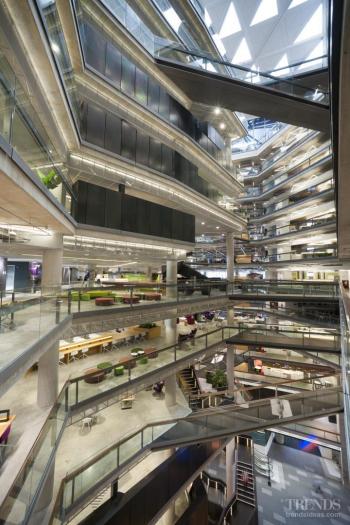 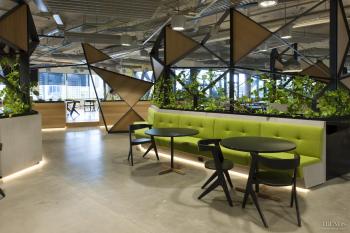 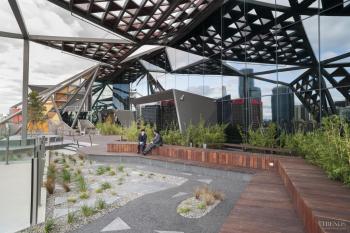 To this end, Woods Bagot referenced the site's geology and proximity to the water. The architecture responds to the triangular shape of the land and the fact that the site straddles the basalt shelf under Melbourne, and the silty base of the Docklands area. This natural tension is reflected in the external fissures that draw energy up through enclosed atria, and break up the monumental horizontal mass of the building. The triangular panels that clad the fissures echo the colours of the earth and landscape. Other triangular glazed panels on the front facade have a reflective luminosity that mimics the rippling waters of the bay beyond.

The triangular motif extends up to a canopy on the rooftop terrace, and to the inside, where the geometry informs the interior design, starting with the concourse and sky lobby.

In line with the desire for an open, transparent workplace, there are multiple entry points.

"Just as we chose to activate the concourse level with retail tenancies, restaurants and cafés, so we wanted to encourage people to come into the NAB environment," says Klyscz. "This was part of the overriding concept of openness and transparency. We have incorporated an auditorium, exhibition spaces, seminar rooms and a childcare facility that can be shared with the wider community."

A spectacular, full-height atrium reinforces the sense of connection, providing views both vertically and horizontally across all levels. Open staircases and bridges link the various levels, with the bridges crisscrossing the atrium at an angle, reinforcing the triangle geometry. Informal meeting areas are positioned at the pivotal point on each level.

The 63,000m2 building, one of three NAB offices in Bourke St, brings together approximately 6000 staff from five different properties. Klyscz says many of the workers came from campus-style workplaces, while others had worked in more traditional offices.

"The modern workplace is all about interaction and collaboration," says Klyscz. "We want to encourage knowledge sharing and innovation through formal and informal meetings, and through chance encounters.

"We have incorporated flexible, real-time working principles, with around 95% of employees working in a diverse range of spaces or micro climates. People work in teams and can choose to work in the environment best suited to the task in hand."

"Interestingly, the triangular-shaped workplace provided by the architects has been proven to be an environment that encourages collaboration."

The building, which was constructed by Brookfield Multiplex, has achieved a 6 Star Green Star Office Design v3 rating, in keeping with the NAB focus on a sustainable workplace.

"Sustainability has been a priority for the NAB property portfolio for many years," says Klyscz. "We were one of the first corporations to achieve carbon neutral status in 2010."

Other eco-friendly initiatives include reduced waste during construction, sustainable furniture and furnishings, extensive daylight penetration provided by the atrium, energy-efficient sensor lighting, and the provision of 600 bicycle racks. More than 6000 indoor plants help to improve the air quality.