To the manor born

The traditional, European-inspired exterior of this house belies the modern interior found behind closed doors

To the manor born Discover this article's resources 0

In an area dominated by Traditional, European, and French Colonial architecture, the term Modernist could be construed as a swear word. Yet, as the house featured on these pages shows, it is possible to amalgamate two disparate styles – one for the exterior, one for the interior – without either slavishly conforming to the other.

The answer is to achieve a level of detail for both styles that will then be identified as the point of commonality, says interior designer William Stewart, principal of William Stewart Designs.

"Our client wanted us to take a traditional, European-influenced house, and introduce Modernist aesthetics to it. As a yachtsman, he finds the pared-down simplicity and streamlined allure of Modernism very appealing. The client was also very intent that his home should have a masculine appearance."

The result, says Stewart, is an interior design scheme that is unusual for the style of architecture.

"Typically, a homeowner drawn to this sort of house would want an interior that references a completely different historical period or perhaps something more chateau-like. 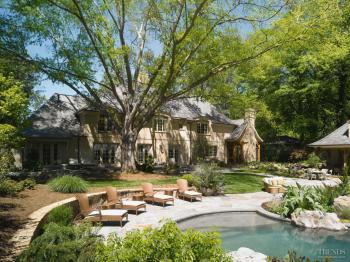 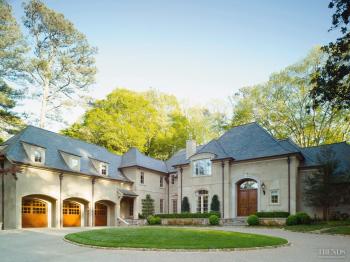 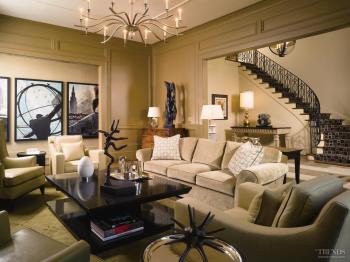 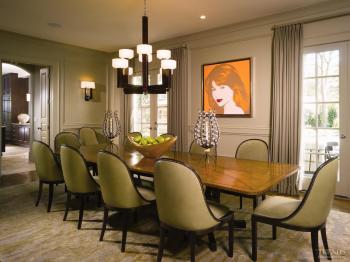 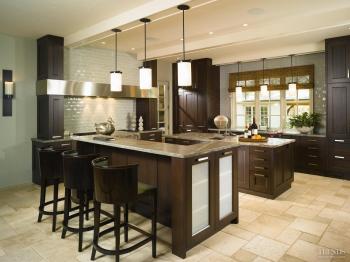 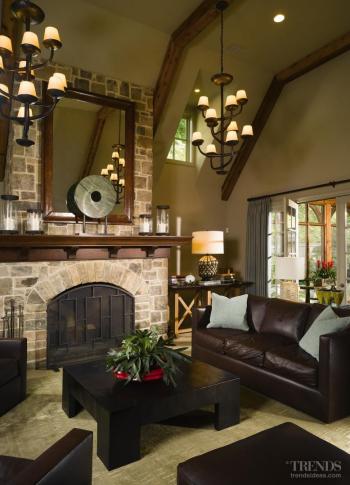 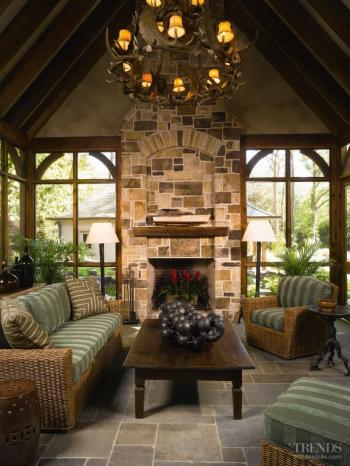 "Instead, we went with a 1930s gentleman's club sort of feeling, very masculine, and interspersed it with pop and contemporary art to liven the mix."

"By rejecting the conventional choices one would associate with the existing architecture, and by taking liberties, we were able to go modern in a non-modern home," says Stewart.

Construction on the house was already underway when Stewart was brought onto the project. However, with aesthetic control of the interior came measured control over the exterior.

"We were able to influence the architecture in a more contemporary way. For example, we designed the railing and ironwork, matching them to their interior counterparts," he says.

"We also chose not to have details on the exterior – such as shutters – which would have given the house a less-modern appearance. We were constantly paring things down and simplifying, in keeping with the client's brief to provide a masculine-looking home."

Stewart is the first to admit that, due to the formality of the home's spaces, the finished interior does not conform to Modernist principles. However, the underlying French Colonial or Traditional feel has been contemporised.

"While the home doesn't have a pure Modernist interior, it certainly takes most of its cues from 20th century modern vernacular. To create intimacy in such large spaces, we selected furniture – such as the Donghia wing-back chairs in the living room – that helps to enclose the space within the room. In fact, we chose furnishings that despite their clean, simple lines, occupy a lot of space, so as to not leave the rooms feeling under-furnished."

Contemporary art plays a vital role in expressing the context of the rooms. Stewart says the several Warhol portraits found throughout the home are ideally suited because of their historical importance – in a Modernist sense – and because of the glamour they convey.

Similarly, sculptural pieces can be found at strategic locations throughout the house. Their placement has been designed to draw the eye from one Modernist element to another.

"Less artistic elements were also chosen for their aesthetic duality. Pieces such as the Art Deco-inspired macassar chandelier and sconces were used in the dining room to play against the more traditional architecture."

In accordance the client's brief, these pieces – teamed with natural materials and muted tones – reinforce the pared back, yet bold look required.

"We wanted to design an impressive home for our client, so we steered clear of anything that would compromise the clean, masculine vocabulary of the rooms. We chose a lot of leather, dark woods, bronze and nickel metals, along with other materials that one would equate with a gentleman's club," says Stewart.

"The goal was to evoke an elegant environment through the use of materials, forms, and colours. Khakis, olives, and pale sages create a palette that is both colourful and subtle."

"Had this project been in a high-rise, or perhaps a more modern structure, we would probably have approached the interior with a more hard-edged aesthetic. The client favours minimalism, but this house would have taken minimalism like an ill-fitting suit. We had to temper our approach."

In order to do that, Stewart incorporated antiques – such as vintage clocks and models of boats – and mid-century lamps, with the more contemporary sculptures and used these as accessories in place of the usual ornaments. There was even the incorporation of less traditional pieces.

"We used rustic elements, such as a chandelier made of antlers for the screened porch, to soften the aesthetic. We wanted to keep the lines that divide periods and styles blurred."