To the manor born – extensiver remodel by Burns & Beyerl Architects

Fundamental architectural changes will bring improved functionality to an under-considered home. However, it can be the close attention to detailing that ultimately allows a house to really shrug off one personality, and take on another.

This 1940s home started out as a modest farmhouse. Although it had good bones, it was short on detailing and suffered from an incongruous box-like addition in the ‘80s. A comprehensive renovation inside and out by Edward Twohey and Gary Beyerl of Burns & Beyerl Architects has given the house the grace and dignity of an English manor. Interior finishes were the work of Peyton Merrill Design.

Initially consulted on the kitchen area, Gary Beyerl suggested removing the two-story addition, and introducing more appropriate elements and detailing to realize the home's full potential. Taking inspiration from the front porch, the concept was to create two new pavilions – with a similar look on each side of the house drawing everything together.

"In addition, we suggested adding a new family room at the end of the home, more in keeping with the original scale and style. The owners decided all this work would go ahead."

First Twohey and Beyerl replaced the rather spindly columns on the entry porch with more substantial versions. These were repeated on the new pavilions at the rear and side of the home. 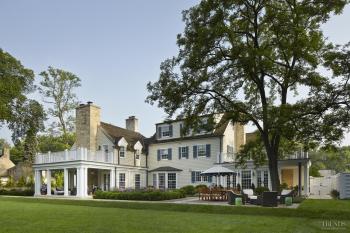 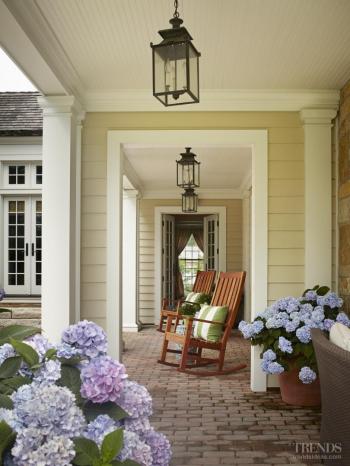 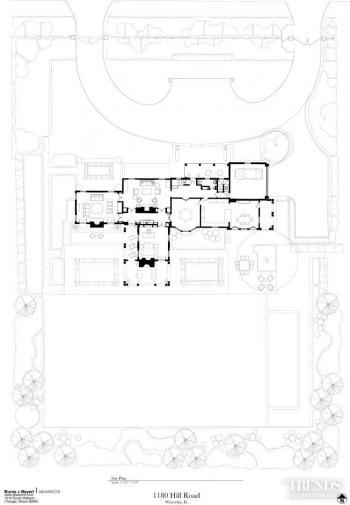 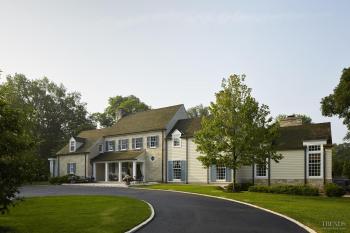 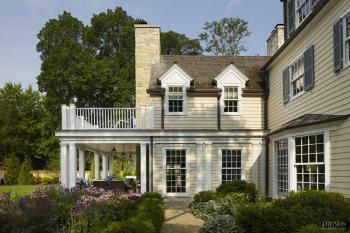 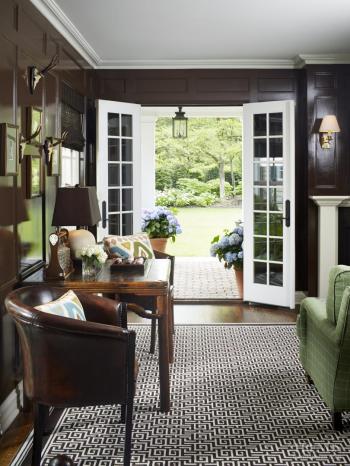 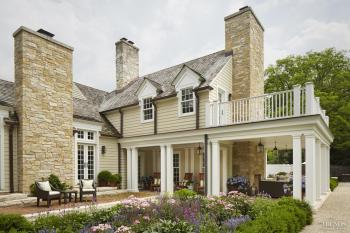 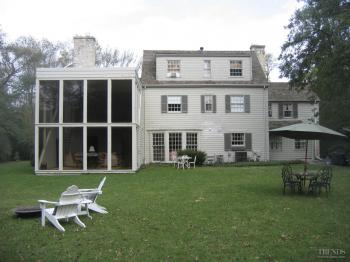 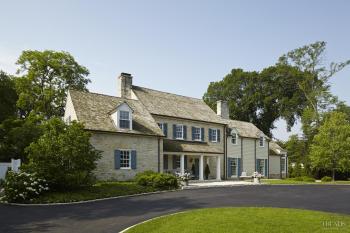 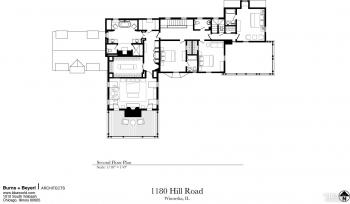 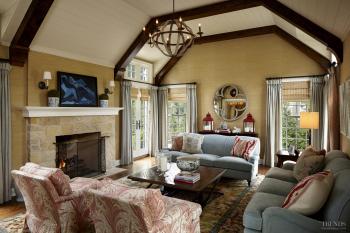 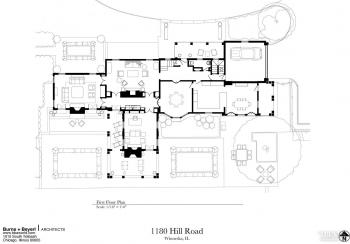 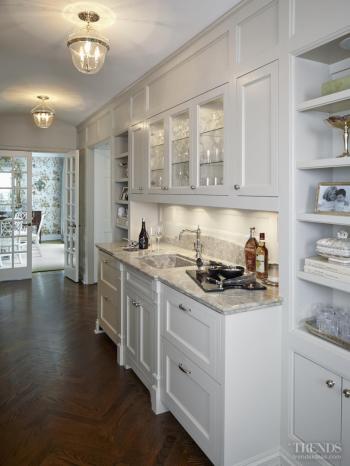 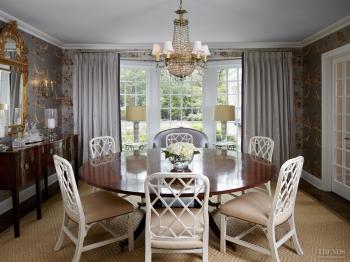 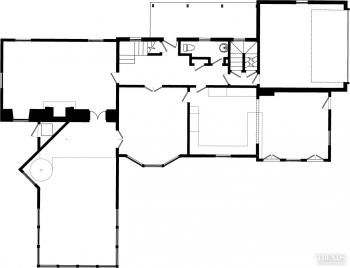 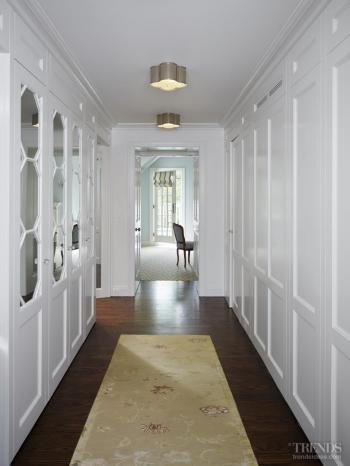 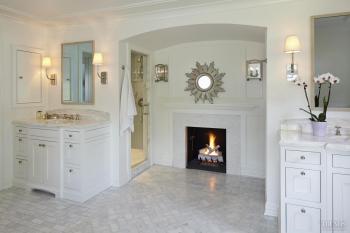 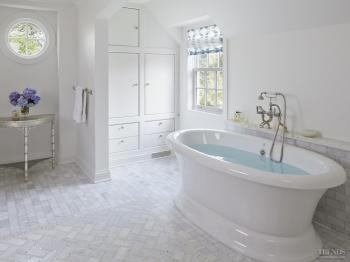 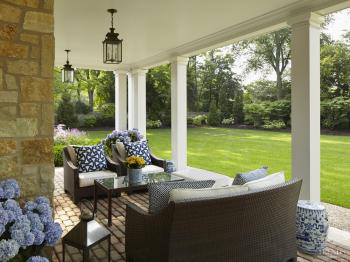 "For the family room extension, we decided to continue the look of a series of distinct yet complementary volumes. To this end, the family room has a rustic stone base, which works as a differentiating factor and as a continuation of the material used for the chimneys."

New exterior detailing includes dormers breaking across the eaves to match the existing windows, a horizontal band around the facade and engaged pilasters, says Edward Twohey.

"With these changes, the house achieved a sense of cohesion and formality, and now looks its best from all angles. To reinforce this, we reoriented and reconfigured the approach. A looped driveway now leads up to the entry in a gentle swoop, allowing visitors to take in the length of the house at a glance."

Formal landscaping by Culliton Quinn adds to the visual drama of the covered porches.

Interiors were also part of this project. Now a central corridor with a wet bar opens to the family room, existing formal living room, dining room and office. Upstairs, rooms were also rearranged. A new master bedroom was created on the upper level of one pavilion, with the original master bedroom repurposed as the master bathroom. The upstairs hallway was set directly above the one on the floor below, and the two-car garage was extended in length.

Designer Peyton Merrill says she wanted the interiors to reflect the more dignified look of the upgraded architecture.

"However, for the new family room, a more rustic, relaxed feel was appropriate. I had been on vacation at Sea Island, Georgia, and took inspiration from the local architecture there to introduce wood beams and a tongue-and-groove ceiling. The stone fireplace brings the rusticity of the chimneys inside, and the light fixture is made from oak wine barrels."

Merrill says she chose grasscloth for the walls to warm up the space visually.

"I wanted a more formal look for the dining room and consequently specified a silver-leaf wallpaper with touches of pink and purple. The Suzanne Kasler/Hickory Chair dining chairs contrast the dark wood of the round table, while the chandelier sets off the scene."

On the second story, the central hallway has the look of 1920s Hollywood, says Merrill.

"Operable wall panels open to storage and a walk-in wardrobe. We chose hexagonal mirrors to add to the glam factor. Crown mouldings are repeated from existing detailing."

The original fireplace has been retained in the new master bathroom, where marble floor tiles and a freestanding tub add to the refined, resort-like aesthetic.