It was a case of second time round for the team behind this kitchen remodeling project. Having designed and built the original kitchen 15 years earlier, the team was called on again to update the interior to better suit the family, which is now using the house as a summer vacation home.

Architect Robert MacNeille of Carpenter & MacNeille Architects and Builders says the original remodeling project was modest and designed for a young family.

"The kitchen was due for an update," he says. "The owners also wanted the kitchen to have a better connection to the rest of the house, so it would be more of a gathering place for friends. And they wanted it to fit seamlessly with the shingle style of the Colonial Revival architecture that was being developed for the house as a whole."

Interior designer Lynn Morgan says the interior needed to be crisp, light and airy, in keeping with the summer theme. White-painted cabinetry contrasted by natural wood and accents of blue and green gives the house a refreshing beachside aesthetic.

To enhance the traditional style of the architecture, the cabinets have paneled doors and drawers with classic bin pull hardware. Painted beadboard on the kitchen walls reinforces the character of the interior. 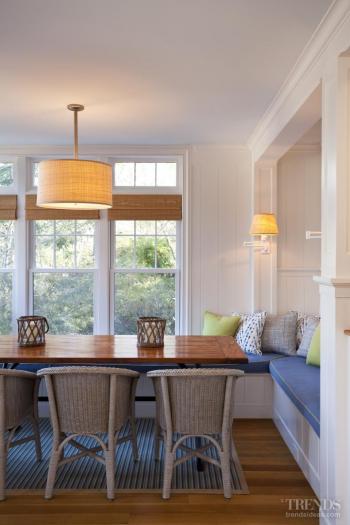 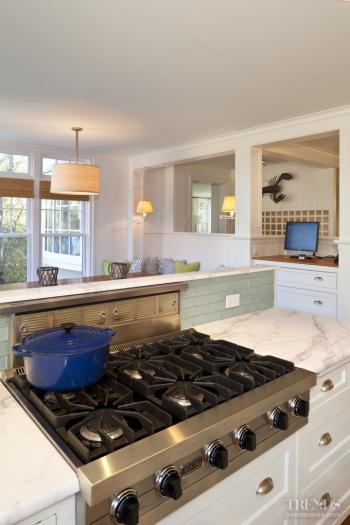 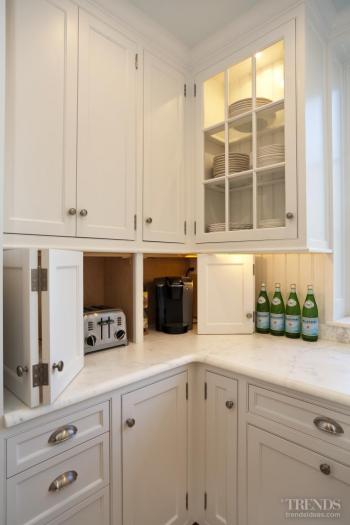 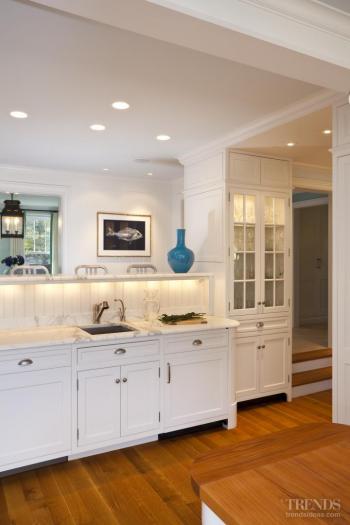 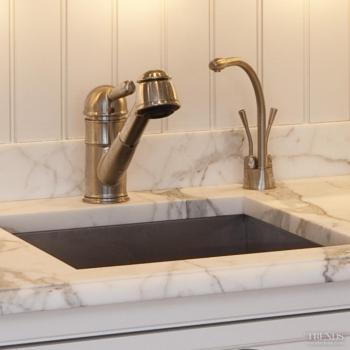 Designed in a U shape, the kitchen incorporates a central island and a second peninsula with a bartop, bar stools, and an additional workstation.

"The cabinetry for both of these secondary work spaces has more of a furniture look," says MacNeille. "This is something we like to do with many of our kitchen projects – it helps to avoid the appearance of a great mass of built-in units. We also integrated a large refrigerator and freezer in the cabinets on either side of the wall ovens so the appliances would not be too overpowering."

Display cabinets feature glass inserts in the wood shelves that allow the interior lighting to shine down through all levels.

To enhance the social aspect of the kitchen, the cooktop is positioned on the main peninsula. A pop-up downdraft provides ventilation. The backsplash in this area features watery sea-green glass tiles that are in keeping with the blue-green theme that can be seen throughout the house.

"The owners wanted some nautical references, and these Anne Morrison pendants ensure the look is not too cute or predictable."