This multiple-level office has a central, unifying wood spine

A sculptural ribbon of wood winds through this new office, establishing a design vocabulary that's in sync with the company's vision

This multiple-level office has a central, unifying wood spine Discover this article's resources 0

A move to a new, purpose-built office is a great opportunity to improve on what went before. And more often than not, that means an open, collaborative work space, and a more flexible environment that helps to futureproof the business.

When Clariant Chemicals, a leading specialty chemicals company, moved into its new 9290m2 office in Airoli, Navi Mumbai, the operations base needed to reflect the company's vision.

Kalhan Mattoo, one of the principals at Planet 3 Studios – the company commissioned to design the new office – says the managing director was looking to make the organisation more open and connected.

"They wanted a more fluid office, with less separation between activities and functions – they were looking to consciously break down boundaries. The design was to further that ambition."

Spread over four floors (8 to 11), the project came with complications right from the onset, as the multiple levels did not share a structural core. Additionally, there were concerns about how the open floorplan might impact the usability of floor space in the office. However, meticulous pre-planning ensured the design best underscored the client's vision. 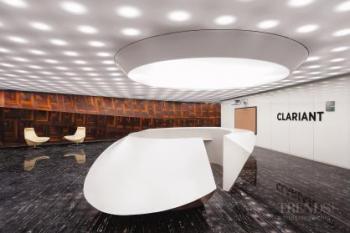 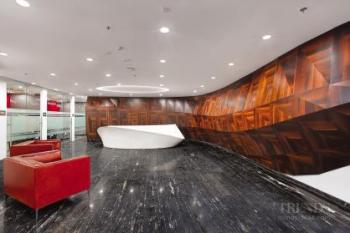 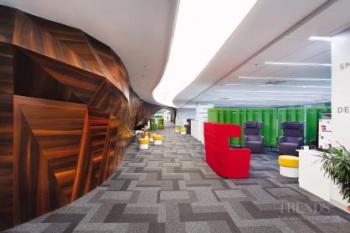 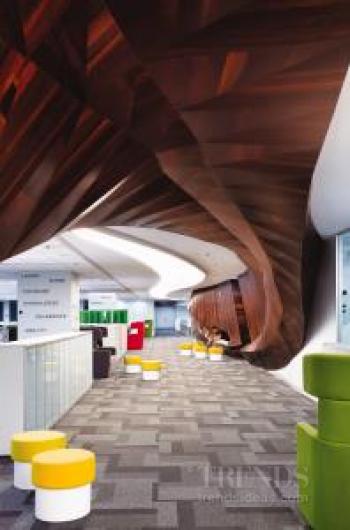 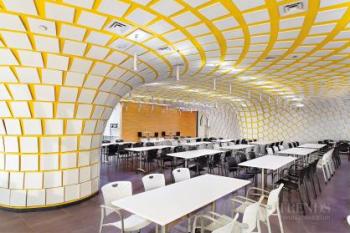 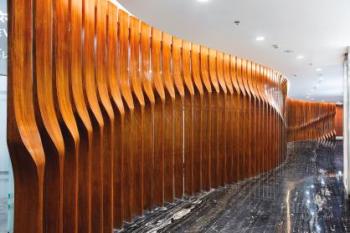 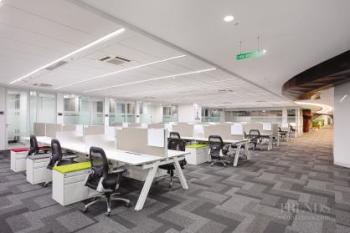 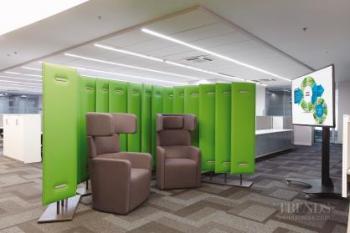 The problem of the multiple levels not sharing a single core was addressed by locating the main reception on the ninth floor. This serves as a holding area for visitors, as well as a connection between the two structural cores.

Mattoo says the reception area was designed so it could also serve as a staging area for the client's brand. At approximately 370m2, it is large enough to provide a major exhibition space to showcase the company's installations.

The area incorporates a dramatic backlit PVC ceiling, a sculptural central desk, and meeting rooms for visitors. But the real drama is provided by a multifaceted wood spine that winds its way through the building, unifying the different departments. At the same time it helps to separate private and public areas, and sets the tone for the design language of the entire office.

Mattoo says the inspiration for the wall came from a need to counter the monotony that is inevitable when designing large office spaces.

"Large offices tend to minimise the human scale, which can create a sense of aloofness. The wood wall becomes a connecting element; a visual marker that gives employees a sense of visual context and ownership of the space."

The design of the work space was driven by efficiency. The designer says the nature of work carried out at Clariant does not lend itself to exuberance, and it was essential to create an environment that was as neutral as possible. However, although grey and white are the dominant colours, the designers remained sensitive to the local context and used brightly coloured cushions and chair covers to enliven the space.

As the wood wall winds its way through the staff areas, a dozen or so breakout spaces are formed along its spine. Screened from the workstations by acoustic panels, these breakout spaces also serve as the setting for informal meetings – they come equipped with monitors and desks, and staff are encouraged to use them as desired.

The company's directors have their offices on the corporate floor. The managing director's office repeats the design language of the wood wall – a series of timber fins form a screen that echoes its sculptural form. The fins represent a convenient halfway point between privacy and openness.

The cafeteria also takes on a sculptural form, with organic curved wall elements. To reduce noise levels, special acoustic panels were used on the walls. These white panels, which resemble scales, are set against a bright yellow backdrop. The high acoustic performance of this space means the cafeteria can also be used for large meetings.

Most of the materials in the office are simple and devoid of excess adornment. In addition to the wood, the material palette comprises natural stone, marble, leather and fabric panelling.

"The materials we've used are often seen in projects going for LEED certification. Not that we have applied for certification, but we've kept those principles in mind," says Mattoo.

Active sustainable measures include water-saving fixtures, adhering to norms on wattage per square metre, and the use LED lighting and low-VOC paint.

By smoothly incorporating the client's brief into the design, Planet 3 Studios has created an office that not only brings the client's profile up to date, but also leaves it in good shape for the future.