Traditional bathrooms are often sacrificed in a home renovation, and more often than not it is because owners are not entirely sure how to make the look work for the 21st century.

It's a conundrum that designer Debra DeLorenzo CMKD, CMBDNZ has often confronted. The secret, she says, is to opt for a calculated mix of new and old. For example, in this renovated bathroom in a 1930s house the designer mixed contemporary tapware and accessories with an original claw-foot bathtub and a transitional painted vanity cabinet.

"The bathtub was refurbished and painted black on the underside to coordinate with the black-and-white theme of the bathroom," DeLorenzo says. "The legs are painted silver, echoing the color of the fixtures and fittings, and adding a touch of glamour. Because there was no room for a master ensuite bathroom in this house, I wanted this bathroom to be something quite special."

The pièce de résistance in the bathroom, however, is the flooring, which features ¾in-thick marble tiles left over from a conservatory refurbishment in a nearby historic house.

"The black-and-white palette makes the bathroom very classical," says the designer. "And it provides a neutral backdrop for the glamorous Nina Campbell wallpaper, which can be changed easily to completely transform the look at a future date. It means the owners won't need to update the entire bathroom – the white wall tiles and marble floor will have a long life." 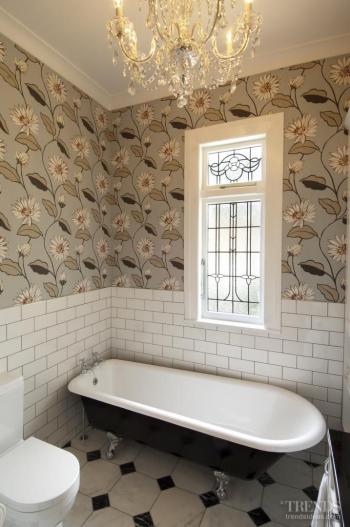 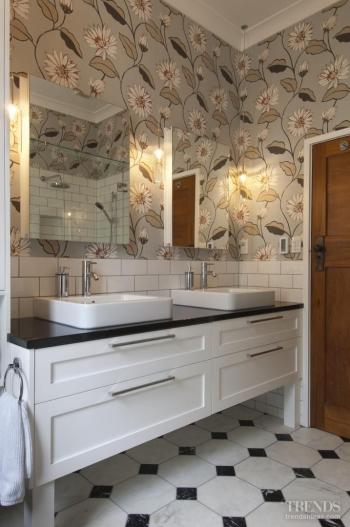 DeLorenzo says the legs on the vanity give it a furniture look that is reminiscent of an old washstand. The curved corners on the basins and a linen cupboard are also in keeping with the traditional character.

Other features of the bathroom include a large shower with a half wall that conceals the toilet from the entry.