There's a trick to it

Like a traditional Japanese puzzle box, the solution to this kitchen design required some deft manoeuvres

There's a trick to it Discover this article's resources 0

Thinking outside the square is a process that enables one to turn a perceived negative into an achievable positive.

Kitchen designer Shane George had to literally think outside the square for the design of this kitchen, set within an open-plan space that included expansive glazing, which reduced the amount of usable wall space.

"The clients were looking to create a spacious kitchen, and had already chosen the appliances. They also wanted to use wood grain, to suggest a built-in furniture look."

"The space has extensive bifold windows to a courtyard on one side and views to the inner harbour on the other. As a result, minimal wall space was left for tall elements. This, coupled with large appliances, required a design that would maximise storage space," says the designer.

Part of the solution was to fragment the traditional work triangle into a series of smaller triangles, grouping separate tasks together, and placing the associated appliances on the periphery and in the island. 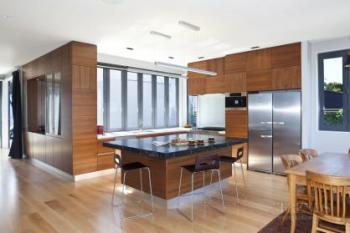 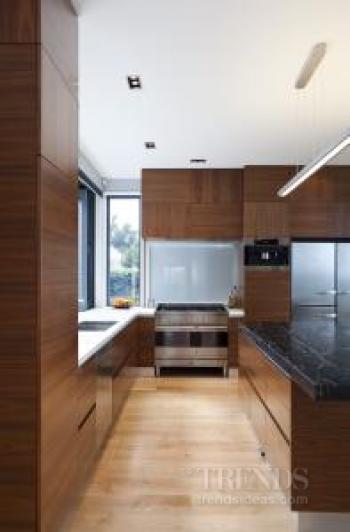 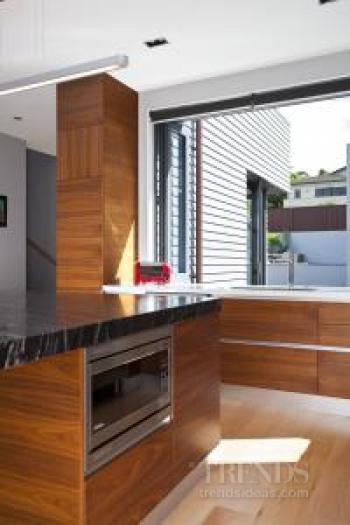 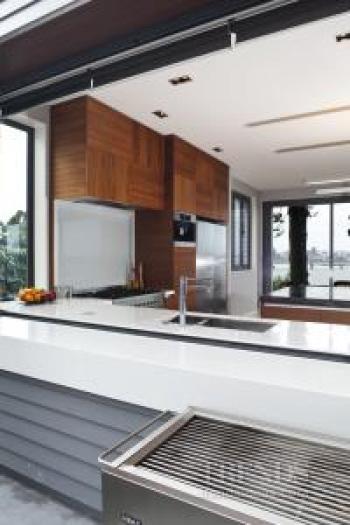 George also replaced the traditional shelf arrangement in the pantry with pull-out drawers.

"The breakfast pantry, to the left of the refrigerator, reads like a typical pantry. However, the door folds back, giving access to the drawers, along with a slide-out shelf for the toaster and coffee-making provisions. A built-in coffee machine sits above the pantry."

Extra storage for items such as platters and wine glasses is accommodated in cupboards that flow from the kitchen into the hallway area.

"In this way, the space continues outside the kitchen proper, extending its function and lending a cohesive feel to the spaces," says George.

"Alternating the grain on the upper cabinetry – a look the homeowner was keen to achieve – helps break up the expanse of cupboards by adding a visual depth that plays off the other surfaces."