Sometimes a designer is fortunate enough to be given a project where the building structure is so sound, the renovation goes more smoothly than first imagined.

Architect Lindy Leuschke says this home renovation was a pleasure.

"The architecture, structure and design of the house was very sound. Our job was to evolve a well-designed and well-built 25-year-old house, and renovate it to the taste of the new owners."

The house has three floors, with the master bedroom and bathroom previously on the third floor, and a spare lounge on the second.

"Although it was not the original intention of the redesign, we quickly saw the space potential to move the master bedroom to the second floor, and extend it into the ceiling cavity to create an adjoining master bathroom," she says. 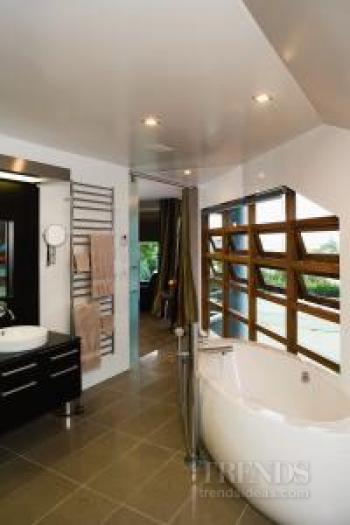 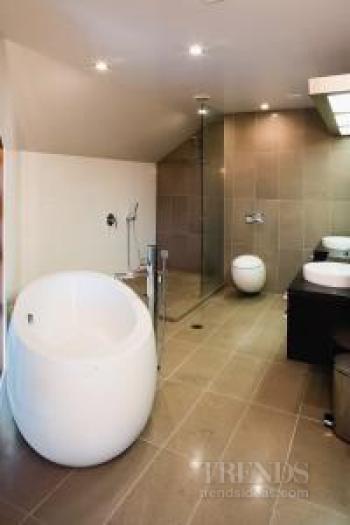 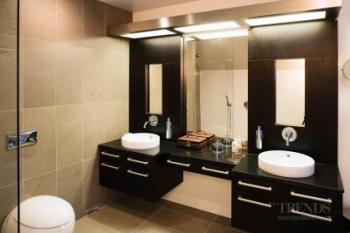 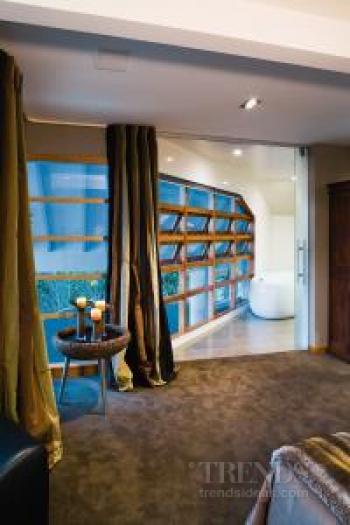 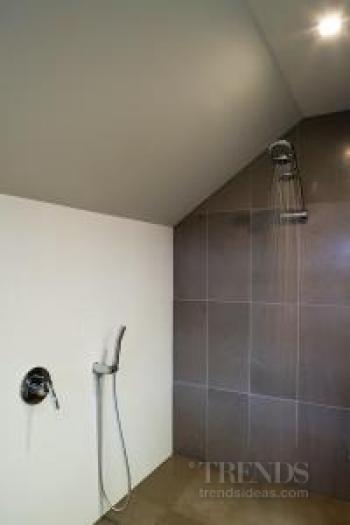 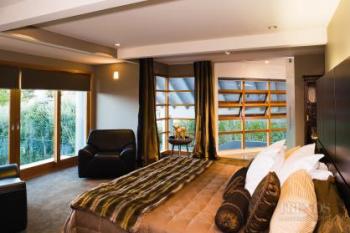 The new bedroom spills through to the bathroom space where the only visual transition is a change from carpet to tiling. Even here, the colour of the flooring is similar.

The continuation of the line and style of the louvred windows also emphasises the single space. The house has an Art Deco feel, which dictated this window style, says Leuschke.

Everything in the bathroom is large, including the floor and wall tiles. The earth-coloured natural stone tiles contrast the stark porcelain used in the bath, basin and toilet, but also reinforce the natural theme of the room, complementing the organic shapes of the bath and toilet.

The tiles, dark vanity and a ceiling curve in the recess of the room create the effect of a cave. However, the lighting and windows prevent it from being dark.

As the space was created from a gutted roof cavity, there is a large overhanging eave. This feature makes the space quite private. If the owners want privacy between the bedroom and bathroom, a hidden glazed screen can be pulled to separate the rooms.

A freestanding Alessi bath is the centrepiece of the bathroom. Leuschke says that as bathing is more of an infrequent luxury, the bath needed to double as a sculptural element.

"The bathtub is a bold statement. Its shape has a hovering effect, but its size helps to anchor it within the overall space. Thick-set stainless steel stem fittings complement the chunkiness of the tub."

Leuschke says the large shower and bath were sectioned off together, to keep the opposite wall free for the vanity.

"The owners preferred the vanity cabinets to be out of the bedroom sight line, as this is a more practical area, where people are preparing for the day."

As a functional space, the custom-designed vanity has twin basins, three mirrors and a recessed section in the middle for other toiletries and closer access to the mirror.