COMMERCE MIGHT make the world go round, but that's no excuse for exchanging dollars saved for ecological insensitivity. A case in point is Waitakere City, an eco city where a meticulously planned approach to economic development is showing that it's possible to provide sustainably designed commercial space without dramatic budgetary increases.

Central One completes Stage I of Waitakere Central, a mixed-use development that now comprises a new civic centre, a new railway and bus interchange, and a Japanese garden and civic square. A commercial office building that also incorporates retail, Central One is the next step in the plan to revitalise Henderson by attracting back some of the 60% of Waitakere City's working population who commute elsewhere in the region each day.

The building's developer, Waitakere Properties, is a Council-controlled trading organisation. The company was set up to take advantage of strategic property development opportunities within the city, in order to promote economic development, says chief executive Greg Parker.

"Our brief for Central One was to provide A-Grade, urban design-focused commercial office and retail space that embraces the principles of Environmentally Sustainable Design (ESD)," Parker says. "Our objective in providing such an offering was to create an opportunity for firms to make Waitakere City their base." 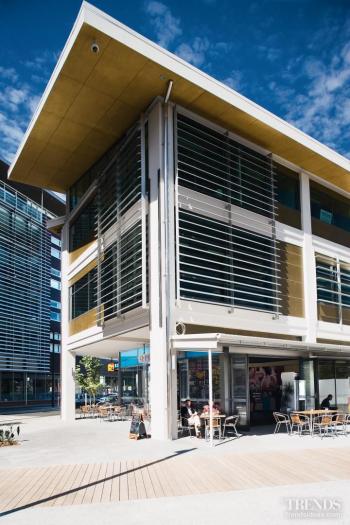 "All players are committed to revitalising Henderson and celebrating the history and landscape with buildings and urban spaces in keeping with the environment. Green space and landscaping is a key part of this."

Located at 4 Henderson Valley Road on 3.5ha of land, Waitakere Central is the city's first major mixed-use development in nearly two decades. The completed Stage I development, coupled with long-term plans to include residential and visitor accommodation, will ensure that Waitakere Central is the ‘live, work and play' hub of Henderson, says Lindberg.

"This is a unique development for Henderson in that it provides a high standard of office accommodation in a quality office park environment. Benefits, aside from the quality of the commercial space, include proximity to the new transport interchange and all the pluses of being adjacent to the Henderson CBD.

"The main challenge is the leasing of the space, overcoming price resistance – due to current-day construction costs and new fit-out costs – from local firms wanting to relocate, and the difficulty in convincing non-local firms to recognise that Waitakere Central can provide accommodation needs in a quality environment," he says.

However, many of these challenges can be overcome by the Waitakere City Council's commitment to the project. Aside from the new transport interchange, and the double-tracking of the western line, which will double the number of trains bringing commuters to the city, there are plans afoot for a comprehensive redevelopment of central Henderson's streets.

"The early focus for Waitakere Central is the expansion of office space to meet market demand. Central One brings new suburban A-Grade office space to Henderson, and with the council chambers and civic centre now occupied, the area will begin to flourish and demand will increase. Our long-term vision is to add more high-quality, sustainable, commercial and retail space, to ensure this development meets the business accommodation needs of the future."