Two interconnected boxes, one of glass and the other clad in steel, create a simple holiday home in the middle of a vast, unspoilt landscape

Ahouse built on a hill in rolling countryside is likely to have been located there to take advantage of the views. On the downside, however, the house may also be exposed to the wind.

Architect Craig Rossetti was asked to build a holiday home for a 50-acre block of rural land.

"The position was windy and bleak, so we decided to site the house on the side of a knoll, where it would have some protection from the wind as well as uninterrupted views of a small dam, the rolling countryside and, in the distance, the ocean," he says.

"To provide further protection for the house and outdoor living areas from the prevailing wind, we ran the back wall along a natural contour in the landscape, tucking the house into the side of the knoll."

The house is designed as two boxes connected by a curved spine wall, forming a corridor running behind them. At each end of the corridor is a door, at one end providing access for visitors arriving from the main road and at the other opening to the garden and pool. 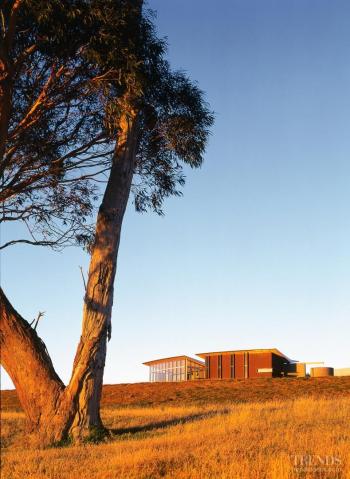 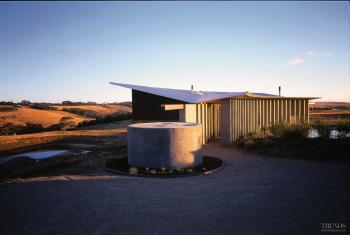 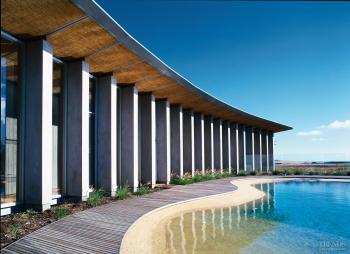 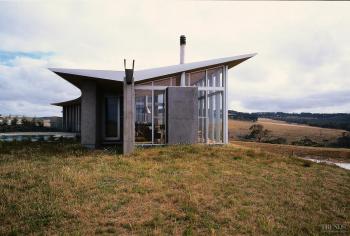 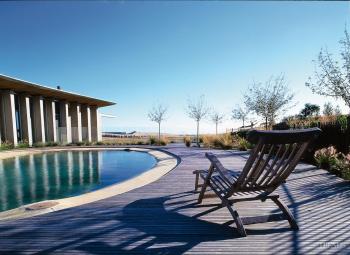 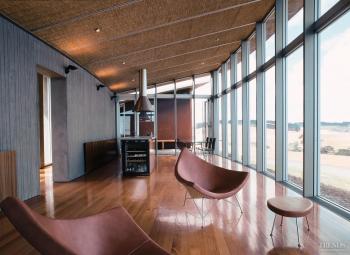 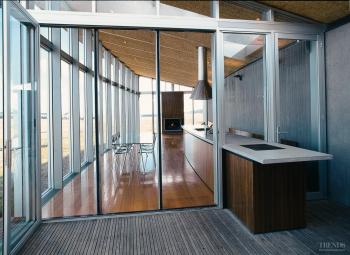 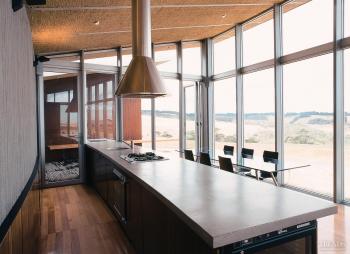 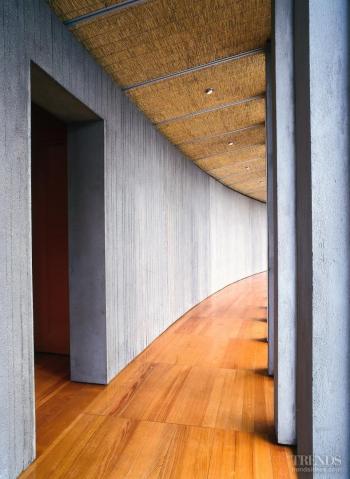 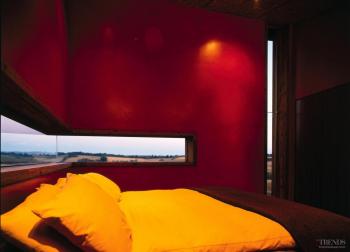 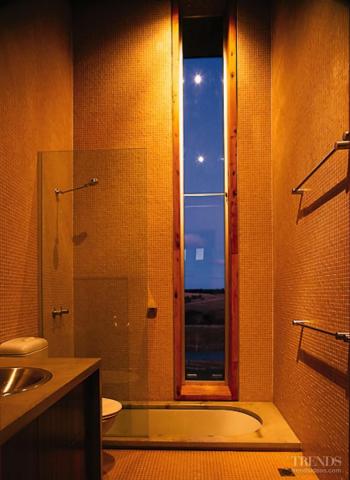 The spine wall intentionally restricts the view over the valley from the home's front entry. This is a faint echo of the traditional holiday home, where visitors generally arrive at the back of the house and walk past bedrooms to reach the living areas and the view, says the architect.

"Upon entering the almost fully glazed living area from the corridor, the full impact of the view becomes apparent."

Both boxes are similar in size, giving the house a symmetrical look. One box, with glass on three sides, contains the living area, kitchen and dining room. The second box has steel-clad walls broken only by narrow arrow-slit windows. It accommodates the bedrooms and bathroom.

"The differences in the materials used for the two boxes emphasise the difference of purpose for each space," says Rossetti.

"The living area is open and the views can be fully appreciated, while the solid walls of the bedrooms provide privacy without the need for curtains."

The bedrooms and the bathroom have narrow windows that run from floor to ceiling, framing slices of the view. The main bedroom also has a narrow horizontal window, which creates an unusual perspective of the countryside. This window is positioned at a height to allow the view to be enjoyed from the bed.

"These narrow windows concentrate the larger views that can be seen from the living area," the architect says.

The exterior wall on the north side of the corridor is made up of blades of rendered concrete separated by glass. The swimming pool can be seen in snatches through the glass between the blades when walking along thecorridor.

Because the house has been built on a curving contour, a small, wedge-shaped space between the living and bedroom boxes has created a compact deck. This areais partially enclosed andprotected from the wind on three sides by the house. The kitchen bench projects through the wall onto the deck and houses a barbecue.

The simplicity of the design is continued in the choice of materials and colours.

"The building represents a series of memories of growing up in the countryside, but with a sophisticated twist. We have used straw, rusting steel, glass and concrete for most surfaces," says Rossetti.

The ceiling is made up of a grid of straw panels separated by a negative detail of aluminium trim. The floor also picks up the grid with a fine timber inlay. The size of the straw panels dictated the grid for the overall structure of the house.

The rear wall of the living area is rendered concrete block. To add texture, the render is vertically scored and sandblasted to bring out its grain. Neutral wall colours keep the focus on the views.

Steel cladding on the bedroom box has been left in its natural state. Because the house is close to water, the steel is quickly rusting to an orange-brown colour. Bedroom walls are painted a deep orange-red to contrast with the green of the countryside.