Pomeroy Studio, the award-winning Singapore-based sustainable design firm, has announced the completion of their pioneering operational carbon-negative home: the B House, in Singapore.
The home, which is highly water, energy and waste efficient, offsets the energy requirements of its occupants through the use of solar energy, and provides surplus energy that could in the future be fed back into the grid.
The B House employs many of the passive design techniques used in Singapore’s colonial Black and White bungalows; and when coupled with modern technology, results in one of the most sustainable detached modern homes in the region at the same price point as the neighbouring residential developments.
“The owner of the B House was keen to push the boundaries of sustainable design for a private commission of two family bungalows in Bukit Timah, Singapore” said Founding Principal Prof. Jason Pomeroy, continuing, “the home sought to ensure that the occupants would never have energy bills again, and greatly reduced water bills. The challenge therefore was to create a zero carbon house at the same cost of a bungalow comparable in scale. What started as a carbon zero project would eventually become a pioneering operational carbon negative house in Singapore”
The house is orientated and shaped to minimise heat from the East and West sun – reducing solar heat gain and maximising cross ventilation through the prevailing wind. Airflow is further facilitated through strategically placed window openings and high ceilings. North and South façades comprise of low, medium and high-level windows and shutters that act like a series of valves in a similar fashion to its historical predecessor. 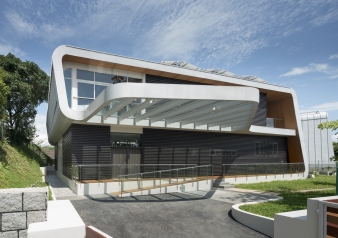 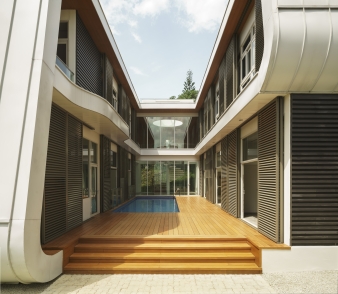 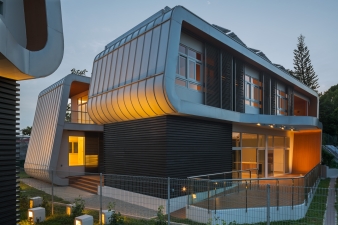 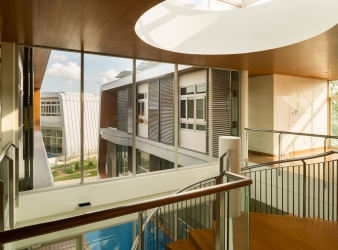 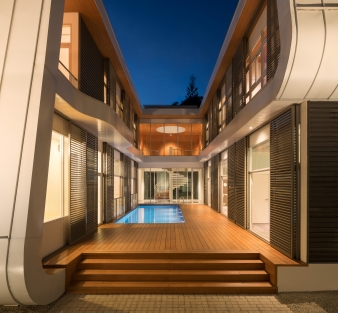 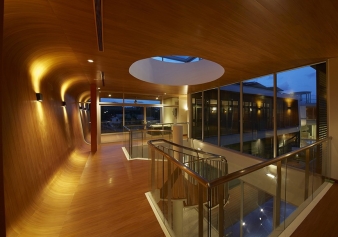 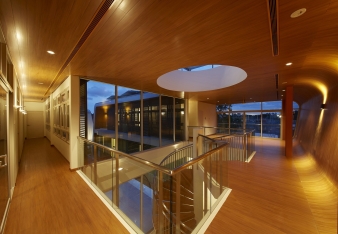 These can be opened and closed in multiple configurations to regulate airflow, prevent rain, and provide shade whilst filtering light during the hottest or wettest seasons. Daylight penetration is further optimised through shallow floor plates that permit all habitable rooms to receive 100% natural light.
Verandahs line both wings of the house, channeling cooler air into the interiors, and the central Courtyard is strategically placed between the more public formal reception area and private areas. This ensures that natural light and ventilation percolate into the interior spaces, and also acts as an outdoor social space.
The design of the house is modular, allowing pre- fabricated modules to be manufactured off-site, improving quality and reducing wasteful off-cuts. This pre-fabricated ‘kit-of-parts’ also increased the speed and efficiency of construction by 50% as compared to a similar sized residential building. Furthermore, materials with low eco-toxicity and high recyclable content were used throughout, and water-harvesting equipment with a water saving system forecasted to save up to 465m3 of water per year. The household energy consumption for a typical family of five in a ‘normal’ home is estimated at 12,500 kWh per year, while a family of five in the passively designed B House is estimated to consume approximately 8,000 kWh per year. The 100m2 of polycrystalline photovoltaic solar panels on the roof are expected to generate 16,720 kWh per year, meaning that the B House effectively acts as power station that provides surplus energy that could be supplied back into the grid for income generation.
The B House has been awarded the Building Construction Authority’s (BCA) Green Mark Platinum Award, the highest award for environment-friendly buildings in Singapore.